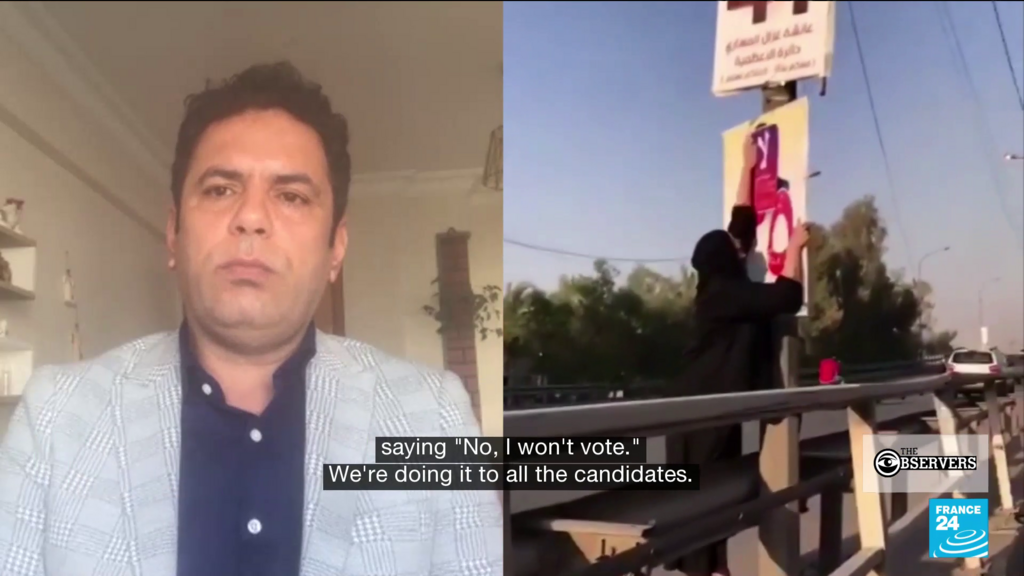 Calls for a boycott of Iraq’s legislative elections have been circulating on social media, with activists sharing pictures of themselves with campaign posters or stickers saying “No, I will not vote.” Turnout is expected to decline on election day, October 10. Activists cited growing corruption and the power of pro-Iranian militias, both of which were key issues in the 2019 protests that were violently suppressed in Iraq.

The call for a boycott of the next election comes after a series of assassinations of pro-democracy activists. More than 70 workers have been killed since the protests began in October 2019. The killings – which activists believe were carried out by pro-Iranian Shiite militias within the Popular Mobilization Forces (PMF) – have not been punished.

The PMF consists of 60 to 70 armed Shiite militias. It was formed by the Iraqi government in June 2014 after Shiite cleric Ali al-Sistani called for jihad against the Islamic State group following the attack on Mosul.

No group has claimed responsibility for the killings, but both pro-democracy activists and the United Nations believe they were carried out by militias. The power of Iranian-funded armed groups in the country is growing.

We spoke with Samir al-Saadi, a spokesman for the “Change for Iraqis” campaign, which is leading the boycott effort. He told us that the killings had not been prosecuted or investigated. According to Saudi, militias are involved in politics and even have representatives in the government and parliament.

Demonstrators have been killed, targeted killings, kidnappings and violence – none of which have ever been seriously investigated. Not a single accused went to trial. We will not vote until the killers of pro-democracy activists are punished.

Glasgow shooting: A man was shot dead in Milton shortly after the murder investigation began.

“One employee was recently re-vaccinated.” Putin explained why he was isolated.