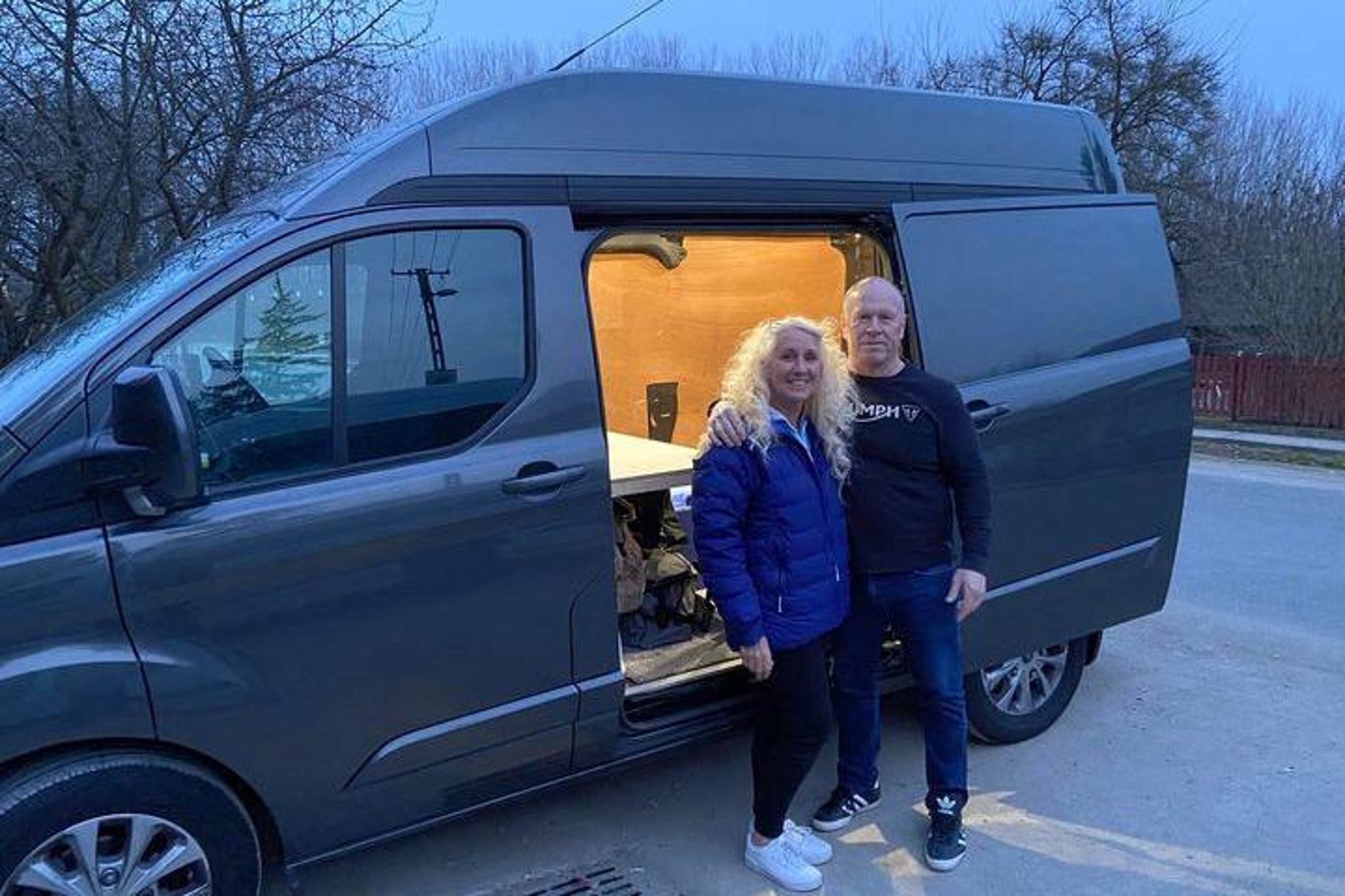 Neil Robinson, 60, his partner Hilary Wheels, also 60, and friend Mark Stevens, 57, left the village on 13 March and, after traveling 3,000 miles across seven countries, returned to the UK on Saturday.

Neil was inspired to go on the trip after talking to Carl Simpson, the owner of Fox at Roxby.

Carl and his wife Alison were packing for the people of Ukraine, and he told Neal, “If I didn’t have two kids, I’d go myself.”

Hilary Wheels and Neil Robinson, two of three brave men who traveled across Europe to help the people of war-torn Ukraine.

This made Neil think that there was a second local muster in badger hounds, and since there was too much stuff in one wagon, Neal volunteered to go too.

He was joined by Hilary, a retired nurse, and former cop Mark, both hoping to be helpful on the trip.

They said they never considered the risks they were taking. Hilary said: “We drove some distance from the conflict, but not from the refugees.

Refugees arrive at a reception center in Tisabech.

“If we thought too much about it, maybe we would think we’re not too sure about going.”

The three conditions mentioned that Ukrainians face are complex.

Neal said, “There is definitely a need there.

You wonder how it will be.

Neil Robinson, Hilary Wheels and Mark Stevens who traveled from Hinderwell to Ukraine.

Mark said: “At first we were told that the need was urgent.

“That need has now been met, well, that was our point of view anyway.

“The need is changing now, for example, three hours from where we were, there is a big Tesco and it has everything.

“Hilary and I all our lives went towards things, any incidents.

“It gave me the opportunity to rediscover what I was missing in my working life.”

The group delivered their belongings to Tysabeks, which they say is best described as a community center run by Baptista, a Hungarian charity on the border with Ukraine.

The arrivals at Tisabex are overwhelmed with everything, people traveling from east to west in big yellow school buses.

Hilary said: “It’s really only women and children, no men. We handed out chocolate bars to the kids who looked exhausted.”

Those who arrive are given priority in terms of need.

Their basic needs for food and clothing are met and then they wait to be picked up by friends and family.

Temporary housing is not enough.

Hilary said: “When we left Tysabech, we traveled through the sparsely populated Hungarian villages, it was terribly quiet, it seemed that everyone had left.”

Neil said, “Even along the way, as we approached the Hungarian border, it became obvious that traffic had stopped.”

On the way back, the trio stopped at a hotel.

The group’s Facebook post continued the story: “Drinking a well-earned pint of beer, a young family with four children signed up.

“They looked tired and miserable, we were shocked and felt that we could help them a little by paying for their rooms from Hinderwell’s kind and generous donations.

“In the morning, the Ukrainian family was emotional and grateful for this gesture.

“Tears flowed as the children thanked us with a picture they drew for the Hinderwell team.

“We left Hungary in many cars full of fleeing families.

“We parked next to a family who had to leave their home in Odessa yesterday morning.

“Leaving my 60 year old mother who was going to stay and fight.

“Their story was absolutely heartbreaking.”

Mark said: “Each person who comes out will have a story.

“We couldn’t have done this without each other, it helps the journey when there are three of you supporting.”

Another Facebook post read: “Our journey has been a roller coaster of emotions we will never forget.

“The people we helped along the way will always stay with us.

“We are considering sponsoring a hotel room near the Ukrainian border where refugees can rest and eat before continuing on their journey.

“We all have one reflection of the last five days: despite the horror of war and all the other problems that the world has faced over the past few years, in the vast majority of people there are far more good people than bad ones.”

Perhaps Mark summed it up best when he said, “Looks like we took a piece of Hinderwell to the reception center—we even took the cake.

“It was about sending a signal of solidarity and care, helping people understand that they are not alone.

“The community has come with us in spirit.

“Three of us took a van with things, but we took with us a message to Ukraine from our entire community.”

Neal, Hilary and Mark are now planning to raise money to pay for a hotel room to help those fleeing the conflict.