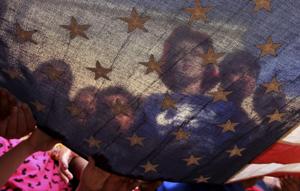 SHANKSWILLE, PA – In the vast field where the plane crashed so many years ago, everyone is silent.

The hills around Shanksville seem to swallow the sound. The plateau on which millions of Americans travel to Flight 93 National Memorial think of those who died in this southwestern Pennsylvania area, sitting just above the landscape, with pockets of calm. Where it is necessary to be calm.

This is a place that encourages the process of remembering.

Twenty years have passed since United Flight 93 made its final descent, and chaos is spreading as buildings burn 300 miles to the east. About one-fifth of the country is too small to remember the day that changed everything.

A lean man in a leather Harley-Davidson vest is talking to two companions at the monument’s view. He points to the patch where the plane crashed. It’s an intimate conversation, and it’s hard to hear what he’s saying.

But the first two words are clear:

Remembering is not just a state of mind. As those who urge us to never forget the Holocaust have long insisted, this is a process. And when humans experience loss and trauma, the process of remembering takes many forms.

Remember it is political. Those who disagree about the fate of Confederate statues in the American South show that those who argue about the war on terror and its aftermath of 9/11 Should be part of

Many wear coats to remember. It comes in Ground Zero celebrations and moments of silence and prayers, both public and private. It manifests itself in folk monuments, such as to mark traffic death sites on the side of the road alone. It embodies the names of places, such as the road that leads to Flight 93 Memorial – Lincoln Highway. It comes to the fore in the retrieval of “flash bulb memories” – the places where you were – the moments when it happened that live with us, sometimes right, sometimes not.

And for generations, memories have been presented to us in monuments and monuments, such as Shanks Wells, to communicate and build, and to evoke and ignite the memories and emotions of people and moments in specific ways.

“Monuments go down in history. They are shrines that celebrate the ideas, deeds and heroes that existed at one moment in time,” architectural historian Judith Dupree wrote of them in his 2007 book – a The book on which he first published to his publisher, All Dates, September 10, 2001.

Then, what does it mean to remember the 20th anniversary, or at some point when an event like 9/11 begins to revolve around the past – history begins to form – even its echoes are still everything The foundations of are shaking.

Evidence of this is evident in the events of the past five weeks in Afghanistan, where the 20-year war began in direct response to the 9/11 attacks: once again with the oppressive and violent Taliban.

“If we were still in Afghanistan and things were stable, we would probably remember 9/11 in a much different way,” said Richard Cooper, vice president of the nonprofit Space Foundation. The Department of Homeland Security has seen many memories for years and years after the attacks.

“The pain and agony we felt on the morning of September 12, 2001, is reviving itself,” Cooper said.

Even in more stable forms of memory, such as Flight 93 National Memorial, the question is to what extent memory changes and evolution hang in the balance.

At the center of the visitors, the momentary, painful patterns still bring the past back with amazing performance. The twisted, stained cutlery from the flight food is a particularly breathtaking sight. But the different types of memories that are presented at a distance of yards from a calm gaze and its thought-provoking memory feel more permanent, more eternal – and now, 20 years later, it is more appropriate than anything that The race was first.

The memorial’s main architect, Paul Murdoch of Los Angeles, says the memorial was carefully calibrated to resonate in several phases of the memorial about the ceremony and its implications.

“You can imagine a memorable approach that freezes anger over time, or freezes fear. Work in a different way.

This question is especially strong on this 20th anniversary. Society marks races in two decades of packages, so there is a whole that has been born since the attacks and has come of age. This hardly means that they are not paying attention, even though they “remember”, even if they are not around.

Christine Batchu, a professor of psychology at Le Moin College in Syracuse, New York, studies how nostalgia works. She found something interesting a few years ago when she was researching how young people encountered stories that resonated with them – both personally and through the news.

Even those who lacked vivid memories of 9/11, Batchu says, responded with stories about the event. It was remembered as a shared experience.

And no wonder. Many of the first encounters with 9/11 on the day it happened, in the tradition of the information age, were both separate and sectarian. People in different parts of the country and around the world, in very different circumstances, saw the same live camera angles on a few feeds, as well as the same, now unimaginable scenes of destruction. They tested it separately, but together.

It creates a kind of sectarian memory, even if sometimes the same people who saw the same things don’t remember them that way – a certain camera angle or vintage point, the comments of an important person, the events Exact continuity. That’s the decent thing to do, and it should end there, experts say.

“We recreate the event with our own lenses, and part of that lens is very social,” says Batcho. “You would think that memories would be more cohesive and consistent. It turned out to be much more complicated than that.”

May 31, 2002, less than a year later. Former New York Mayor Rudy Giuliani told high school students in Shanksville on the eve of his inauguration: “A hundred years from now, people are coming and wanting to see it. And they want to know what happened.”

September 11, 2016, 15th birthday. President Barack Obama says: “Fifteen years may seem like a long time. But for families who lost a piece of their heart that day, I imagine it may seem like tomorrow.”

That basic tension – it feels like yesterday, yes, but it’s also becoming part of history for the long haul – is what we face in the days to come as many people reappear. And consider 9/11 and remember your actions.

For those who were not at the center of the horrors of 9/11 and its pain but experienced it as part of the culture in which they live, it somehow felt both yesterday and long ago together. Can manage to And as with many memory actions, it is still being debated and debated – and will continue to be so for a long time to come.

9/11 historian John Bodnar wrote in a May Post Washington opinion piece, “Extraordinary events should not mislead us into thinking that public memory of this horrific event is a matter of course.”

Like an important birthday, especially with an earthquake like 9/11, it’s easy to get back to William Faulkner’s thoughts: “The past is never dead. It’s not the past.” But this saying has been tolerated for a reason.

Memory becomes history. And history – shared history – is held firmly, sometimes ruthlessly. That’s why so many people firmly understand satisfying, old historical narratives – even when they appear to be as destructive as they were productive.

The process of remembering something like 9/11 involves the same delicate balance. When memory becomes history, it can be more distant, like a memorial to a revolutionary war for those whose feelings and sacrifices have faded over time. With distance, it can calculate.

Of course, this is not going to happen with 9/11. Its politics are still going on. The arguments he created – and the way he sent society in a different direction – are as strong as they were in those early days.

And when a nation stops to remember the morning of 20 years ago when it was attacked, it is not just looking with its hand on its shoulder. It is looking around and thinking: What does this mean for us now?

“What’s important in commemorating, what do you remember and how do you remember it?” Jay William Thompson expressed surprise in his beautiful 2017 book, “From Memory to Memorial: Shanksville, USA and Flight 93”.

Any answer to this is understandable, complex. But behind all the formal words and methods in the memory of the day that disturbed the world, there are some other basic things hidden: a simple essential thing and how to understand how to change things.

On the cover of Thomson’s book, a man looks at the scene of Shanks Will’s accident, his right arm raised. His left hand is painted with four words, a proclamation: “I have not forgotten.”

The Glasgow Water Bus and M8 Garden projects are being considered by councilors.

Putin said the law on “foreign agents” needed to be improved.