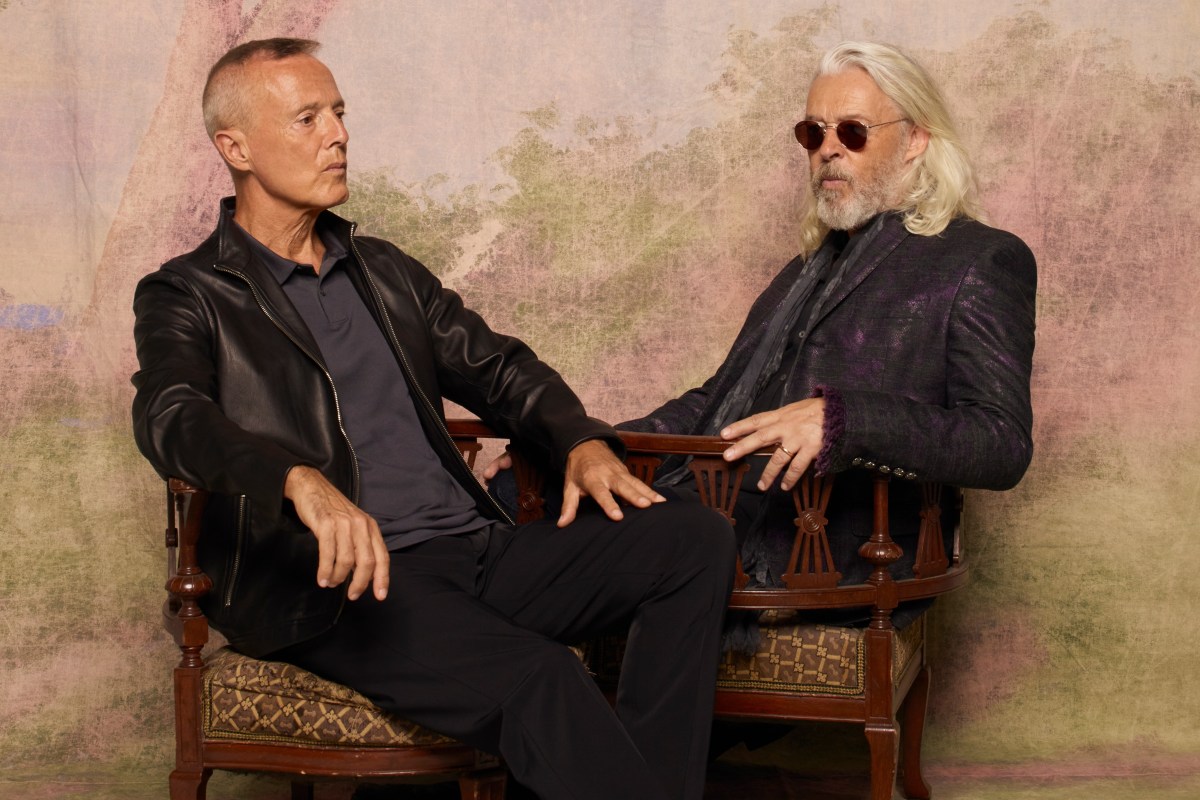 “THE CHALLENGE was to make an album that represents us at 60,” says Roland Orzabal.

“How can we share our life experiences, good and bad, and do something that will speak to people. Our best work, work that has lasted for years, is something that resonates with people.”

Tears For Fears – Orzabal and Kurt Smith – recall why an early version of their excellent new and seventh studio album, The Tipping Point, was canceled and relaunched when both decided it was “just not Tears For Fears.”

Their old manager inspired them to work with other songwriters, including Bastille’s Dan Smith and Sasha Skarbek, who wrote James Blunt’s “You’re Beautiful” and Miley Cyrus’s “Wrecking Ball”.

And while they were happy with some of those songs, they didn’t feel right for a Tears For Fears album.

Orzabal adds, “Our then manager didn’t want to sell us as recording artists anymore.

“He wanted us to just be like traditional artists. The first time he saw us play live in Dallas, he saw we were good and wanted us to tour.

“He immediately saw the potential profit from the tour, but he didn’t instinctively trust us to just mind our own business and make a real Tears For Fears album. He wanted to inject some alien DNA, shall we say.

Having written such classic pop songs as Mad World, Shout, Everyone Wants To Rule The World and Sewing The Seeds Of Love, it seems absurd that the duo, who formed the band in Bath in 1981 after meeting as teenagers, were not inspired to write songs. the album itself.

Orzabal continues: “He said at the time, ‘Think of Tina Turner when she came back and worked with Heaven 17. That’s what I want.’

Now with the same manager taking care of Harry Styles, Orzabal and Smith are looking forward to the future.

I meet a friendly couple at a hotel in central London where they are on their third day of a grueling promotional round of interviews and radio appearances.

They are tired but still enjoying the recording of Monday’s magical BBC Radio 2 Piano Room session with the BBC Concert Orchestra.

“We really enjoyed playing with the orchestra. This is something we want to do more of.

“But it was weird looking back at me with my magical hair,” Orzabal says of the white mane that now replaces his old dark hair.

“You can see that we have aged physically in The Tipping Point video – we are not trying to hide it and mentally we are still quite young.

“And aside from the horror these guys would have if they saw us at 60, they would listen to the album and be so impressed that they probably wouldn’t make another record.”

The Tipping Point is a majestic record that will bring the duo great recognition.

The couple enjoyed a renaissance with Lorde’s cover of “Everyone Wants To Rule The World” and Gary Jules’ version of Mad World, while The 1975, Kanye West and The Weeknd cited Tears For Fears as an influence.

“Our old manager wanted to cash in on this and start mass production, but we didn’t agree with him,” says Orzabal.

“It’s like with Coldplay – Everyday Life – is that they go beyond the possible. This is an excellent album. I went to LA to see them and loved it, but Music From The Spheres is an industry album. Their work with BTS comes with commercial expectations.

There are so many areas of mental health that we just don’t understand.

“I listened to this album once and just didn’t get it.”

Fame was never the goal of Orzabal and Smith.

The practical couple often shunned the spotlight, preferring to spend time with family.

They dropped Live Aid as they needed a vacation, and it’s been 17 years since the release of their last studio album, Everyone Loves A Happy Ending.

The couple sold over 30 million records worldwide, but did not speak for ten years when Smith left the group in 1991 and moved to New York.

Smith, who lives in Los Angeles, says: “We actually released more greatest hits than albums. We had huge breaks between some records because of life.

“When we both had children, we focused on being close to them because we were both born into families where fathers were absent.

“Then touring became very successful, which meant we could go away for two months in the summer and then come back with some money and have some fun.”

“Yes,” adds Orzabal. “We had some pocket money and family life – a happy family was more important.

“We were pop stars when we were kids, and as we got older, we didn’t see ourselves that way.”

Never shy about taking on the hard stuff, Tears For Fears’ songs deal with depression, political protests and domestic violence.

And it was he who wrote about the heartbreaking loss of his first wife, childhood sweetheart Caroline, in 2017 that allowed Orzabal to return and finish The Tipping Point and mend his friendship with Smith.

Married for 35 years, Caroline struggled with menopause and alcohol, both of which contributed to her death.

Our old manager wanted to cash in on this and put us into mass production, but we didn’t agree with him.

She was ill for five years and developed alcohol-related dementia.

Orzabal says: “There are so many areas of mental health that we just don’t understand.

“If someone suddenly changes personality, if they suddenly turn from an extrovert to an introvert, it’s hard to understand.

“Caroline lost her parents when they were young and I don’t think she ever realized it.

“She was always obsessed with death, like her mother at that age, but she didn’t even live to that age. She was 55 years old.

“The songs about Caroline, The Tipping Point and Please Be Happy were written while she was sick.”

Smith’s “Please Be Happy” is a heartbreakingly beautiful song.

Orzabal says: “You never believe that someone will die. If something gets too painful, you don’t process it, so songwriting is therapeutic.

“But I still can’t listen to that song, and when I first heard Kurt sing, it was hard. Oh, I’m crying now.”

The sadness is still visible. “The way we programmed the album is very important.

“My Demons hit you in the face. Then, just as you’re about to give up, the River of Mercy creeps in and you feel a tingle down your spine.

“But it does soften you up for a killer, please be happy, which is excruciatingly sad. So sad that I left the studio when we were doing playback because this song just destroys me.”

Roland and I are like a marriage, and like any marriage, we tend to blame each other when things go wrong. On the 2019 tour, we got to the point where we didn’t really talk to each other.

Smith says it was hard for him to see his friend mourn his loss.

“It’s hard to watch someone you grew up with go through that pain, but the only thing I could do was walk away from it. It didn’t help us get along.

“Roland and I are like a marriage, and like any marriage, we tend to blame each other when things go wrong. On the 2019 tour, we got to the point where we weren’t really talking to each other.”

Orzabal says 2018 has been a bleak year for him. “Caroline died and something physically went wrong for me.”

He had a seizure and ended up in the hospital, as well as voluntarily staying in rehab twice while battling side effects from painkillers.

Orzabal says, “It took me the best part of this year to get back together.”

In 2019, Orzabal, who has now found happiness with second wife Emily, decided to get back in touch with Smith and the pair met for lunch before returning to Kurt’s house to jam, which they haven’t done in years.

The result was the album opener No Small Thing.

A collaboration between two friends without any interference from a manager or label.

Orzabal says: “I wanted to move forward. There were about five tracks that we started working on and I needed to reconnect with Kurt. It wasn’t difficult at all.

No Small Thing is one of the outstanding tracks.

The Tipping Point is an album of the real. There are some very contemplative songs, there are some sadder themes, but it still leaves a feeling of optimism.

But there is not a single stupid track on the album.

Rivers Of Mercy, Long, Long, Long Time and Master Plan are the best songs that Tears For Fears have ever made.

And the couple is already looking to include new songs when they tour the US in May and arrive in the UK in July.

“I had the idea to start the show with No Small Thing,” says Orzabal.

“But I need to talk to Kurt about this.

The Tipping Point is an album that reconciles Tears For Fears and re-evaluates their place in music history.

But most importantly, it made them re-evaluate their friendship.

“We know how much we mean to each other and what is important to us,” says Orzabal. “You can hear it on this album.”

Smith says: “The Tipping Point is a modern record. There are some very contemplative songs, there are some sadder themes, but it still leaves a feeling of optimism.

“This is the best Tears For Fears album and we are both so proud of it.”