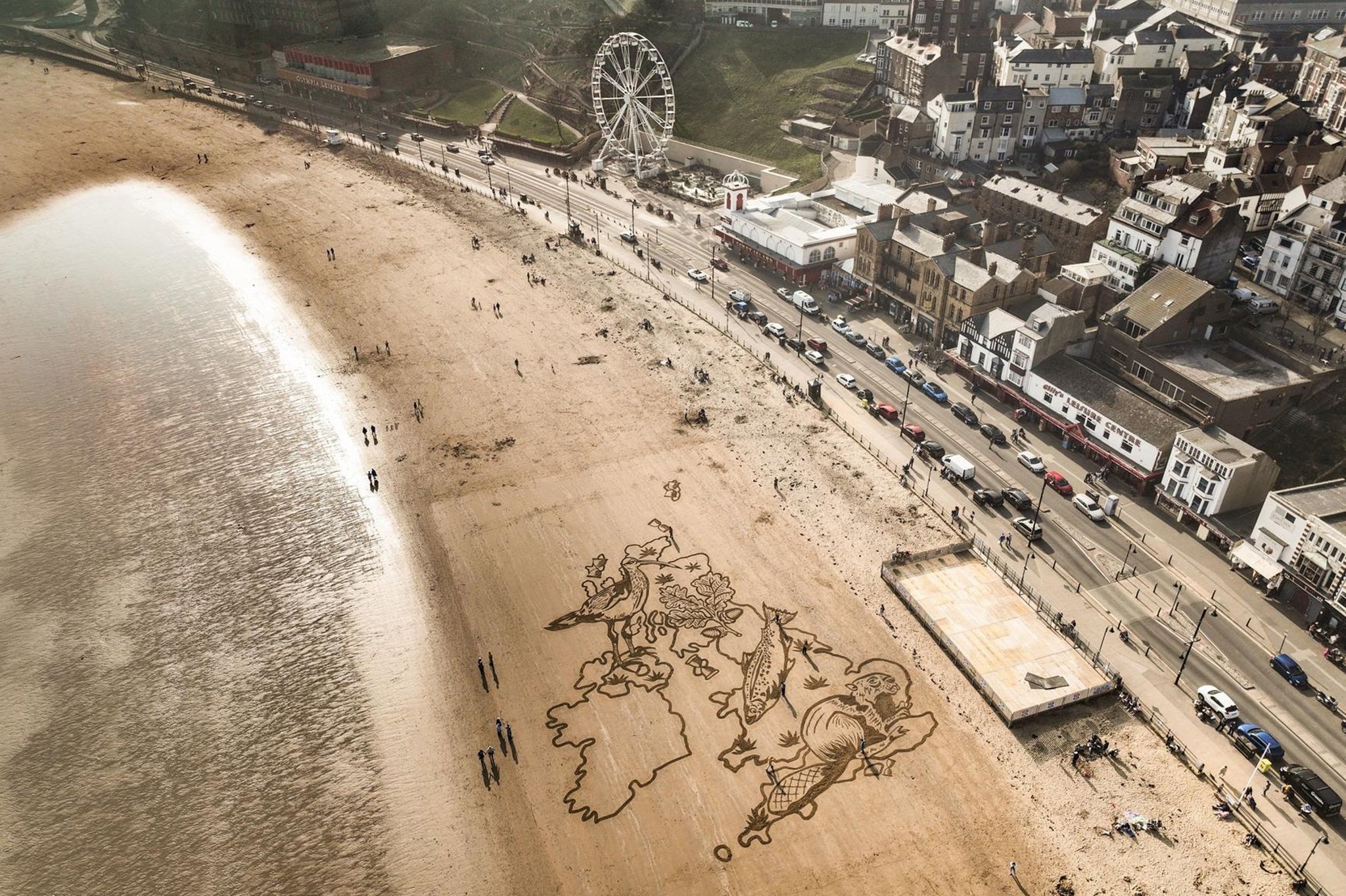 UK Youth for Nature has joined forces with Sand In Your Eye, the RSPB and others to create a giant sand painting in Scarborough South Bay showing the UK featuring oak leaf, curlew, salmon and beaver.

The drawing was engraved yesterday morning ahead of Saturday’s Earth Hour and coincided with United Nations environmental talks taking place in Geneva.

Later that day, it was swept away by the tide, symbolizing young people’s dismay at the disappearance of wildlife in the UK.

A huge sand painting at Scarborough Beach was created to highlight young people’s anxieties about the loss of wildlife in the UK. UK-based Youth for Nature has joined forces with Sand In Your Eye, the RSPB and others to create a giant sand painting featuring oak leaf, curlew, salmon and beaver in the shape of the UK.

Yorkshire is one of the most important locations in the UK for curlews and this was one of the reasons Scarborough was chosen for the project.

Jane Williamson, co-director of Nature Loss: Lines In The Sand, said: “We wanted to come to Scarborough for several reasons. We were working with Sand In Your Eye based in the north so we wanted to support them and wanted to be outside of London and somewhere in the middle of the UK to repeat our message.

“Scarborough was amazing. When we walked to the beach, the sea sparkled, the sky was blue. We really liked it here, it’s a beautiful city.

Sea Eagles: Watch the moment a rare sea eagle chick is fed for the first time after…

Young people and members of wildlife groups have dug up images in the sand in Scarborough to draw attention to wildlife issues in the UK.

According to the 2019 State of Nature report from environmental organizations, 41 percent of species in the UK are declining, and 13 percent of them are nationally threatened.

They also say much more needs to be done by the four British governments at local, regional and national levels to stop wildlife extinction and habitat pollution, restore lost animals and plants, and ensure that farms and the countryside are a better home for wildlife as the climate changes.

The group is calling on the governments of all four countries to set a goal of halting the loss of nature in the UK by 2025.

UK-based Youth for Nature will also work with local wildlife and conservation organizations to develop regional policy issues relevant to Yorkshire and North East England, using the drawing as a springboard.

Talia Goldman, co-director of UK Youth for Nature, added: “As today’s youth get older, some of the most iconic views of the British countryside may already be lost forever. The UN Biodiversity Conference is a once-a-decade chance to set new global goals for nature.”