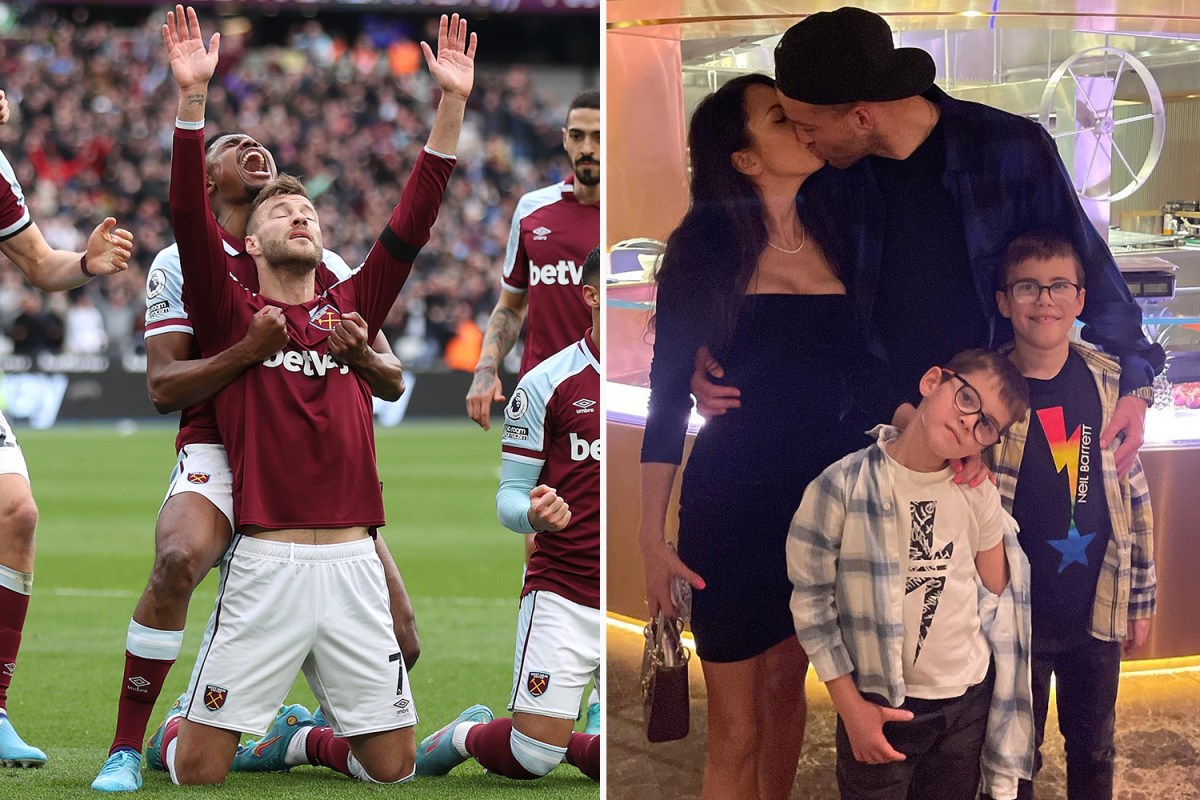 ON THE MORNING OF FEBRUARY 24, the whole world of Andrei Yarmolenko collapsed.

A day earlier, he said goodbye to his wife, Inna, and one of their children as they flew back to the Ukrainian capital, Kyiv.

Never in his wildest dreams did he imagine waking up in London to hear the news of the Russian invasion and the sudden fear that his family and friends were in imminent danger.

Speaking for the first time since the start of the war on the Ukrainian YouTube channel Futbol 1/2/3, the 32-year-old West Ham striker said: “When it all started, on February 24, I arrived at training and couldn’t even speak.

“I was in tears. I asked the coach to let me go home, and then I asked myself: “What should I do next?”

“I didn’t believe it could happen. I sent them to Kyiv because my child had to undergo a routine examination by a doctor.

“Can you imagine what I was like when it started the next morning?

“I just wanted to run and beat my head against the wall – what a fool I was sending my family to Kyiv, while I myself am sitting in London.”

Hammers manager David Moyes could not have foreseen these events either.

He talked about how helpless he felt in his attempts to provide comfort and support, and also said that in the first week, Yarmolenko was on the phone with his family almost 24 hours a day.

Fortunately, his wife and child are safe. The star also admitted that despite the best efforts of Moyes and West Ham, his thoughts could not be far from football.

Yarmolenko added: “Now, when I’m training or when I’m playing, this is the place where I can switch off for a couple of hours from all the problems.

“It’s good for you, but when it all started, I didn’t sleep, I didn’t eat, I was constantly on the phone, calling my relatives.

“David Moyes told me that I have the choice to train or not and that I have to do everything I can to keep my family safe.

“I didn’t show up and then I realized I had to stay professional so I came back. I’m just going crazy and you need a distraction.

“I read everything that happens on the news, and then I watch some football or a movie.

“But even now I don’t know what the other results are. That’s just the training ends, and then the call – all the relatives are alive and well.

You can hardly blame Yarmolenko for not being overly interested in the club’s top four race or their incredible European journey.

However, he has more than played his part since returning to action against Aston Villa on 13 March in a 2-1 victory.

He then scored in injury time to get Sevilla into the Europa League, securing the club’s first European quarter-final in 41 years.

But his celebrations were muted as he closed his eyes and looked up at the sky with tears streaming down his face.

Yarmolenko admits that before these goals, he saw fans on social media who wanted him to leave in order to withdraw his salary from the account.

He added: “Now I feel love and respect from all the fans because they see how our country is struggling. They are trying to support us.”

Earlier this month, a Russian airstrike in Chernihiv, where Yarmolenko was born, killed 47 people.

When asked who else was there, he said: “My cousins ​​help keep in touch with uncles, aunts.

“Those in the places where shelling is constantly going on are in a bomb shelter. They hide in basements, like all people.

“To be honest, it’s scary to talk about it – to think about how the fighting is constantly going on when I saw what was being done with the villages.

“I am now without tears. It’s impossible to accept.”

Yarmolenko spoke about how his Ukrainian teammates are doing their part to help their country. Some took up arms, others help with housing, medicines and finances.

After the first explosions, Yarmolenko called the mayor of Chernigov to ask “what is needed for the military.”

He added, “My message is that not all people can fight. Not everyone knows how to shoot. Now we must help each other. If we do not do this, no one but ourselves will help.

“I am sure that no country will definitely beat us, so I try to help my hometown.

For now, Yarmolenko agrees that a show of strength to continue representing West Ham on the pitch is all he can do.

He said: “You see all these people in the stands with Ukrainian flags, you see how your relatives and your own people are fighting – how can you go out there without playing football?

“Go and fight like your people fight. Thank God, I managed to score important goals for the team and show how strong we are, no matter what happens to us.

“No one can ever break our spirit.”