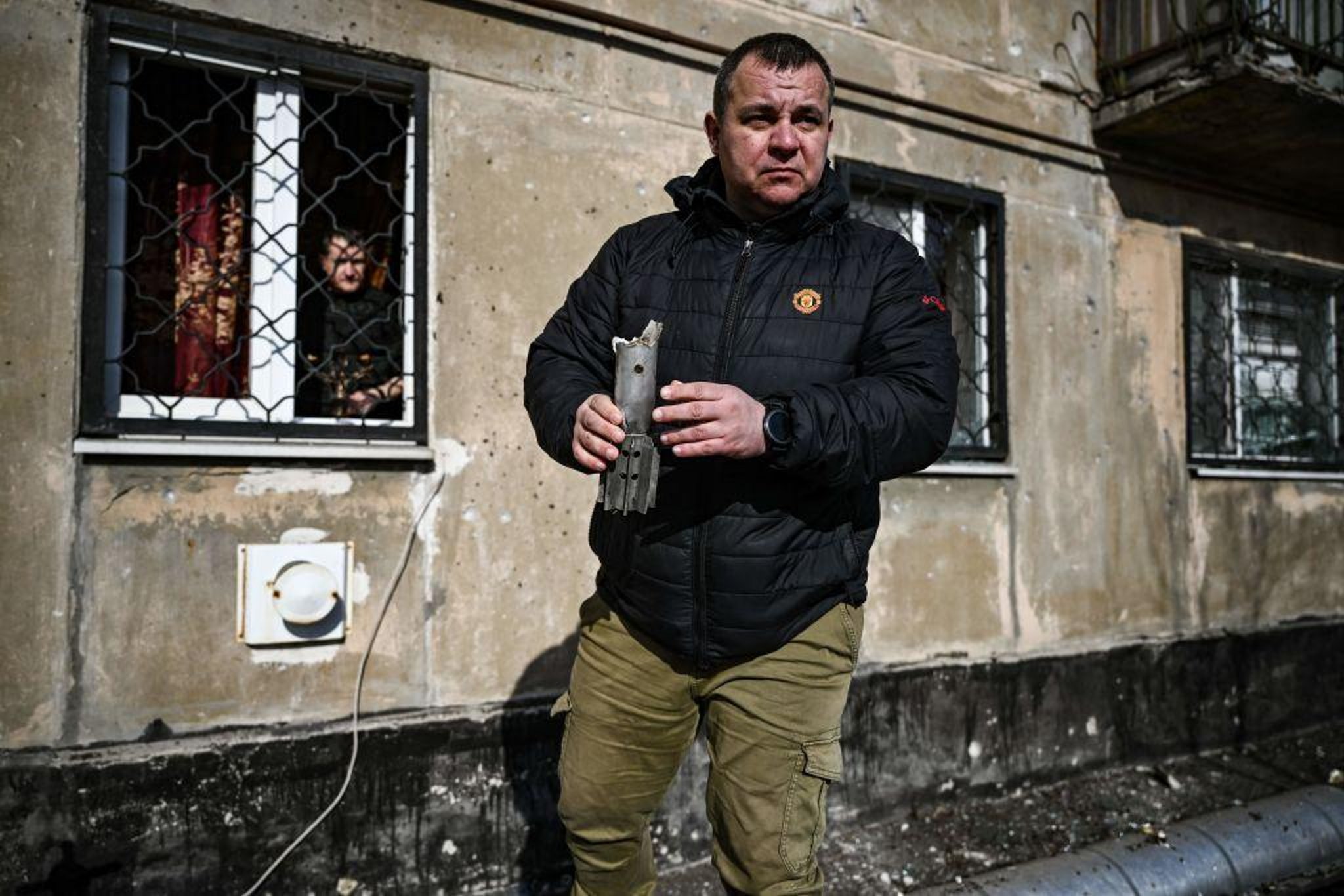 He told citizens that Russia, in particular former leader Vladimir Lenin, created the modern Ukraine and claimed that the nation never had a truly independent statehood.

He and his officials painted a picture of Ukraine as a Western-controlled puppet government in economic trouble.

The Ukrainian People’s Republic was established in 1917 after the revolution in Russia. However, it did not gain full independence until 1991, when the Soviet Union collapsed and the breakaway states declared independence from Moscow.

A man holds pieces of a mortar that exploded in front of a building in the town of Shchastia, near Luhansk in eastern Ukraine, February 22, 2022, a day after Russia recognized the breakaway republics in eastern Ukraine and ordered the Russian army to send troops there as “peacekeepers” .

For the past 30 years, Ukraine has operated as an independent nation, albeit with constant tensions with neighboring Russia.

The most recent escalation of the crisis came after Mr Putin demanded the West bar Ukraine from ever joining NATO, a 30-nation defense alliance.

On Monday evening, Mr. Putin dismissed NATO claims that it was a “peace-loving and purely defensive alliance”, saying that he believed that if Ukraine joined NATO in the future, which NATO committed to do at the 2008 summit in Romania, capital Bucharest, “the level of military threats to Russia will increase dramatically many times over.”

This map shows the regions of Ukraine that Russian President Vladimir Putin has designated as independent.

For many Ukrainians, recent talk in the West about fears of an imminent Russian invasion of their country is meaningless — from their point of view, it was taken over eight years ago by Putin’s annexation of Crimea and rebel uprisings in the Donbas. country – and the constant threat never vanished. In fact, more than 14,000 people have been killed in the conflict since 2014.

In late 2013, protests erupted in the Ukrainian capital Kiev after then-Ukrainian President Viktor Yanukovych halted moves to sign an association agreement between Ukraine and the European Union and instead forged closer ties with Russia.

The protests, known as Euromaidan, continued, prompting demands for Mr. Yanukovych’s resignation and calls for an end to widespread government corruption and human rights reform in Ukraine.

In February 2014, the government and the opposition signed an agreement on the settlement of the political crisis in Ukraine mediated by Russia and the European Union. Subsequently, Mr. Yanukovych fled the country, and the Ukrainian government held early elections the following May.

Two days after signing the agreement, Mr. Putin moved on to annexing Crimea, a peninsula in the northern Black Sea.

Troops entered the country and a controversial referendum was held that showed that 97 percent of the population wanted to be part of Russia.

Russia has drawn up an agreement on the accession of the region. The UN General Assembly immediately reacted by passing a resolution to invalidate the referendum, however this had no legal effect due to Russia’s veto in the UN Security Council.

Around the same time, support for a pro-European government was also considered lower in the eastern regions of Donetsk and Lugansk oblasts in Donbas than in central parts of Ukraine. Pro-Russian protests were held, the rebels claimed control and held referendums on the future of the regions, with these referendums not recognized internationally.

Meanwhile, the government of Ukraine, headed by Petro Poroshenko, was moving closer and closer to the West. The agreement between Ukraine and the EU has been ratified and Mr Poroshenko has set a target for Ukraine’s EU membership by 2020.

In January 2015, a ceasefire agreement was signed between Mr. Poroshenko and separatist rebels in Minsk, Belarus. As a result, the breakaway republics of Donetsk and Lugansk would receive a special status within Ukraine, although these steps were still being worked out.

However, by saying on Monday evening that he plans to recognize the independence of Donetsk and Lugansk, following televised requests from regional leaders, Putin violated the Munich peace deal. Thus, he is going to cause sanctions from the West, including the UK.

Subsequently, Russia sent troops into the two breakaway regions, claiming to be peacekeepers. However, international governments insist that they do not believe this is the case.

In addition, there is debate over whether recognizing regions would include more territory than currently occupied due to historical border changes, meaning that even the capture of breakaway regions could be seen as moving deeper into Ukrainian territory.

About 150,000 Russian troops are deployed around Ukraine’s borders, including in Belarus, a Russian ally, where the southern border runs close to the Ukrainian capital Kiev.

Western leaders have warned that they think Russia could mobilize troops not only in the eastern regions, but also in Belarus and Crimea, while US President Joe Biden said he thinks Kiev specifically could be targeted.