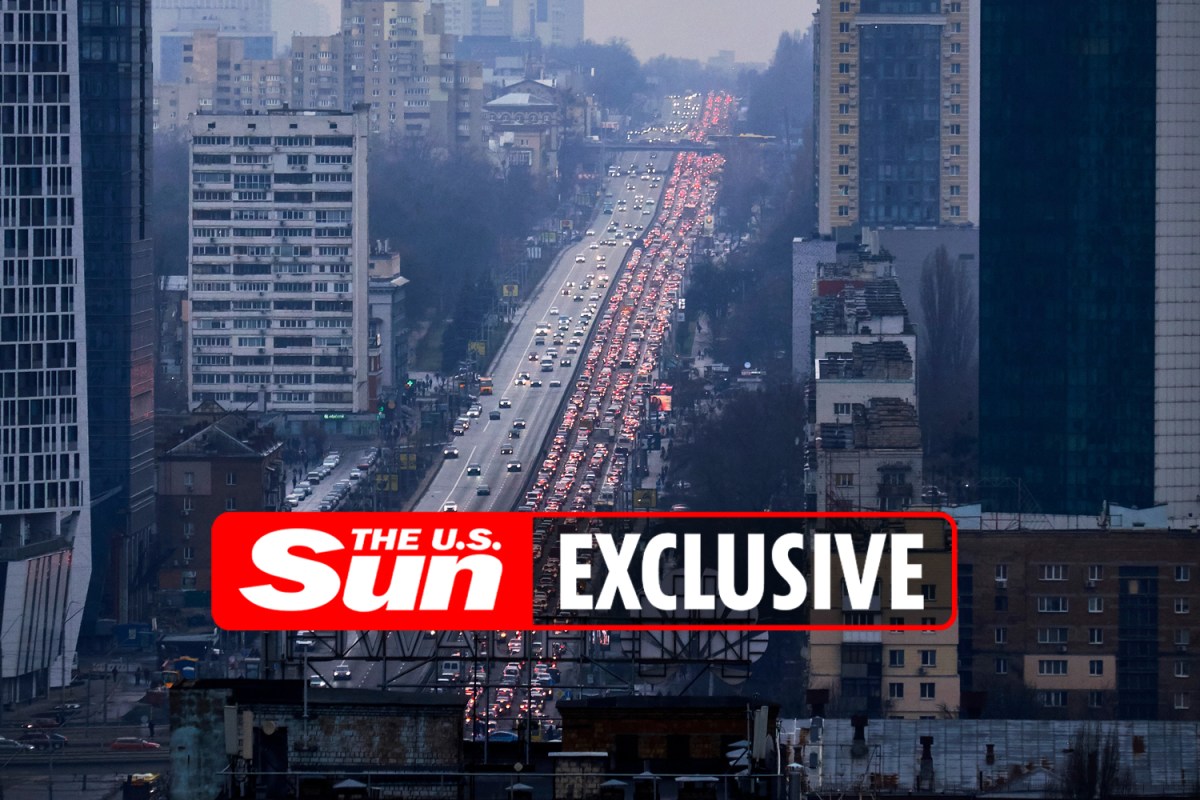 Up to a million frightened people yesterday prepared to flee from an exhausted Ukraine in a desperate rush to the Polish border.

The refugees included thousands of Britons who ignored earlier calls for evacuation.

There are fears that the last number to escape a full-blown Russian offensive could reach five million if deranged President Vladimir Putin continues to move west.

Residents of the capital Kiev were awakened by massive airstrikes, and by dawn, roads and trains heading more than 400 miles west to Poland were flooded.

Some 6,000 British citizens were in Ukraine when British Ambassador to the country Melinda Simmons urged them to evacuate for their own safety earlier this month.

But it is believed that most of them remained – in the mistaken belief that Putin would never order a full-scale attack.

Poland, an EU member that borders western Ukraine, was making plans yesterday to deal with a million refugees.

British magazine publisher Peter Dickinson, 45, who lives in Kiev with his wife Susanna, 39, and children Elizabeth, 14, and Nina, 11, was awakened by the explosions at 5 am.

The whole family, including Susanna’s Ukrainian parents, set off 15 minutes after the airstrike on the capital.

But those who remained faced fights at gas stations over rationed fuel and hours-long lines at ATMs as desperate families struggled to get cash before finding shelter. The main roads from the capital were blocked as many tried to head to Poland.

Buckinghamshire native Peter, who settled in Kiev after working for the British Council 20 years ago, told The Sun: “I had never heard bombs before, but they were loud enough to wake us up and I knew it was time to leave.

“After such a wake-up call, there was no way we were going to stay. We made some arrangements, packed and stocked up some fuel for the journey, and set off.”

Peter hurriedly packed his BMW before dawn and sped off with his family, followed by his relatives.

He added: “My girls are obviously very scared and keep asking us what is going on and why we have to leave Kiev so quickly.

“They don’t really understand that we are all victims of a tyrant who seems to have completely lost his mind and has absolutely no respect for human life.

“Vladimir Putin is the most dangerous person on the planet – this is Hitler’s madness – and my priority right now is to get my family as far away from his troops as possible.

“Many Britons like me stayed because they never believed it would happen, but Putin pushed the button. It’s disgusting”.

British Ambassador Ms Simmons and the bulk of the diplomatic staff moved 340 miles west last week to Lvov near the Polish border as intelligence warned of an attack.

But explosions were also reported on the outskirts of Lviv.

Edinburgh-born, head of a medical company, Stuart McKenzie, 51, organized a 200-strong expat-flagged march through Kiev in support of local residents after he defied advice to leave.

Vladimir Putin is the most dangerous man on the planet – this is Hitler’s madness – and my priority now is to get my family as far away from his troops as possible.

But yesterday, dad finally decided to run when bombs rained down on the whole country.

The father of three, Stuart, who is married to Lena, 49, a Ukrainian woman, said: “The situation became so serious that we decided to leave at 4:30 in the morning – and heard the first explosions of the war as we set off.

“I was awake and saw Putin’s speech – and we hit the road as soon as we heard it, because he is clearly planning something more than our worst fears.

“Fortunately, I had fuel canisters in the car, and in the end I packed my things and hit the road in exactly 15 minutes.

“Now we are close to the Polish border to the west of Kiev, but God knows what chaos awaits us there.

“Thousands of refugees are now heading west, and I dread to think what awaits us.

“But anything is better than Kiev at the mercy of Russian troops.”

Stewart also predicted chaos across Ukraine as garages ran out of fuel after being flooded by desperate people fighting to escape during an eight-hour drive to Poland.

He told The Sun: “We’ve passed the terrible lines of cars at gas stations, and it’s clear that supplies will soon run out and people here will be in the war zone.

Thousands of refugees are now heading west, and I dread to think what awaits us. But anything is better than Kiev being at the mercy of Russian troops.

“I still can’t believe this is actually happening.”

Business tycoon Richard Spinks, 55, from Kent, has lived in Ukraine for over 20 years and brought his two sons to join family in the UK two weeks ago.

But he returned to his home in Lvov to be with his wife Tatyana, 45. He said: “I don’t want to try to get to the Polish border and be targeted in a huge queue, but that’s what we have to do.”

Marine engineer David Martin, 59, who moved to Lviv from Cornwall six years ago and lives there with his Ukrainian wife, said: “Every bank has a line of 50 people on the street and some have no cash left.

“No one believed that Putin would do it. We thought he might be going to take over more of the Donetsk region, but he bombed Kiev, home to three million people, on the first day.”

David went to the British Embassy in Lviv yesterday to try to get a visa for his wife, but claims he was told they couldn’t help him.

He added: “We will have to go to Poland. I will not leave my partner. It’s not an option.”

Sean Cusick from Glasgow heard bombs falling near his home in Kharkov, close to the Russian border. He is currently stuck with his Ukrainian wife Chloe and his two-year-old stepson. He said, “I’m terrified.”

And Brit Martin, 65, who lives in the Black Sea city of Odessa with his wife and stepdaughter, said he was awakened by powerful explosions.

He said, “I felt the earth shake. We knew it was very serious.