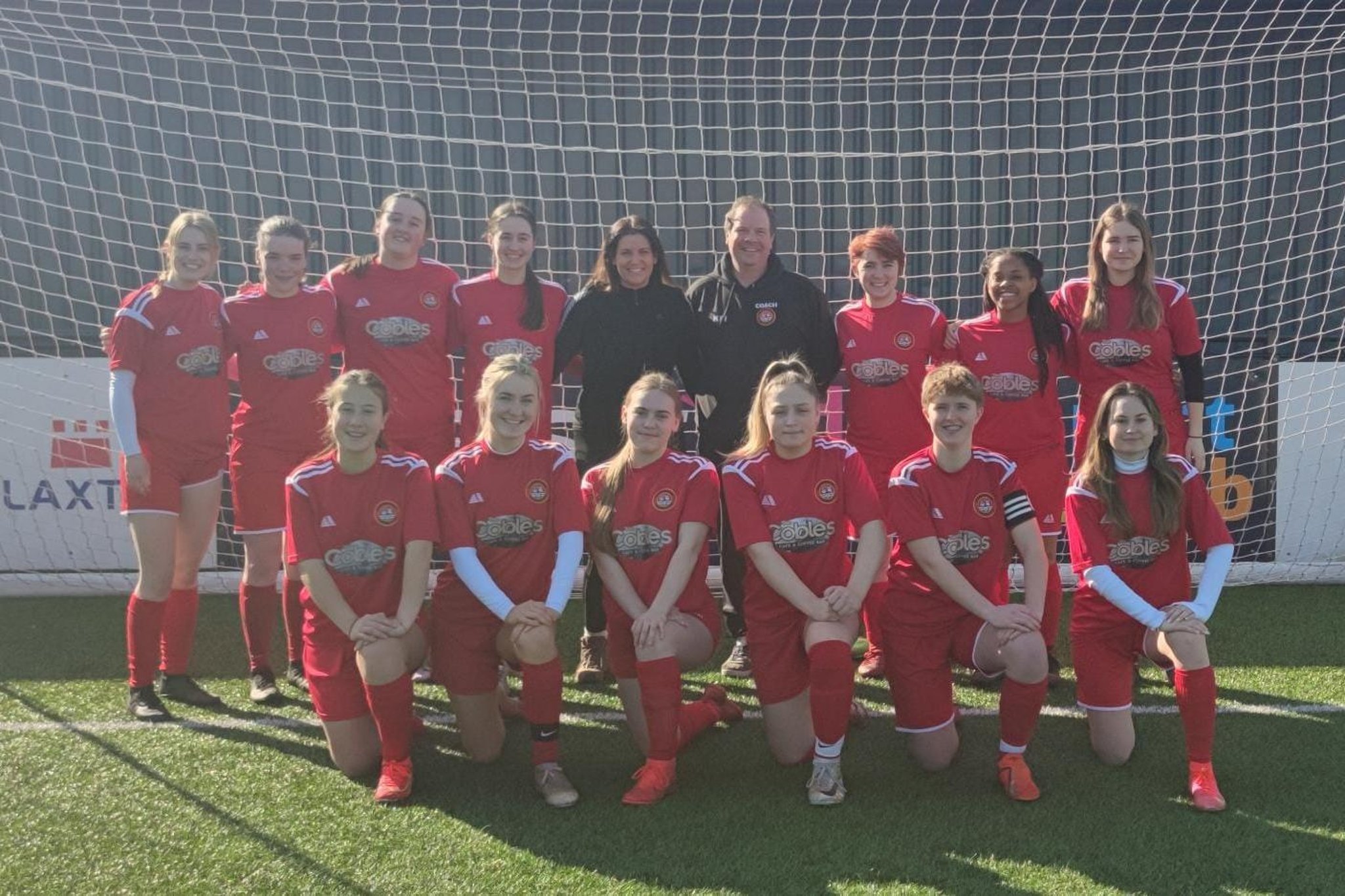 Boro looked focused and fit, with solid defense and great tracking from midfield when needed.

A clash of goals resulted in players from each side being eliminated 25 minutes into the game and the game remained at 1-0 until the whistle for half-time.

The second half continued to improve for Scarborough, with Lara Pussygood-Capilla scoring in the 50th minute and three minutes later Emma Willis made it 3-0.

Beth Barnes added two more goals, the first of which from 25 yards hit just long enough to slip under the crossbar.

Forward May Chaplin had great legs and put Wigginton’s backline to work with some great shots.

Four players who have played together for over 10 years on the Scarborough women’s team, from left to right: Alex Metcalfe, Jolie Matthews, Emma Willis and Poppy Simpson.

A great pass from Lauren Corner gave Willis the chance to get her second in the game.

Jolie Matthews put a lot of pressure on the goalkeeper and Wigginton defenders, constantly crossing the ball into the box, creating many chances.

Great performance by Patemann and Emily Wetzig allowed Amber Colling to make a long run on the wing and score the final goal of the game.

The 7-0 victory was a great end to the season, especially for those who will move forward to new things.

Scarborough, girls under 12 left with a 3-2 triumph after a long trip to Brighton Belles.

The Reds started strong, were close a few times, but it was a defensive mistake that conceded a weak goal, so Brighton went 1-0 at half-time.

After some good thinking at half-time, the girls hit it off with two fantastic goals against the impressive Chloe Boyes.

Pippa Wedge also got on the scoresheet with a brilliant play on the wing when Isla Jones crossed the wedges and finished.

Then another defensive mix-up saw the Reds concede an unnecessary goal, but Scarborough won 3-2.

The best player was Rachel Hodgson who was fantastic in central midfield, interrupting play and throwing fantastic balls.

Next in line is the away game against Shiptonthorpe.

Scarborough, girls under 13 made the trip to Fulford to play in the match for first place in the table.

And while Boro lost their first points of the campaign, they came away with a well deserved 1-1 draw to continue their title challenge.

Boro started the first half strongly and showed some of the best football of the season to push the hosts back, but the lack of play and a good goalkeeper kept the guests back.

Fulford took the lead and held on until half time after a controversial decision by the substitute referee.

Boro pressed again after the break and once again had to face some decisions that didn’t go in their favor, including giving up a good penalty, but Gracie McLaughlin equalized to keep them on course.

Scarborough, girls under 11 entertained Brooklyn last weekend and were in great shape.

Star of the match Sophie Overfield scored four goals for herself and the selection was a stunning long-range shot.

Always reliable Matilda Jordan chipped in with her double.

Alicia Leek scored one goal and captain Anya Joy managed to score a goal after a long break due to injury, making the final score 8-0.

Special mention deserves Martha Stockill, who was extremely composed from behind, removing any danger and showing exemplary skill and accuracy in passing the ball forward to her teammates.

Scarborough Women Under 15 ended their league with a convincing 3-0 home win over Poppleton.

The home team’s second goal came midway through the first half, when Libby Coggins raced for a great pass from midfielder Phoebe Philps.

Coggins broke past the visitors’ defenders and shot coolly into the bottom corner to make it 2-0 at half-time.

Boro’s defense held off Poppleton’s attack in the second half by constantly threatening to score again, and a third goal was added by striker Kelsey McCaw with an accurate shot from the edge of the penalty area to make the final score 3–0.

Fairbank was awarded Man of the Match for a brilliant performance.