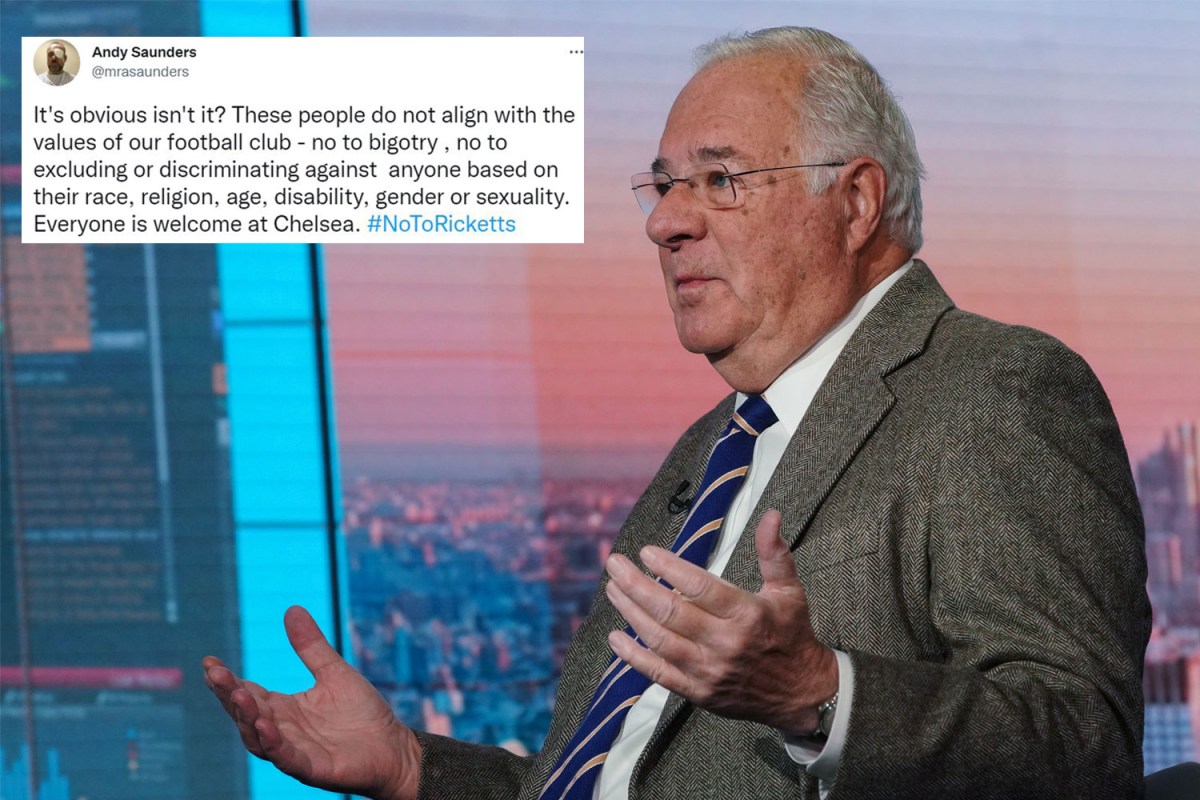 The Rickett family, hoping to buy Chelsea, have been forced to release a statement denying they are racists.

Chelsea fans reacted furiously to leaked emails from 2019 in which prospective new owner Joe Ricketts said: “Muslims are my enemies.”

As shown SplinterThe 80-year-old also wrote in 2019: “Christians and Jews can have mutual respect for each other to create a civil society.

“As you know, Islam cannot do that. Therefore, we can never allow Islam to become a significant part of our society.

“Muslims are naturally my (our) enemies because of their deep antagonism and prejudice against non-Muslims.”

And amid the backlash, the American family tried to reassure supporters with a brief comment.

They said, “Our family rejects in the strongest terms any form of hatred.

“Racism and Islamophobia have no place in our society.

“We have developed deep and strong partnerships with the Muslim community in Chicago, as well as with all communities of color.

“Respect for diversity and inclusion is central to our family values.

“If we win our bid for Chelsea, we commit ourselves to the club and the fans to actively promote these values.”

The Ricketts family, who also own the MLB Chicago Cubs franchise, applied to buy Chelsea before last Friday’s deadline.

Joe’s son, Tom, is leading the effort and is set to continue talks with the Chelsea Supporters’ Fund after already meeting Conservative MP for Chelsea and Fulham Greg Hands.

The Ricketts have been backed by £20bn US hedge fund manager Ken Griffin and are confident they will move on to the next step in the process.

But Chelsea fans are already campaigning against the Ricketts.

The hashtag #NoToRicketts went viral on Twitter as Blues and Cubs supporters rallied against them for their racist comments and the baseball team’s flight.

As part of a long open letter to everyone involved in the sale of his beloved club, the head of the Chelsea Fan Club in Chicago, Brian Wolff, who is also a Cubs fan, begged to reject Ricketts’ offer.

“I can report that the vast majority of opinions have been general disdain.

I urge you to reject their bid to own Chelsea.

“The Ricketts’ political donations, fundraising and support for candidates who do not share the inclusive vision of Chelsea Football Club and its supporters are completely inconsistent with the 19 years of fantastic work done by the club and the Chelsea Foundation, especially as a leader in a commitment to a living wage. and efforts to protect and promote equality for the BAME and LGBTQ+ communities.

“Their ownership of the Chicago Cubs baseball and the redevelopment of Wrigley Field raise serious doubts that they will build on the club’s success on the field, as well as the continued existence of the Chelsea field owners and the goal of keeping the football club alive.” Chelsea at Stamford Bridge. our eternal home.

“On behalf of countless fans around the world, I urge you to reject their bid to own Chelsea Football Club in favor of others who will commit themselves not only to developing the last two decades of investment in players and infrastructure, but just as importantly, investment in supporters and values ​​that we hold dear.”

He wrote: “So I have seen and heard enough. I support @ChelseaSTrust and say a big anti-racist NO to Ricketts’ bid!!

Elsewhere on Twitter, one said, “It’s obvious, isn’t it? These people do not share the values ​​of our football club – no bigotry, no exclusion or discrimination against anyone based on their race, religion, age, disability, gender or sexuality. Everyone is welcome at Chelsea.”

Another commented: “I love my club @ChelseaFC and it’s very important that the new owners respect not only the club but also the fans, the religion of the people, the color of the skin and that’s why I’m #NoToRicketts.”

And the last user shared a photo of the Muslim quartet Antonio Ruediger, Malang Sarr, N’Golo Kante and Hakim Ziyech, before adding: “You look at this beautiful photo and the first thing that comes to your mind is to say #NoToRicketts.”