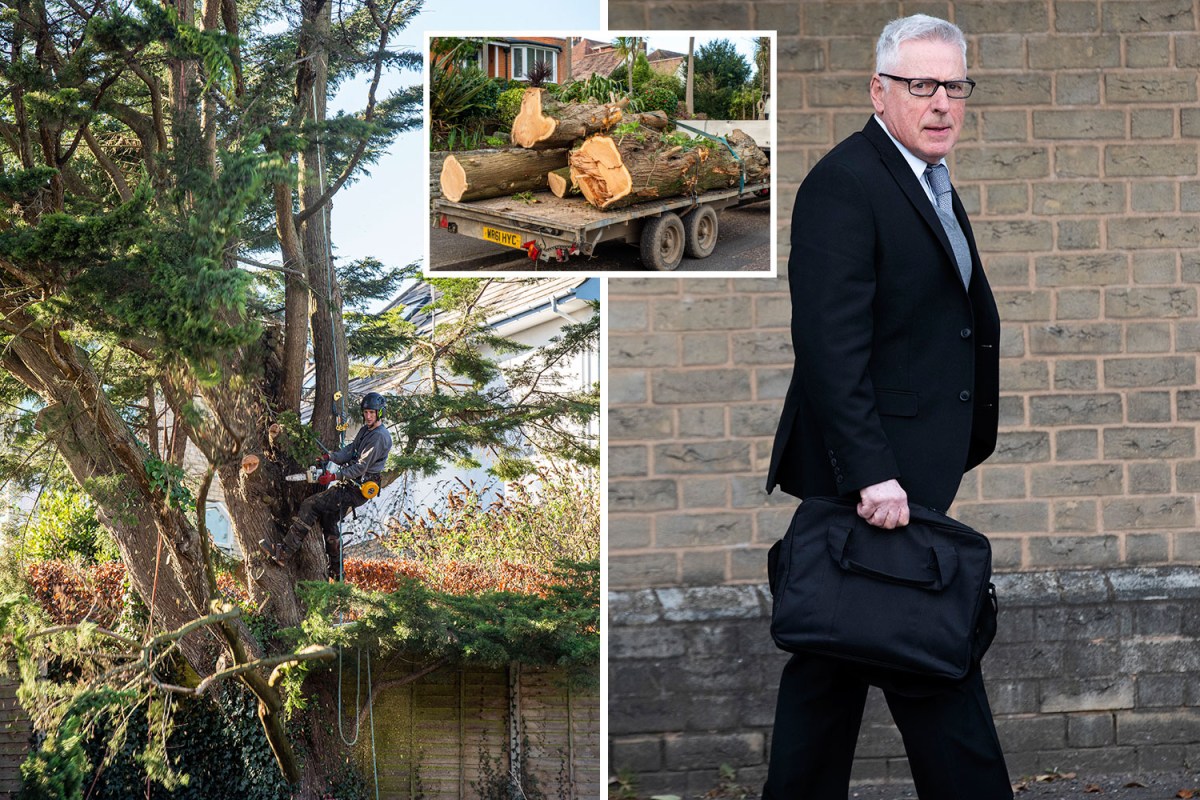 A MAN was fined £80,000 by the council for cutting down a protected tree, but officials were criticized as THEY also fired four other people.

Robert Page was fined a hefty fine after it was discovered that a 25m Monterey pine had been cut down in his garden.

The adult specimen is covered by a conservation order for the tree, and the council has named it a “historic” tree that is an “important feature of the local landscape.”

However, the same local authority has given permission for the removal of 60-year-old Monterey cypresses in the Canford Cliffs area of ​​Poole, Dorset.

The council was accused of hypocrisy for allowing four protected trees to be cut down, and Mr. Page was fined for the same act.

The council ordered the removal of the historic trees to make way for the construction of two new homes.

And despite neighbors’ appeals and objections, this week, workers cut down four trees with chainsaws.

It comes a week after a £1million home that was less than 25 years old was razed to the ground as part of the same development.

Peter Norrie, who lives across the street, said he was furious that the trees were cut down before the outcome of an appeal he filed with the local government ombudsman was resolved.

He said: “I had a complaint registered with the Ombudsman, which should have been considered.

“If an individual were to completely disregard due process and act before a decision is made, I’m sure the board would take him to court.

“With complete disregard for due process, they allowed four protected trees to be cut down.

“The council is responsible for protecting the TPO trees. They are supposed to set an example, not be an example.

“They are very quick to punish individuals, as evidenced by recent lawsuits, but at the same time they believe that these same rules do not apply.

“Of course, it’s like one rule for those who violate the OST laws, and a completely different set of rules for the council.

Neighbor Chris Cotterell added: “The trees were at least 60 years old and looked perfectly healthy, but were standing in the way of development.

“They are so strict about other homeowners who cut trees, but it seems to be a different law for local authorities.”

In an email to Mr Norrie, Nicholas Perrins, head of planning at Bournemouth Christchurch and Poole Council, said planning consent was more important than any complaints to the oversight body.

He said: “The building permit allows some of the TPO trees to be removed and as far as we understand the legislation, that is enough for the developer to proceed.

“I am aware that you have referred the matter to LGO and the appropriate process will now follow due process, but this is not a process that can stop the implementation of what we consider to be a legal and existing building permit.”

A council spokesman added: “We appreciate our resident’s concern and I can assure you that all necessary planning procedures have been followed to allow the removal of the four Monterey cypresses.

“The planning application for this site was approved in June 2021. In this process, a detailed environmental and ecological assessment has been taken into account, which allows the removal of trees.

“Therefore, there is no legal requirement for a developer to submit a separate application for tree conservation.

“As part of the approved application for this development, tree planting will be carried out throughout the area to provide future tree cover and landscaping.”

A spokesman for Charlew Developments, which is doing the work, said: “We have full approval for everything we do there. We don’t break any rules.

“The proposal is a high quality design with a contemporary style but with a traditional form that creates two striking detached homes.”

They added that the two properties will make a positive contribution to the building and the environment.