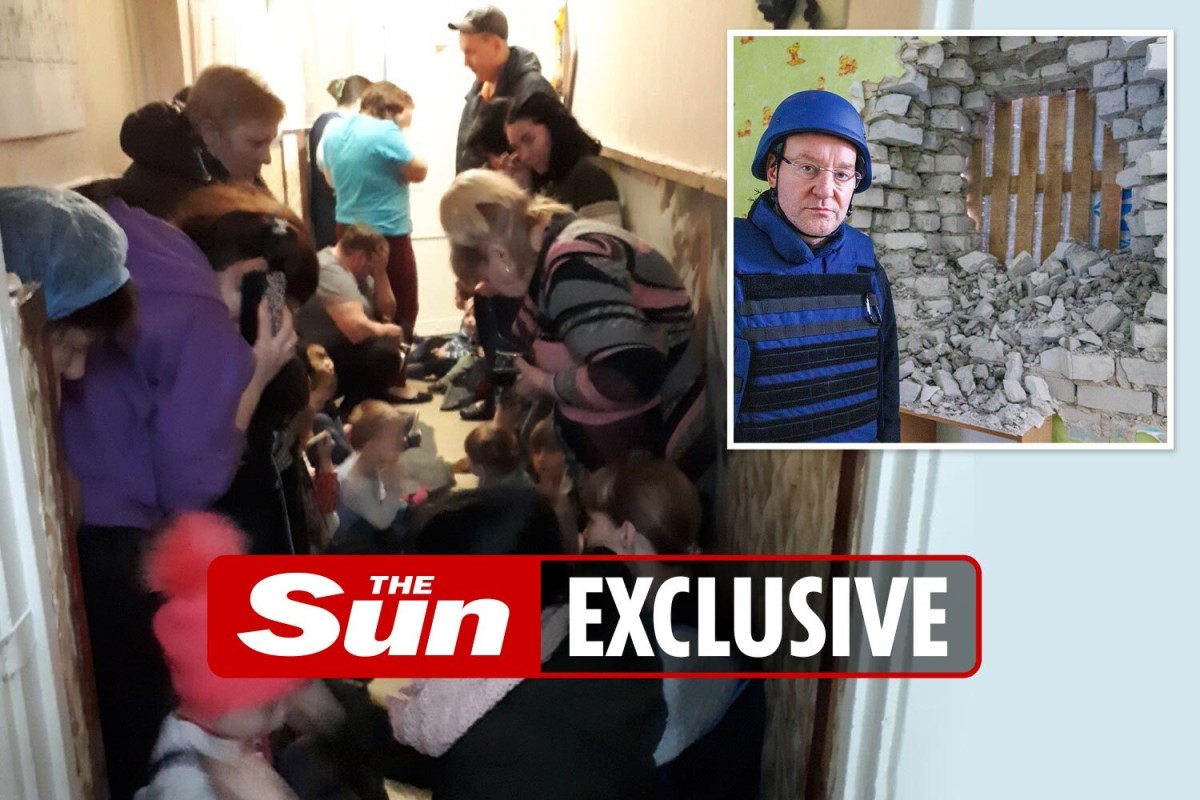 The rumble of an artillery shell pierced the air seconds after we stepped out of the armored personnel carrier only half a mile from the Ukrainian front line in the Donbass.

Then another…and another as the weary grandfather cycled to pick up his morning paper, apparently oblivious to the danger as helmeted soldiers gathered nearby.

That was yesterday in the conflict-torn Ukrainian city of Stanytsia Luhanska, where a “false flag” projectile fired by pro-Russian forces sparked outrage when it crashed into a kindergarten.

But three days later, we found that fear still roamed the streets – as warlords and locals had warned, the attacks were intensified in anticipation of the invasion.

A shell hole in the wall of the Skazka kindergarten was partially patched up here, but the damage to the shattered nerves of the children and staff remained.

“I don’t want to tell you what I think of these people.

“I will never forget the screams and tears of the children that day, and they are still traumatized.”

Yesterday, The Sun received the first photographs taken of frightened children hiding in a windowless hallway after an explosion in their gym’s playroom.

About 20 toddlers, aged between two and six, were having breakfast when the pro-Russian separatist rebels fired the projectile and would have been in the playroom had it exploded 15 minutes later.

Rebels loyal to Kremlin leader Vladimir Putin fired a shot and then accused Ukrainian forces of a heartless “false flag” attempt to stir up enough rage to spark a war.

Yesterday, a 30-year-old Ukrainian army Mi-8 helicopter flew over us 100 miles along the powder keg of the “line of contact” separating Ukrainian troops and Putin’s hordes.

The rachitic ship skimmed across the vast snow-covered wastes at a tactical altitude of only 200 feet above the ground as we were ferried to a landing site near the city.

It was impossible to make out sections of the 250-mile World War I-style trench network separating the enemies as we raced past.

But one could see the piercing gazes of the locals as they tried to lead normal lives amid this growing chaos, including a family far below, skating on a frozen pond.

Ukrainian Army Colonel Oleksandr Hein told The Sun: “The Russians are trying to say we are starting this war, but the opposite is true.

“We only shoot back when it’s necessary, if it’s necessary to save lives or suppress their fire, but they shoot recklessly at places like kindergartens and then blame us.

“The rate of fire since those kids were nearly killed has actually increased – I would say they fire 20 rounds for every return fire.

“There are cameras that are watching all this, and it is absolutely clear what is happening. They want war.”

Local citizens have endured the threat of pro-Russian aggression since the capture of a piece of Donbass in 2014 and know the hardships and horrors of war.

But those who had the courage to stay in this lost corner of the country yesterday maintained incredible stamina.

Unemployed engineer Vladimir – a 69-year-old grandfather we saw riding a bike for his newspaper – stopped to talk as another remote volley of artillery and mortar fire erupted.

He told us: “Every day we now wake up to the sound of Russian shelling – it’s like a morning hello.

“We have been living like this for many years, but every day it gets worse and I have nowhere to run, so I stay.

“I tell myself that the Russians will not come, that this will end. I still hope that this war will not happen.”

Two Ukrainian soldiers were killed and five wounded yesterday as artillery shells continued to rain down on forward positions.

A spokesman for the Ukrainian Defense Ministry said: “We are not planning any offensives, but we will not allow unpunished shelling of the positions of our troops and settlements.”