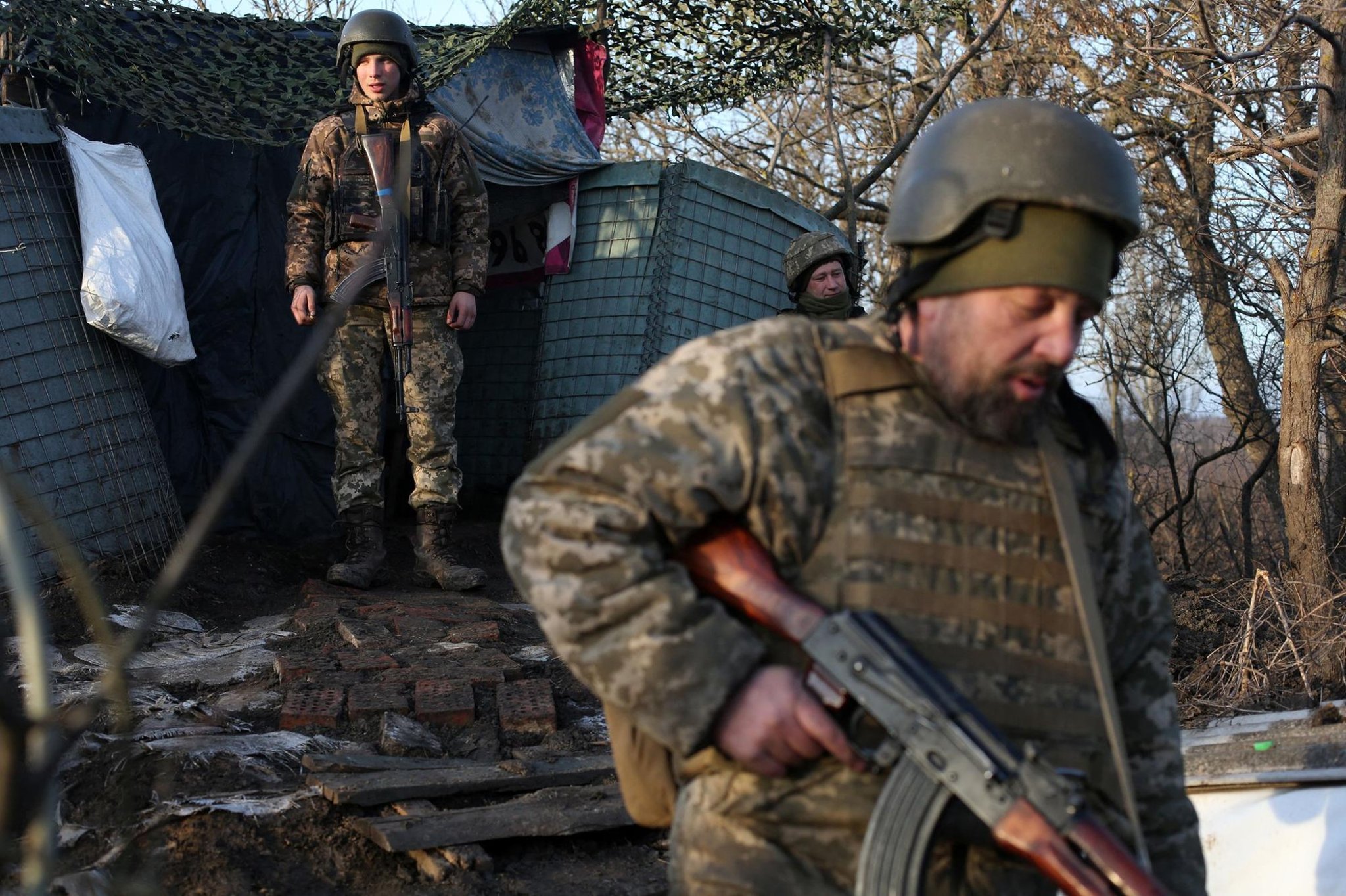 The prime minister said the phone call between French leader Emmanuel Macron and the Russian president suggested that Mr. Putin might be “ready to engage in finding a diplomatic solution” was “a good sign.”

Downing Street reported that the prime minister and Mr Macron agreed during discussions on Sunday that next week would be “crucial” in trying to prevent an invasion of Ukraine.

This comes after the White House said that US President Joe Biden “agrees in principle” to a meeting with Putin, as long as Russia refrains from any invasion plans.

Members of the Armed Forces of Ukraine go to the front line with pro-Russian separatists near Novognatovka, Donetsk region, February 20, 2022.

Ukraine is now surrounded on three sides by some 150,000 Russian soldiers, combat aircraft and equipment, with the West predicting that Moscow is ready to launch an offensive against Kiev — a battle that Johnson says will be “bloody and protracted.”

During a conversation between Macron and Putin at the Elysee Palace, it is said that the couple agreed to work towards a ceasefire in eastern Ukraine, where clashes between Ukrainian government forces and pro-Russian separatists have escalated.

The French and Russian foreign ministers will meet in Paris to propose a solution to the current tensions, while the two heads of state “made a firm commitment to take all useful actions to avoid escalation, reduce risks and keep the peace,” the statement said.

The prime minister, who said the conflict between Kiev and Moscow would lead to a war on a scale not seen since World War II, spoke to Macron after the French president spoke to Putin on Sunday.

Spokeswoman No. 10 said: “The prime minister noted that President Putin’s commitment to President Macron is a welcome sign that he may still be willing to engage in finding a diplomatic solution.”

The leaders “stressed the need for President Putin to drop his current threats and withdraw troops from the border with Ukraine,” Downing Street added.

Before the call, the Conservative Party leader acknowledged that a joint US-British threat of sanctions aimed at preventing Russian state-owned firms from trading in pounds and dollars in the event of an invasion is a move he predicted would hit the Kremlin “very hard.” – may be “not enough by itself” to prevent conflict.

White House press secretary Jen Psaki said in a statement that the US is “committed to diplomacy until the moment the invasion begins,” adding that US Secretary of State Anthony Blinken and Russian Foreign Minister Sergei Lavrov were to meet in Europe later. This week.

She said: “President Biden has agreed in principle to meet with President Putin after this meeting … as long as there is no invasion.

“We are always ready for diplomacy. We are also prepared for quick and harsh consequences if Russia chooses war instead.”

Western fears of an invasion intensified after Russia and Belarus expanded joint military exercises beyond the original intention to end them on Sunday.

There are fears that these displays are another sign that Russia, which also conducts naval exercises off the Black Sea coast, is preparing to attack.

According to the business minister, there are 7,000 more Russian troops on the border with Ukraine than a few days ago.

Paul Scully told Sky News the number has been increased “despite the Russians trying to signal that they are moving away from the border.”

He warned that “death will be terrible” if Russian President Vladimir Putin does not engage in diplomacy.

Shelling intensified over the weekend in rebel-held areas of eastern Ukraine, with the prime minister suggesting the action was part of a Russian invasion plan.

Hundreds of artillery shells exploded along the line of contact between the two sides in the Donetsk and Lugansk regions, and thousands of people were evacuated to Russia. Some commentators believe that this is an attempt by Moscow to present Kiev as an aggressor.

There are fears that Russia, which also conducted nuclear exercises over the weekend, could use rising tensions as an excuse to attack.

The prime minister said British intelligence had suggested the surge in fighting had “every indication” that Putin’s plan of attack had “in a sense already begun,” Johnson told the BBC.