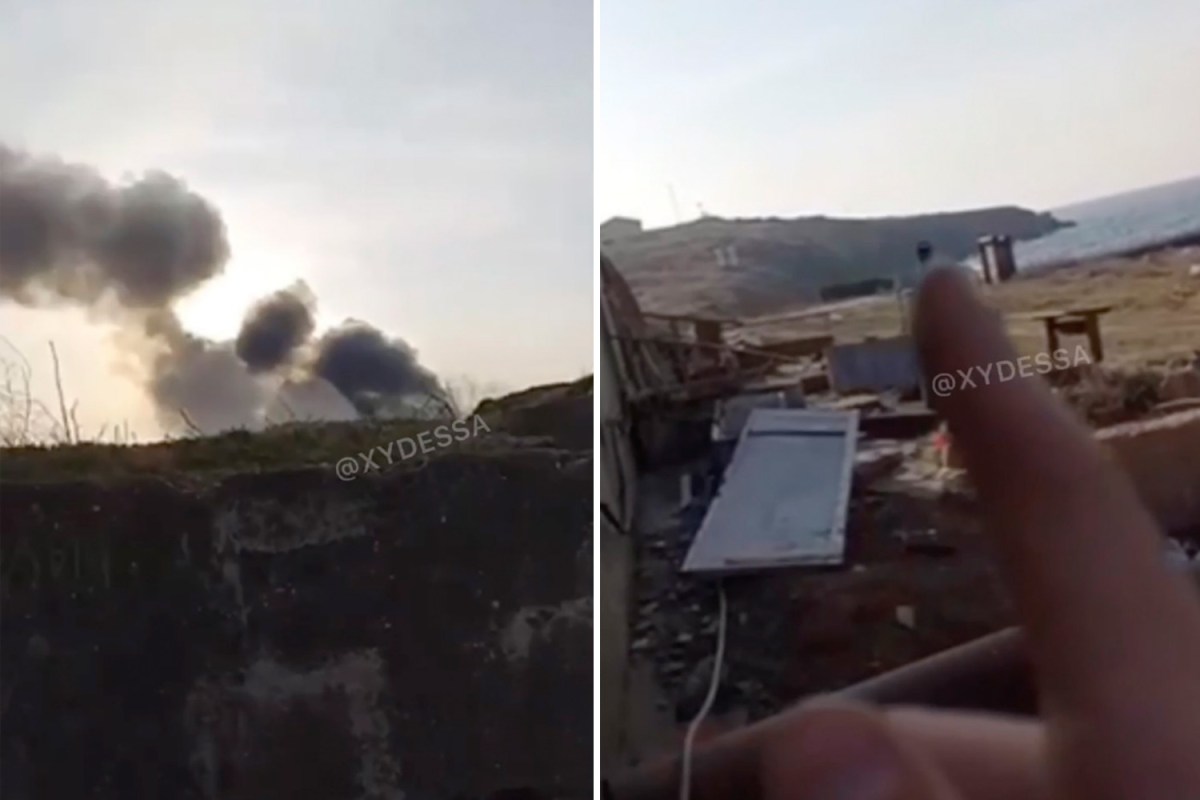 THIRTEEN Ukrainian soldiers courageously ordered the Russian warship to “fuck you” before they were brutally murdered after refusing to surrender.

The brash border guards have been tasked with defending Snake Island in the Black Sea from Russian invaders after Moscow launched a full-scale invasion of Ukraine.

When the troops faced an ultimatum from the Russians to surrender and give up the strategic island, the guards fearlessly told them to “back off”.

In a radio message from the ship, Russian soldiers warned the guards: “This is a Russian warship.

“I suggest that you lay down your arms and surrender to avoid bloodshed and unnecessary casualties. Otherwise, you will be bombed.”

But the Ukrainian troops defiantly refused to give up the territory and replied: “Go f*ck!”

The Russians were reported to have cursed back at the Ukrainians before all 13 border guards were killed in an aerial bombardment.

The chilling video showed the last moments of the soldiers’ lives before they were killed by a hail of missiles from a Russian warship.

You can hear the guard saying: “They are trying to scare us, or what? So far, nothing has been destroyed.

“I can’t understand what they are doing, most likely they are trying to scare us. They hit the rocks.”

It is reported that Ukrainian President Volodymyr Zelensky later acknowledged the death.

Serpent Island is under Ukrainian rule but is only a few miles off the coast of Romania.

The tiny island is of strategic importance as it will allow Russia to claim territorial waters that extend 12 nautical miles out to sea.

Russia would be able to cut off key shipping channels, isolating Ukraine from international markets and depriving its economy of trade revenues.

The Ukrainians were warned that they were now facing “the most difficult day” with the expected all-out Russian offensive.

At least 137 Ukrainians have already died across the country at the hands of Putin’s forces after the assault began at 3:30 am on Thursday.

But the Ukrainians remained defiant and put up strong resistance to the Russian invaders.

About 10,000 weapons were distributed to residents, and a general mobilization was announced to defend Kiev.

Dawn over the city, which faces an uncertain future, comes under Russian attack from the air, land and sea.

American intelligence now fears that Putin could topple Kiev in as little as 96 hours, as Russian troops moved only 20 miles after capturing nearby Chernobyl.

Ukraine faces another day of bloodshed – now all eyes are on the capital to see if Putin can break through.

It is believed that Russia wants to take control of the city and install a compliant puppet regime.

After another night of fighting across the country, the Ukrainian Interior Ministry announced that a Russian plane had been shot down over Kiev.

It is reported that he crashed into a residential building and set it on fire.

“According to operational information, the enemy plane was shot down by the Armed Forces of Ukraine and crashed in the Darnytsia region,” adviser Anton Gerashchenko said.

He also shared on his Telegram account a series of photos of a burning nine-story building.

“The attacks on Kiev with cruise or ballistic missiles are just continuing,” he wrote.

President Volodymyr Zelensky has urged world leaders to impose additional sanctions on Russia and provide defense assistance to the West.

He said: “If you don’t help us now, if you don’t provide powerful assistance to Ukraine, tomorrow the war will knock on your door.”

The Russian invasion began early Thursday morning with massive rocket attacks on cities and military bases before troops arrived from three sides of the country.

Ukrainian officials have said they have lost control of the Chernobyl nuclear power plant, and civilians across the country have rushed into trains and cars to flee.

Defense Secretary Ben Wallace said Vladimir Putin had been “prepared” for over a year to invade Ukraine.

He told Sky News: “Putin has been set on this for many, many months, definitely over a year.”

Mr. Wallace said the West’s diplomatic efforts didn’t seem to “make a difference” as Putin’s plan has always been one of “greed” and a desire to “seize the land.”

He said he believed the Russian leader, like Hitler, had an invasion plan all along, and the talks were “a straw game to buy time.”