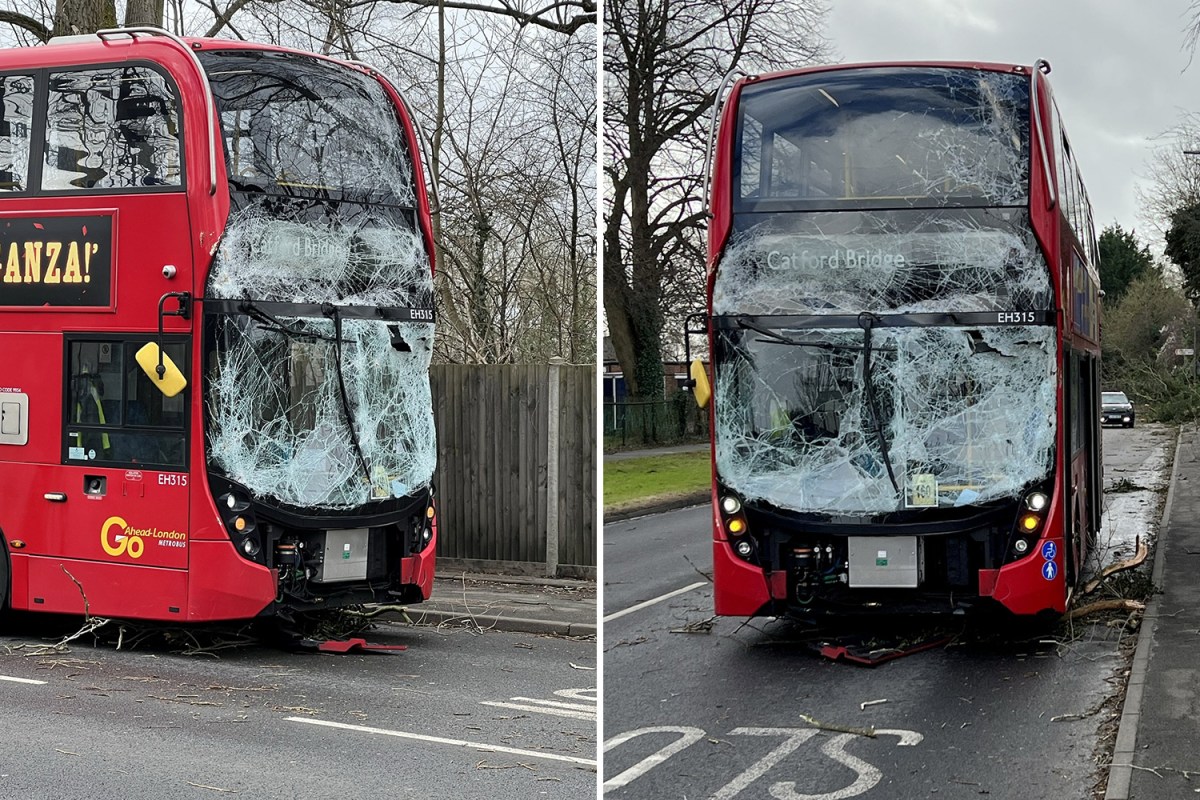 THIS is the terrifying moment when a tree crashed into a London bus in Storm Eunice’s killer winds of 122 mph.

Shocking dashcam footage captured the dramatic moment as a tree fell right into the road of a bus en route to Catford Bridge in Biggin Hill, Bromley.

The bus was caught on video as it drove around a curve past a row of tall trees in treacherous conditions.

One of the uplifting trees suddenly fell in the path of oncoming vehicles.

The footage shows the bus crashing into a falling tree, the branches of which break the windshield.

An explosion of debris was scattered across the road and oncoming vehicles as a huge tree crashed to the ground.

No serious injuries are known to have been reported since the shocking crash.

Four people have died after Storm Eunice hit the British Isles in a megastorm yesterday.

The treacherous conditions have led to travel chaos, flight cancellations, power outages and a flood of police calls.

A woman in her 30s died after a tree fell on a car in Muswell Hill, north London, on Friday afternoon – the first confirmed death in England linked to Eunice.

A man in his 50s died in Netherton, Merseyside, after debris hit the windshield of the car he was traveling in.

Another man in his 20s was killed in Alton, Hampshire, after a Mercedes-Benz Sprinter pickup truck crashed into a tree on Old Odyham Road just before noon.

A tree believed to be at least 10 feet tall fell on a predominantly residential street with speed bumps and a 30 mph speed limit.

Emergency workers in bloody clothes tried to save the victim.

And in County Wexford, Ireland, a man was killed by a fallen tree while working with a colleague.

A council spokesman said: “It is with deep regret and sadness that Wexford County Council confirms that one of our employees was fatally injured today in a workplace accident.

“The accident occurred while an employee was driving to the site of a fallen tree in the North Wexford area.

“The employee’s family, An Garda Siochana and the Health and Safety Authority have been informed.

“Our thoughts and prayers are with the employee’s family, work colleagues and friends during this very difficult time.”

Police confirmed that the man was pronounced dead at the scene and an autopsy will be performed in due course.

And a truck driver escaped serious injury after his truck was hit by wind on the M40 near Bicester in Oxfordshire.

According to the Met Office, the gale is said to be the strongest wind ever recorded in England.

The London Fire Brigade announced a serious incident after a surge of 999 calls, of which 550 were registered between 10:30 am and 1:00 pm, more than the usual 24-hour average.

And the Met Office warned that a new wave of strong winds and snowy conditions “could hamper recovery efforts from Storm Eunice.”

Travel disruptions will continue throughout the day as cleanup begins after the deadly storm.