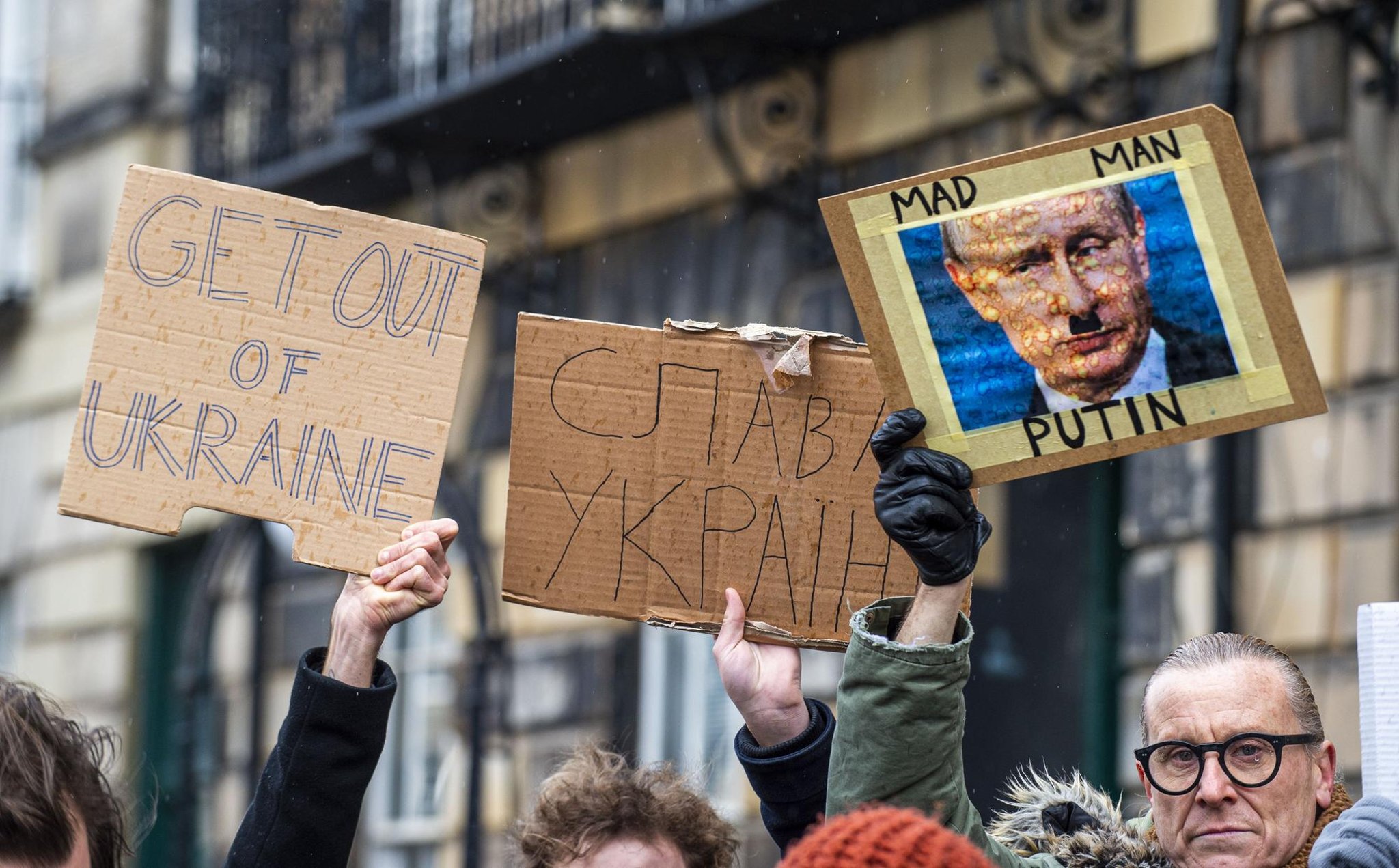 Protesters began gathering as early as noon on Thursday outside the consulate on Melville Street with flags and banners, expressing their support for the Ukrainian people and demanding that President Putin withdraw his troops.

Some did not have a personal connection to the country or its people, they simply chose to come because they felt the need, while others feared for the lives of their family and friends.

Ruslana, a 22-year-old Ukrainian student, told the Evening News that her entire family lives in Ukraine — less than 60 miles from the Russian border — and while they are worried, they are not afraid.

University of Glasgow student: “Many Ukrainians knew an invasion was coming, especially after Putin’s speech on Monday, which was full of hateful rhetoric towards Ukrainians, everything we love, our culture and our country, which he claims , does not exist”.

Directing her comments to Putin and the Russian government, Ruslana said: “You will lose. Someone very, very hated, like you lost in 1945 and will lose again. We know that the Ukrainians are very strong and we have the support of the whole world.

“I urge the whole world not to sit back, not to leave Ukraine, to be with us.”

Another protester, Mazhan Poikhily, a native of Kiev, called the attack a “horror movie.”

The 28-year-old man said: “I was watching CNN live and he [Putin] I was just finishing my speech about the beginning of the military operation. But then I go on Facebook and I see an explosion here, an explosion there.

“I watched all night as my country was being bombed. I watched it live. And it was a horror movie. And I don’t want to watch this horror movie.”

With his family in the country’s capital, Mr. Poyhyly said that he is constantly in touch and worried about how they are doing and how the situation is developing.

He continued: “I’ve been talking to my friends in Kiev in chats, Facebook chats, sometimes live, and we just read the news together, get scared and support each other.

“It’s just a very scary time. I think a lot of people from Ukraine abroad see this happening, but they just can’t do anything, and it’s very frustrating.”

Mikhail Vorobets, a demonstrator protesting on behalf of his father and all other Ukrainians, said that if he were alive today, his father would cry over what is happening to his beautiful country.

On Thursday, about 40 demonstrators protested outside the Russian consulate as Putin continues his invasion of Ukraine. (Picture of Lisa Ferguson)

“Ukrainians are very emotional,” he said.

“My father would cry that his homeland was invaded by thugs. I just pray that the modern Russian people will rise up, because the man [Putin] obviously insane and he has some kind of vendetta against Ukraine, I don’t understand.”

Mr. Vorobets added that he hoped that in the coming days more people would come together and come to institutions like the Russian consulate like they did today, because “to express support is all we can do at the moment.”

A couple of demonstrators are holding a banner reading “Get out of Ukraine”. (Image credit: Lisa Ferguson)