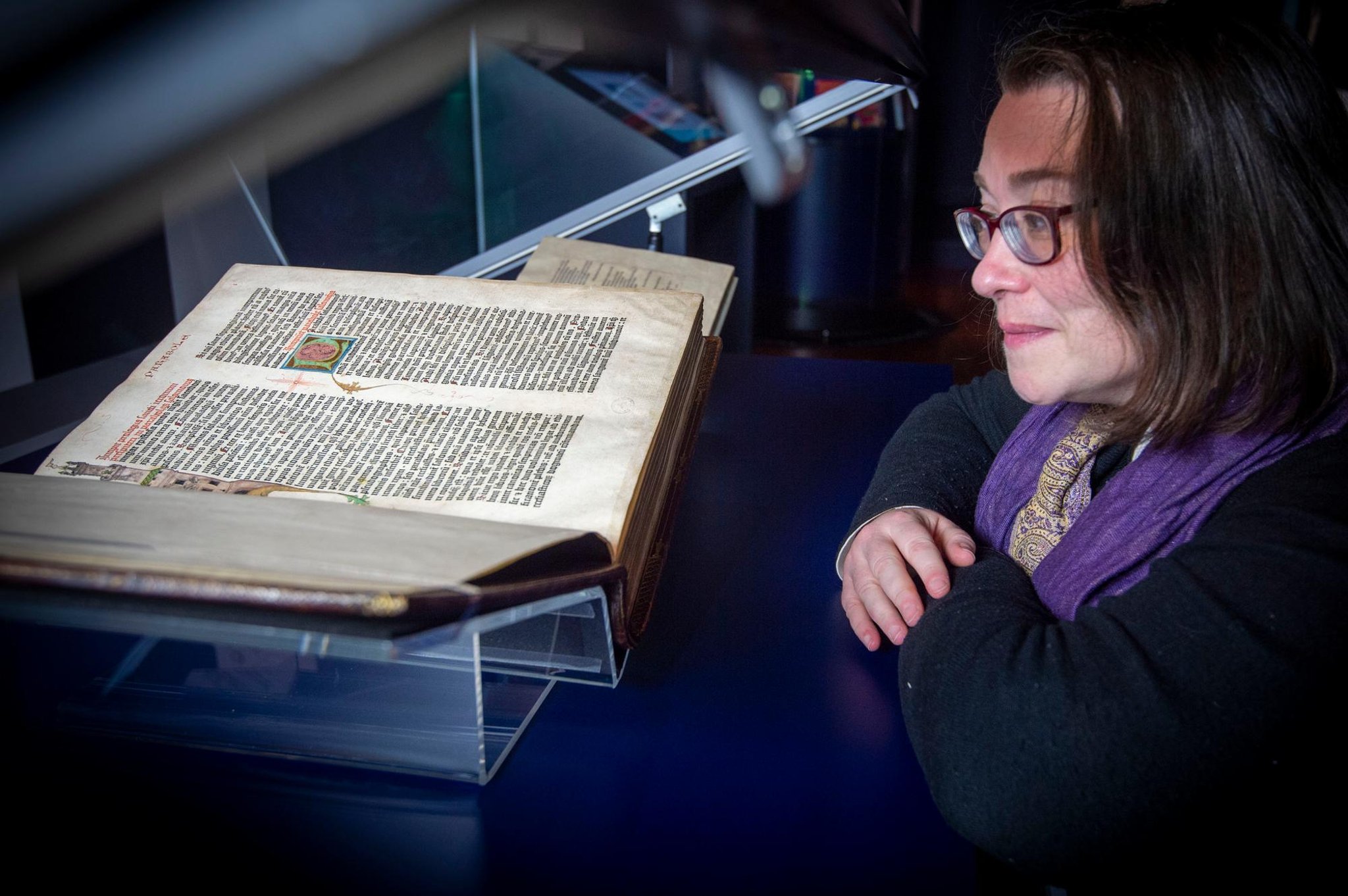 Head of Rare Books Helen Vincent with a copy of the National Library’s Gutenberg Bible to be displayed in the new Treasure Gallery. Picture: Neil Hannah

The pioneering contributions of violinist and composer James Scott Skinner, publisher George Thomson and researcher Isobel Wylie Hutchison are explored in the dedicated new Treasure Gallery at the National Library of Scotland in Edinburgh.

Visitors will be able to see one of the oldest surviving books published in Scotland over 500 years ago, a Gaelic manuscript dating from the 15th century, and some of the earliest color films made in Scotland showing walks in the hills in the 1930s.

The new gallery “Treasures” for the first time collected rare books, maps, documents, photographs and films that were rarely put on public display before. It was scheduled to open in the summer of 2020, but this was delayed due to the Covid pandemic.

It opens to the public on Friday and contains a letter from Robert Burns containing the lyrics to his most popular love song, Ae Fond Kiss, a copy of the first edition of Charles Darwin’s On the Origin of Species, and a letter to his Scottish publisher. , an account of the Battle of Culloden, pieces of clothing said to have belonged to Pretty Prince Charlie and Flora MacDonald.

Some of the rarest books in the National Library’s collections are on permanent display for the first time, including one of the 49 surviving copies of the Gutenberg Bible, the first book printed in Europe in movable type in the 1440s, and some of the few surviving books by early publishers Scotland by Walter Chapman and Andrew Maillar, who in 1508 opened a printing press at Cowgate in Edinburgh.

Dora Petherbridge, curator of international collections at the National Library, said: “We are thrilled to be able to open this space as it has allowed us to draw from our shelving treasures from all of our collections that we have wanted to be able to show to the public for many years.

The Treasures exhibition at the National Library is dedicated to the origins of the famous love song “Ae Fond Kiss”, the words of which Robert Burns wrote in a letter to Agnes MacLehose in 1791.

“We have books, manuscripts, maps, early sound recordings, early films, and modern materials that we have accumulated over the years and kept forever. Now we can finally show them to the public in a permanent gallery space.

“We were pretty spoiled for choice as we have over 30 million items in our collection, but the exhibition has a variety of themes including travel and literature.

“The thing that all of this has in common is that we reflect the memory of Scotland and the memory of the nation. We’re telling an international story, but everything on display has to do with Scotland.”

The exhibition recalls the extensive travels of the explorer and botanist Hutchison, who was honored by the Royal Scottish Geographical Society for her outstanding contribution to geographical knowledge, through Greenland, the north coast of Alaska and Arctic Canada in the 19th century.

It also contains one of the many letters Beethoven exchanged with Thomson, an Edinburgh publisher, who asked him to write musical scores for Scottish songs.

Among the episodes of Scottish history revisited through archival memorabilia are the 1997 devolution referendum and the subsequent election campaign for the reopened Scottish Parliament two years later.

One of the oldest exhibits is the Jonah Psalter, an adorned bound volume believed to date from 1180 and made for Betok ingen Somairle, Jonah’s first abbess.

Ms Petherbridge added: “I think it will be very interesting for people to see things like the Jonah Psalter, one of the earliest woman-related manuscripts in our collection, and a very early map of Glasgow and the River Clyde, which is extraordinarily exquisite and detailed. .

“We have 30 different translations of J.K. Rowling’s Harry Potter and the Philosopher’s Stone, which show the impact of the book on children’s publishing and literary history.

“We have so many treasures to share that some exhibits will change every year or so so people can always see something new and come back to the gallery.

Amina Shah, National Librarian of Scotland and Executive Director of the National Library, said: “As the custodian of the nation’s published and recorded memory, we have an unparalleled collection of materials.

“The Treasures exhibition gives visitors a glimpse into the vast collections, many of which are usually kept on several floors right under their feet.

“We are delighted to launch this long-awaited exhibition that will provide visitors with a unique insight into Scotland’s history and place in the world.”

The Gutenberg Bible was the first book in Europe to be printed in movable type in the 1440s.
The new Treasures Gallery opens at the National Library of Scotland on Friday.