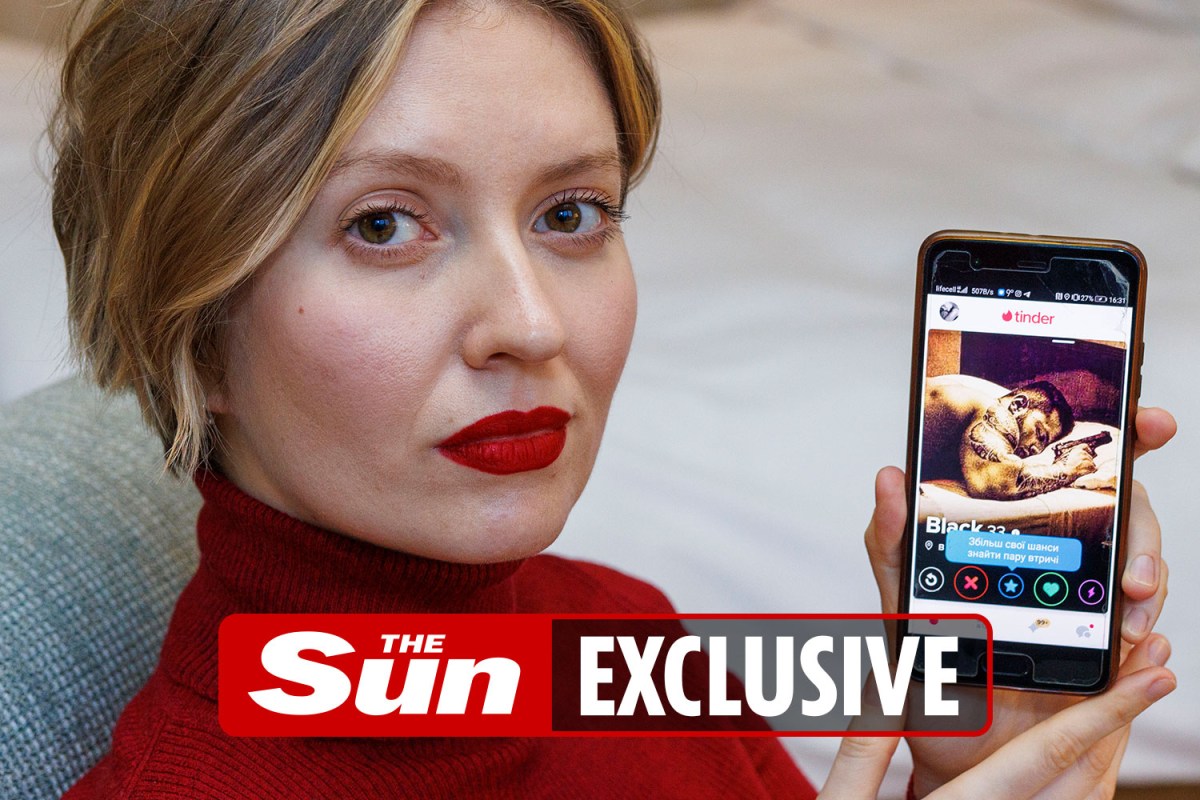 Ukrainian women in the second city of Kharkiv — just 20 miles from the vast invasion force of the tyrant Vladimir Putin — were stunned by a volley of uniformed suitors.

And they were certain they would receive a missile from Red Army commanders last night after giving away their position and posting pictures of their uniforms in flirtatious messages.

Dasha Sinelnikova’s phone was lit up with pictures of dozens of lustful Russians when she posted her location in Kharkiv on Tinder yesterday.

It is believed that the soldiers came within reach after the command of the Russian President ordered a large stream of tanks and troops to be sent within reach of the city.

Video producer Dasha, 33, told The Sun last night: “I actually live in Kiev but changed my location settings to Kharkiv after a friend told me that Russian troops are everywhere on Tinder.

“And I couldn’t believe my eyes as they popped out trying to look cool and tough.

“One muscular guy posed trying to look sexy in bed while posing with a gun.

“One was in full Russian outfit, while the others simply showed off in tight striped vests.

“I didn’t find any of them attractive and would never consider sleeping with an enemy.

“I automatically swiped left to dismiss them, but there were so many that I got curious and started messaging.

“It was funny, but at the same time scary to know that they were so close.”

Dasha exchanged messages with Andrei, 31, who posed with a Kalashnikov in full combat gear and a helmet.

Here’s how it was:

Dasha: Where are you? Are you in Kharkov?

Andrey: “I would love to come, but Russian guys have not been welcomed in Ukraine since 2014” [when pro Russian forces seized Donbas and annexed Crimea].

Dasha: “What are you doing?”

Andrei: “I was born in Belgorod, until 2014 I worked as an engineer, I visited Kharkiv quite a lot, and I liked it there so much that I wanted to buy an apartment. I love traveling around Asia, especially Thailand. But now is a difficult time. I wanted to go to Europe, but getting a visa is difficult because no one likes Russia now.”

When Dasha directly asked if Andrey was a Russian soldier, he responded with a cheeky “gif” with Hollywood star Jim Carrey, as if to say: “Oh!”

Within an hour, Dashin’s Tinder trawl found a steady stream of fans from Russia, all among Putin’s forces concentrated north of Kharkov.

Ukrainian military intelligence said last night that the sheer number of troops indicated that the city would be attacked in the coming hours.

Among the soldiers looking for love were a bearded “Cherny” – a 33-year-old Chechen fighter who posted a picture of himself in bed with a gun in his hand – and another hugging a kitten.

Alexander, 29, posed in a beret with sunglasses tucked into a tight blue and white striped vest.

Gregory, 25, in uniform, looked like he wanted to show off his military watch once again.

Another Russian was Alexander, 31, a possible Russian spy. He testified that he worked for the “Ministry of Internal Affairs of the Russian Federation”.

Dasha said: “These guys are just like everyone else on Tinder – they want love or communication.

“Therefore, it is quite difficult to imagine that they can come here to attack us. I hope this doesn’t happen.”

It became known that Russian units were ordered to turn off their mobile phones in preparation for the invasion.

It is reported that the advanced units of the 1st and 2nd Army Corps received orders.