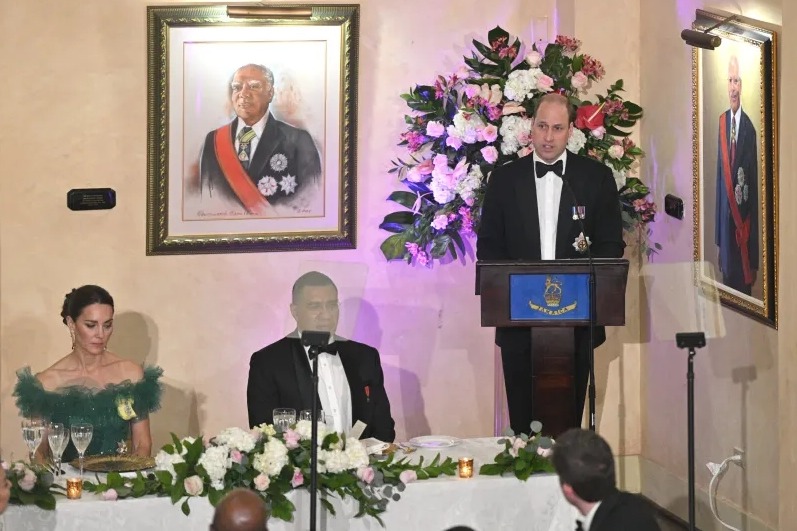 PRINCE William spoke of his “deep sadness” over the “disgusting” issue of slavery during a landmark speech in Jamaica.

The Duke of Cambridge, 39, has reached out to politicians amid ongoing unrest across the country over demands for the royal family to apologize and pay billions of pounds in damages.

He told guests at a black tie banquet that “this should never have happened” before echoing the words of his father Prince Charles.

The Duke echoed the words of the Prince of Wales during his speech, who four months ago called the slave trade “a stain on our history” when neighboring Caribbean Barbados declared itself a republic.

William also welcomed the “spirit” of the Windrush generation, who came from Jamaica and settled in post-war Britain.

There are allegations that Jamaican Prime Minister Andrew Holness will continue the process of toppling the Queen as head of state after the current royal visit.

Last night, William said: “Anniversaries are also something to think about, especially this week as the International Day of Remembrance for the Victims of Slavery and the Transatlantic Slave Trade.

“I fully agree with my father, the Prince of Wales, who said in Barbados last year that the horrific atrocities of slavery will forever stain our history.

“I want to express my deep sorrow. Slavery was disgusting. And this should never have happened.

“Despite deep pain, Jamaica continues to build its future with determination, courage and resilience,” he continued.

“The strength and common sense of purpose of the Jamaican people, represented in your flag and motto, celebrates the invincible spirit.

“It was the same spirit that spurred the Windrush generation to come to the UK to help rebuild after the Second World War.

“We are always grateful for the tremendous contribution this generation and their descendants have made to British life, which continues to enrich and improve our society.”

The words came amid growing opposition to the royal family in the Caribbean and a series of organized protests.

The Duke signed with Bob Marley’s infamous “One Love” lyrics.

Kate and William were previously photographed together on the stairs in a replica of the Queen and Duke of Edinburgh’s 1953 visit.

In his speech, he praised the Queen, saying: “Her dedication, determination and sense of duty to the Commonwealth family are deeply admired.

“She may be my real grandmother, but everyone considers her their grandmother too. And I don’t mind!”

The Duke also acknowledged the “tremendous change” in Jamaica and the Prime Minister’s condemnation, along with the UK, of Putin’s invasion of Ukraine.

He added: “There has been tremendous change in Jamaica over the decades.

“But what hasn’t changed is the undeniable Jamaican faith in supporting democracy and cooperating with other countries in support of peace, security and international law.

“Prime Minister, your strong statement condemning the invasion of Ukraine is proof of that.”

She may be my real grandmother, but everyone considers her their grandmother too. And I’m fine with that!

Kate and Wills are currently in Jamaica celebrating the Queen’s Platinum Jubilee and 60 years of Jamaican independence.

The Duke’s momentous speech comes after the Cambridge family was forced to call off their first engagement in Belize over a dispute over indigenous rights.

They were supposed to start their Caribbean tour with a trip to a cocoa farm on Sunday.

But residents of the small village of Indian Creek staged a protest against the trip, calling it “colonialism” and a “slap in the face.”

The villagers were reportedly particularly outraged that the Cambridges were allowed to land their helicopter on the village’s soccer field without permission.

He said: “The horrendous atrocities of the slave trade and the unimaginable suffering it caused have left an indelible mark on the history of our world.”

He then acknowledged that slavery was a “black stain” on Britain when he congratulated Barbados on proclaiming a republic in December.