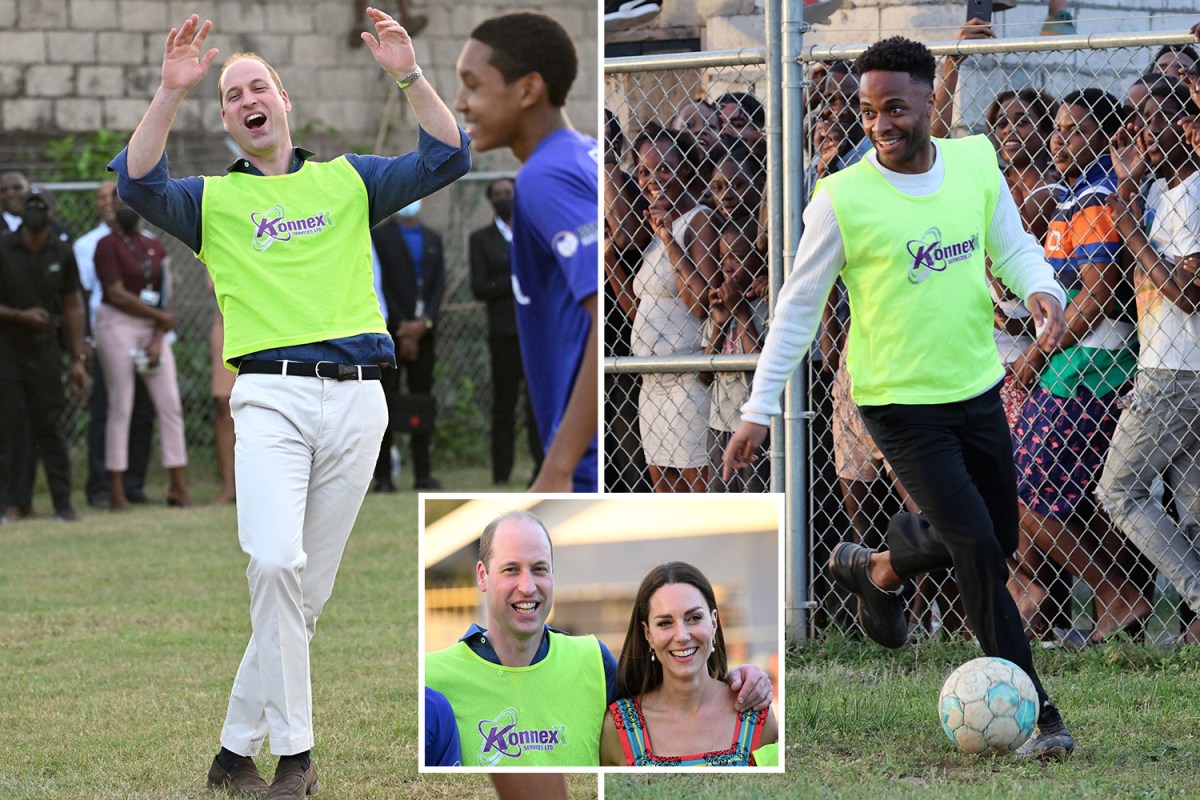 He dusted off his loafers and donned the number 10 vest to take on football legends in front of awe-struck locals in Trench Town.

The Duke of Cambridge gleefully exchanged passes with the Manchester City striker who flew out to see him.

The Aston Villa fan also showed off his skills to Jamaican international Leon Bailey in the sweltering heat.

The stellar match was watched by many locals who fussed around the grass field to catch a glimpse of the royal couple.

Sterling, who was born in Jamaica, flew in to see William despite being in England’s internationals this Saturday.

The frantic footie Wills was met with a roar of praise after helping Sterling score the winning goal during a friendly match that ended 1–0.

He passed the game despite his ill-fitting shoes, as the future king forgot to bring his running shoes.

The 39-year-old FA president cautiously asked an aide if they had spares, but stayed to play in his brown suede shoes.

Another member of his team could be heard asking a man standing nearby, “I assume you don’t have running shoes?”

But the duke continued, no matter what, and Kate proudly watched him from the side.

His number one backer was also flocked by adoring locals who reached out over the fences to shake hands with the duchess.

The pair even hilariously slipped into the bobsleigh while meeting the Jamaican national team on their trip to Trench Town.

The couple were then set to head to a banquet in Kingston tonight after a busy day.

The Cambridges had previously left Belize’s jungle paradise to board their plane for Jamaica.

Wearing a red YSL jacket she bought at the University of St Andrews 20 years ago, Kate stunned the crowd as she embarked on a 90-minute flight.

She and Wills stopped on the top step to give a royal salute and wave goodbye.

The stylish Duchess then changed into a bright yellow dress by designer Roxanda, appearing in Kingston.

The couple were greeted by former Miss World Lisa Hannah, 46, a member of the Jamaican opposition party.

They are then welcomed to the home of the Governor General as they help celebrate 60 years of Jamaican independence.

The royals were also on their way to see Bob Marley’s house and sample chicken jerky during their cultural trip to the Caribbean.

THE DUKE AND THE DUCHESS DIVE

Kate and Wills were diving off the coast of Belize on Sunday and shared the footage on social media last night.

Delighted members of the royal family shared three videos in which William, who launched the £50 million Earthshot Prize to find ways to save the planet, spoke about the vital conservation work being done.

The Duke and Duchess donned wetsuits and swam with meter-long nurse sharks as they oversaw plans to save the Belize Barrier Reef in South Water Cay.

A source close to the duo said: “The Belizean government asked them to see the incredible reef with their own eyes.

“I had to see the conservation work being done in this particular area.
“They had a great time. They swam with nurse sharks.”