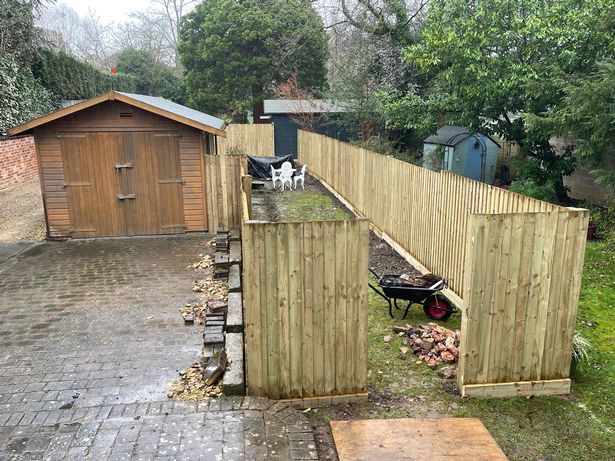 RESIDENTS scolded a neighbor who decided to build a fence in the garden, reminiscent of a “pen for sheep.”

The Victorian property in Cheltenham, Gloucestershire is owned by four people with one common outside area.

Despite this, the resident ridiculously decided to fence off her own backyard plot, reports Gloucestershire Live.

A 1.8 m high fence separates the area and is considered an “eyesore” and “sheep paddock”.

The creation of the fence meant that the communal trash can was moved, causing further inconvenience and frustration for other residents, especially the elderly.

Alice Reeve, a resident who lives with her elderly mother, said: “My mother and I have lived here for 35 years.

“This is an interesting property. This is a beautiful Victorian building overlooking Pittville Park.

“It has always been the case that apartments share a garden at the back. It’s always worked over the years – it’s a very open space.”

Alice went on to explain that the troublesome resident moved here about five years ago, and immediately made it clear that she intended to increase privacy.

“She wants privacy, but this is absolutely ridiculous. I can look out of my bedroom window and into “her garden.”

“I could also just look over the fence, so that doesn’t give her any privacy.”

According to Alice, this test equally affected other residents of the house.

“I feel sorry for the poor neighbors,” she explained.

“Their kitchen window now faces the fence. The apartment in the basement also now has a view only of the fence.

“I heard people call it an eyesore, a sheep pen, and things like that. It’s absolutely terrible and all the neighbors were screaming about it.”

Alice said the inconvenience caused by the barn led her and other residents to object to the construction plans.

“The trip is so long and the food containers are heavy. At the end of the day, we just want to get them and that’s part of everyday life,” she added.

Her mother, Annie, was equally shocked and “disappointed” by the saga.

She said, “I’m so disappointed in her – that’s how I feel. She can really do this to vulnerable people.

“I think there’s greed attached to it all. I called it a sheep paddock!

“I’ve been living here for 35 years and things like this just don’t happen. It’s a little shocking.”

The fence was erected after the planning application was approved by the local council, over the objections of Alice and the other two apartments.

Apartment four stated that “the proposed fence would be an absolute eyesore”, while apartment 2 was “appalled” that the resident could get her project approved.

Incredibly, their housemate also filed a second application to “erect a garden shed behind the existing garage,” which again was unanimously opposed by all three tenants.

The resident who was building the fence was approached but declined to comment.