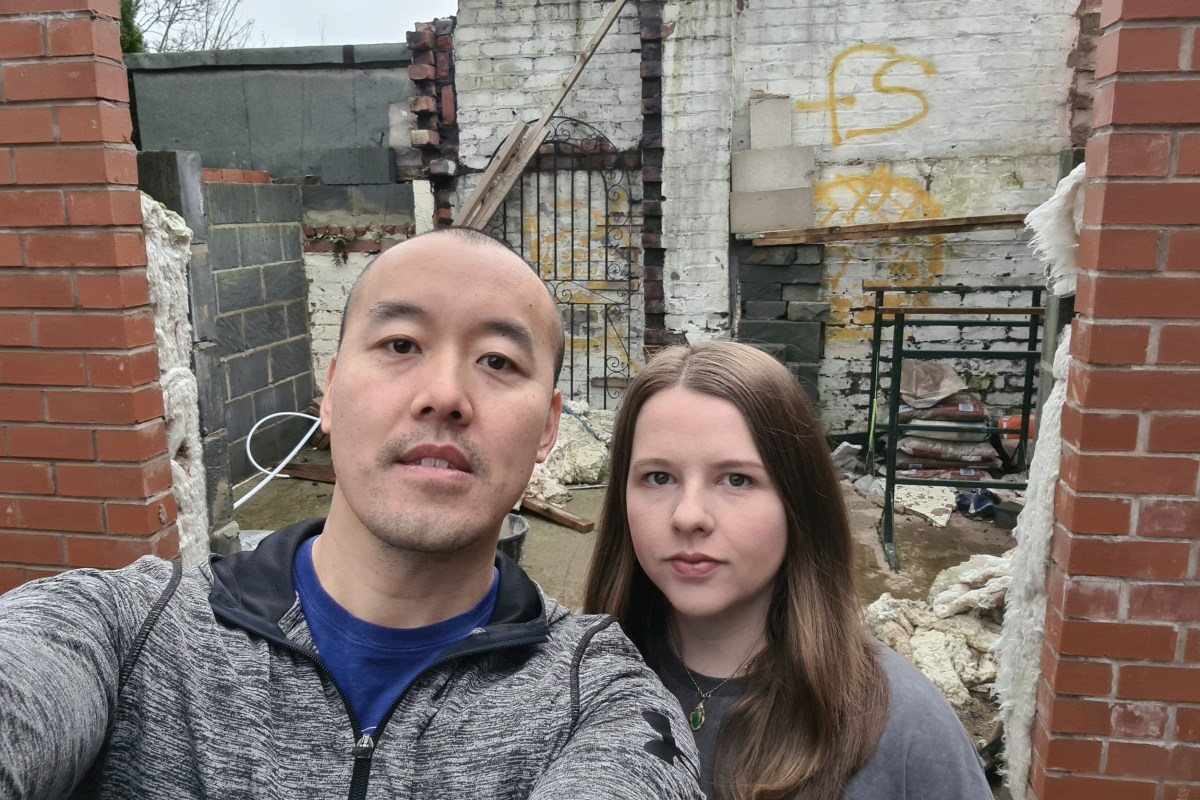 A HEAVENLY couple have criticized a hungry construction worker who stole £14,000 from their savings after stuffing McDonald’s wrappers into ‘unsafe’ walls that will have to be demolished.

Lisa Gillibrand and her hubby claim they forked out thousands of pounds in savings they were hoping to use for IVF treatments when a fictitious construction worker ran off with their money.

Last March, the couple paid a merchant £9,070 for materials to expand their garden in Widnes, Cheshire.

Lisa, 32, and Keith, 39, were forced to chase the builder for three months, as he had only completed part of the job during that time.

They were told that the work would be completed within a month, but they were stressed by the extra expense while Lisa was undergoing IVF.

The fictitious construction worker reportedly disappeared in May, leaving a devastated couple with precarious walls stuffed with fast food packages.

Lisa and Keith still have £14,480 out of pocket and have been forced to completely abandon their renewal plans.

But the cocky builder said the couple would have to sue him to get the money back, as he believes he’s done enough work to justify it.

Keith said: “It was a total stress. It was during lockdown so we couldn’t get away from it all.

“Because the building was intended for our growing business, we were worried that it would be badly damaged, which eventually happened as we had to fork out another £6,000 to rent storage space around October on a building that was due to be built. finished in April.

“I felt betrayed and frustrated as we gave him the benefit of the doubt and were very kind to him, offering cold drinks and food.

“When he just gave us excuse after excuse and now looked back knowing he would never give us the materials we paid for up front and never finish the build.

“At first he was really professional and said he could do whatever we wanted. He gave us a quote on a letterhead – nothing seemed strange.

“He said he would require a deposit for materials up front. It was £9070. As soon as we paid, he became a completely different person.

“It was very strange. He said, “I’m going to start from this date,” then it came to this date, and I asked, “Where are you?”

“He gave me a lot of excuses. We started to get very nervous because we handed over a lot of money, but they still did not appear.

“We got worried and said that all he did was carry bricks. On 27 March he demanded another payment of £1,600.

“When he asked for money, he was on it. I remember we were shopping and I said, ‘When I get home, I’ll send you a payment,’ and he called me.”

The builder completed part of the work, but began to refuse to complete the construction when it began to rain.

Keith then claims that he had to constantly stalk him before he completely disappeared and stopped answering his calls.

He added: “We pursued him. Then he justified himself because of the weather.

“We sent calls, emails and text messages. It got to the point where he actually said, “Keith, I can see Widnes from home. I see it’s raining, so I won’t come.”

“It was actually sunny. This shocked us because we thought it was pretty rude.

“He put up walls. One side was where it should be, and the other was not.

“We hired builders to come and check it out. They said the walls weren’t even tied down or anything, so it wasn’t safe. You could push him.

“He did a terrible job, which meant if we were going to fix it, those walls had to come down.

The couple even called the building authority to check on the progress of the work, but said they were told it was “not safe” as the walls “were not even connected”.

Then in May, Keith wrote a letter to the builder and told him he had two weeks to complete the job until further action was taken.

Lisa said: “At that time we were going through IVF and it was one of those situations where everything had to go right to get into the hospital.

“I had a lot of hormonal drugs. When it comes to IVF and pregnancy, the high levels of stress and loss of a lot of money when you’re hoping to start a family can be very difficult to handle.

“The first treatment was unsuccessful, which we cannot blame him for, but I would say that I definitely have doubts that I was in the best and most calm position at that time.

“Me and Keith, we run our business together. This is our only income, our only project, and this outbuilding was supposed to be for our business, so for several months we had to keep all our goods in our house.

The builder, who is believed to still be in the trade, said he does not believe the couple received a full refund as they did some work, but did not explain why he was still withholding the full amount for almost a full year. year.

He said: “It was not completed, but every story has two sides. It may not have been completed but that doesn’t mean I just spent £14,500 on the walls.

“Obviously the building has been demolished, all the foundations have been dug up, all the insulation has been laid, the concrete slabs have been laid and the brickwork is almost complete.

“I know there are a couple of problems with brickwork, but they can be solved.

“Building inspectors said we didn’t have enough wall dimensions. We spoke to a civil engineer.

“I waited almost four and a half months for them to develop the architectural design of the building, at which point my brother took a side job and he extended it until Christmas.

“Shortly before Christmas, I received a letter asking for a full refund. I don’t have to fully refund because I’ve done enough, I’d say at least 50 percent of the work.

“If I get proof that the building authority says it’s unsafe and needs to be demolished, I’ll give them back the money.

A spokesman for the Halton City Council says: “I can confirm that the couple contacted Halton Trading Standards and received some impartial advice. We can no longer comment on individual cases.”