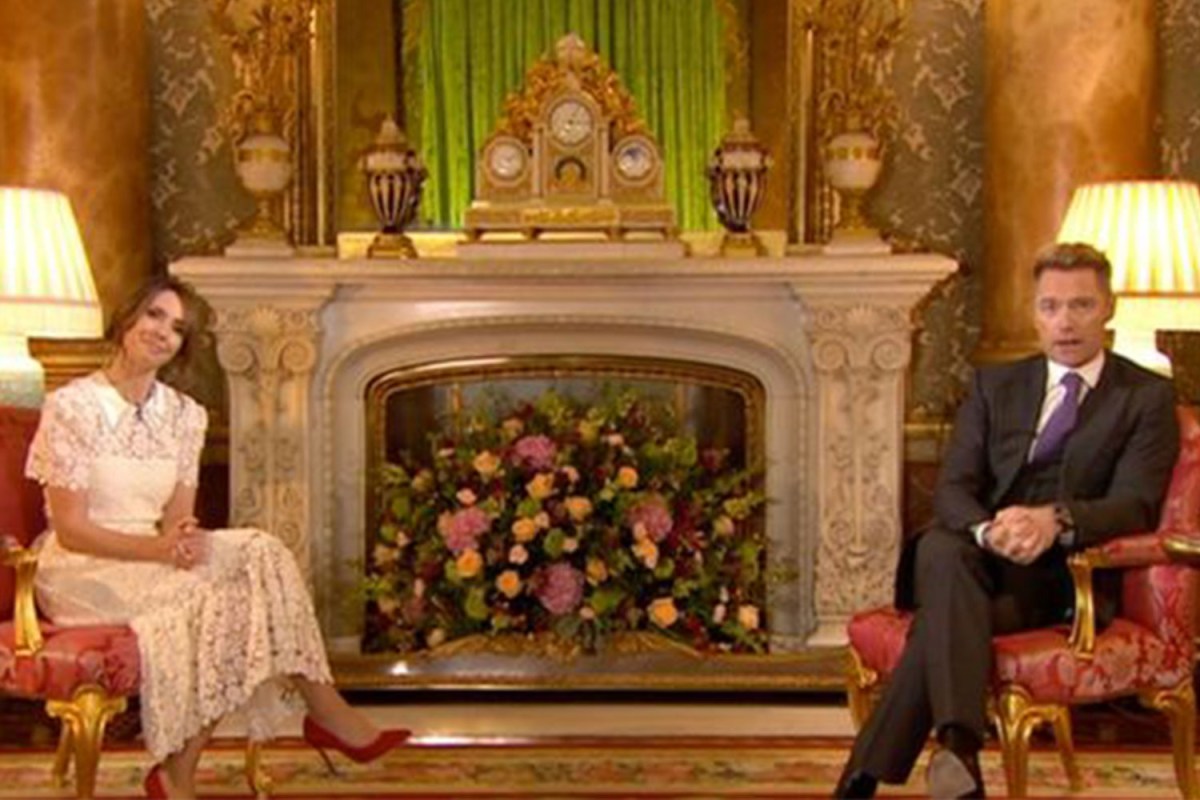 Fans of THE One Show shared their thoughts on the BBC’s new filming location.

In honor of the Queen’s Platinum Jubilee, presenters Alex Jones, 44, and Ronan Keating, 44, traveled to Buckingham Palace for the show on Wednesday.

They were joined in the blue living room by former MP Giles Brandreth and Masterchef star Monica Galetti for an episode celebrating 100 days until Queen Elizabeth’s Platinum Jubilee in June.

Despite the glamorous location, fans watching the show were unimpressed by the change of scenery and the early celebration of the anniversary.

“It’s all too much. Sorry. #theoneshow,” complained one fan on Twitter.

Another added: “What’s on tomorrow’s #TheOneShow? 305 days until the Christmas special?

Host Alex stated that it was one of her favorite days at work after sharing photos of herself backstage at the palace.

“My favorite bathroom selfie…in fact, this is one of my favorite days. The moment when you need to pinch yourself, ”Alex said on Instagram.

Wednesday’s show was also used to confirm that George Ezra was the first artist to wow audiences at the upcoming Queen’s Platinum Jubilee concert.

The 28-year-old singer will take the stage in front of 10,000 fans and millions of viewers at a live concert on June 4, dedicated to Her Majesty’s 70th birthday.

Appearing on The One Show live from Buckingham Palace, Capital Breakfast host Roman Kemp stood in the music room to announce the news.

In a statement, award-winning musician Ezra, who is currently ill with chickenpox, said: “Hi everyone, I can’t tell you how happy I am to be part of the Queen’s Platinum Jubilee concert, what an incredible honor to be asked.”

“I look forward to seeing you all on June 4th when we can bring pop and roll to the palace.”

The platinum party at the palace will consist of three stages, 3D projections on the palace façade and 10,000 spectators, Kemp announced.

He added: “It will be a lot of fun. June 4th, so you know the weather is going to be absolutely amazing, you’ll be live on BBC One and the coolest party you’ve ever been to.

“In addition, we will have rock queens, your favorite movie stars, TV stars, all the musicians you could ever dream of, and me and Clara Ampho back in action to see how people go.

“But the most high-tech thing we have is that the whole palace will have a 3D projection around it, so it will look smooth.

“It’s streaming live on BBC One and iPlayer, whether or not you’re one of the lucky 10,000 who got a ticket here, but honestly you can’t avoid it.”

Ticket voting opens at 7am on Thursday, February 24th and will remain open for one month, so everyone has a chance to win a couple of tickets.