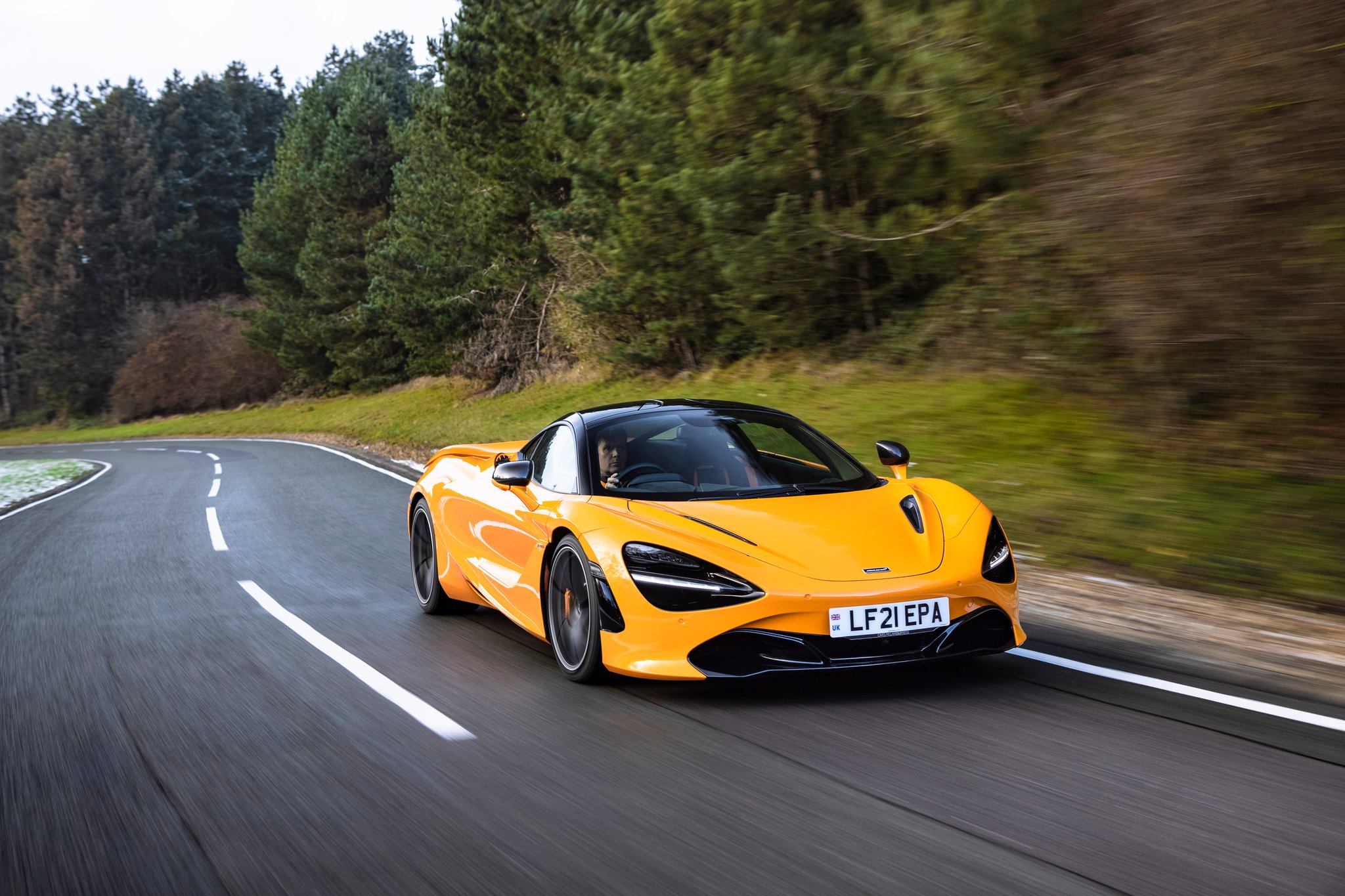 I wouldn’t recommend it as an alternative to strong coffee, but it certainly gets the blood pumping.

Mind you, this was not some pointless nonsense. The brief loss of traction occurred under the supervision of a professional McLaren driver and within the relatively safe confines of the Millbrook Proving Ground.

But it was a useful reminder that the McLaren 720S Spider is not a car to be taken lightly. On a cold, wet winter morning, just a little too much gas was enough to make the massive Pirelli P Zero tires break traction on the tarmac of the Millbrook Straight and make the rear of the car (and mine) twitch.

This happens from time to time when 710 hp are only directed to the two rear wheels, no matter how good your traction control system is. But that wasn’t enough to stop me from making a few more tries to see how close I could get to the sinister Helios Orange’s official 0-6 mph time of 2.8 seconds. The answer was not very good, but the swiftness of the car was still evident.

There is something very intuitive about how the 720S works. The breathtaking burst of acceleration is exacerbated by the piercing mechanical whine that comes from the twin-turbo V8 over the shoulder. The way you sit inches from the road, but surrounded by glass, gives you a good view of the world as it whizzes by. It’s not like being forgotten.

The way the 720S picks up speed is simply stunning, but perhaps even more impressive is the way it slows down. On the same cold greasy surface, near-accident levels of braking from three-digit speeds did not unsettle the car at all. Massive carbon-ceramic brakes pretty much stop the car, but the active rear wing also plays a significant role. Not only does it fold down to act as an air brake, it also increases downforce to the rear wheels, keeping the car evenly balanced and completely stable.

It’s the kind of smart engineering approach you’d expect from a brand that has its roots in the high-tech world of F1 and has been at the forefront of advancing supercar technology with its carbon fiber monocoque.

At the heart of the 720S, MonoCage 2 is the latest bodywork that underpins every McLaren vehicle from the GT to the Elva, helping the 720S record the lowest dry weight of any vehicle in its class.

That lightness obviously aids acceleration, but the lack of weight and incredible stiffness of the carbon fiber also play a central role in the 720S’s outstanding handling, which made it traversing the infamous Millbrook Alpine Track with ease, even with that bumbling dabbler at the wheel.

Lightweight, rigid construction, along with three-mode adaptive suspension, electronic chassis control and hydraulic rather than electronic power steering make for an utterly thrilling driving experience. Changes in direction, thanks to the perfectly weighted steering, are very precise, and it feels like the car is spinning around a central point. To call it agile is to underestimate the speed and agility with which the McLaren moves, yet it always feels composed and stable, even on uneven surfaces.

That kind of magic is impressive on a tough, technical stretch of road, but what’s impressive about the 720S is that it also makes for a supercar that’s relatively easy to drive under normal conditions. The steering is responsive but not harsh, so it’s usable in everyday traffic, and the throttle is easy to adjust when you’re not intentionally trying to provoke it. Despite its ferocious potential, you never feel like the machine is on a trigger.

That doesn’t mean it’s as suitable for everyday driving as a Porsche 911 or an Audi R8. They both impress with logical, comfortable interiors and thoughtful design, while the McLaren, with its wild dihedral doors, cramped cabin and extravagant interior styling, is all about drama and theatricality as well as usability.

But that’s what makes the 720S such a compelling car. Despite all this, it is surprisingly tractable at low speeds, it really comes alive when you make the most of its performance. Find the right site or road and you have an uncompromising and uncompromising supercar that has noise, spectacle, engineering excellence and breathtaking performance.