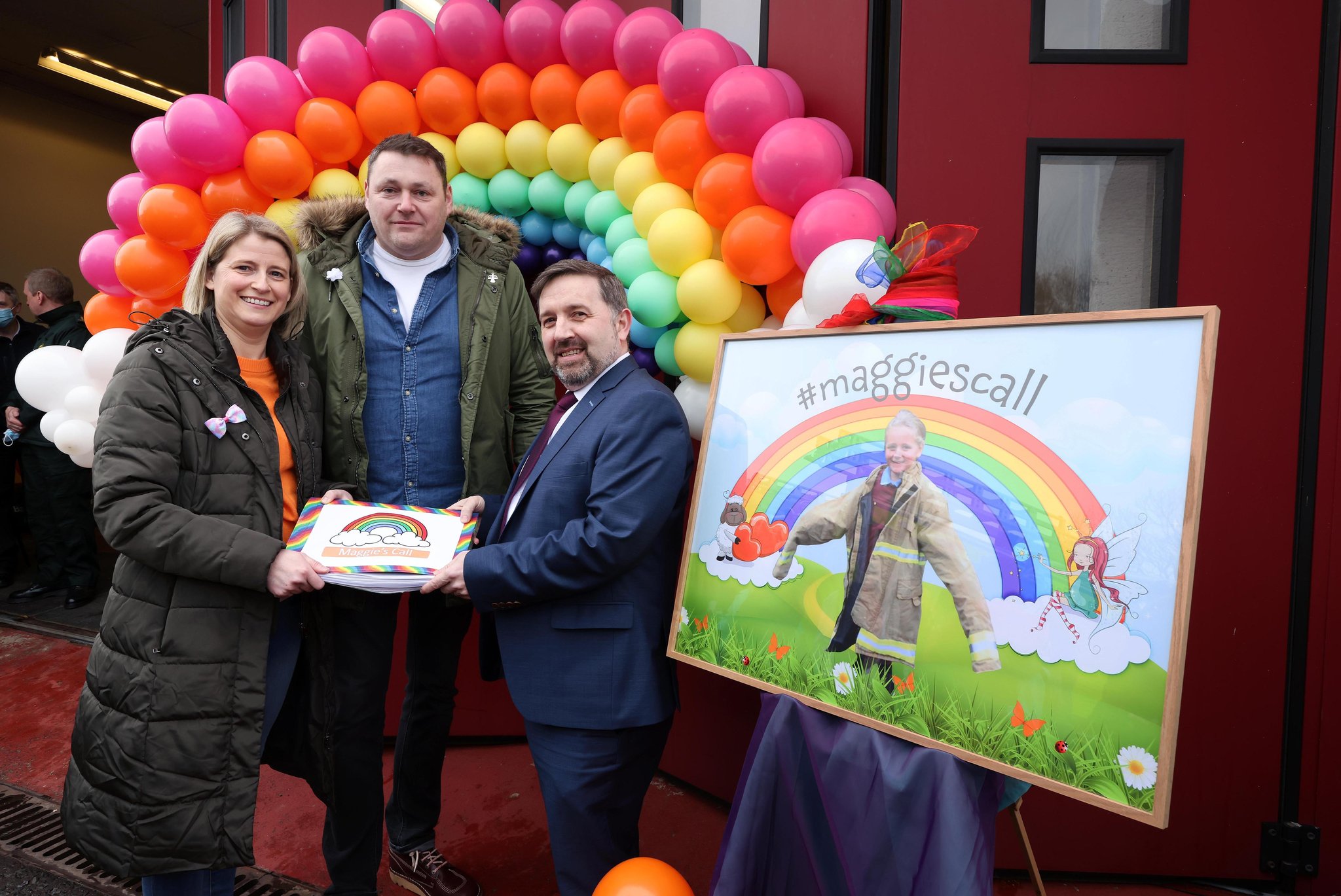 Health Minister Robin Swann made the announcement today (Friday) after meeting with the family of five-year-old Maggie Black, who sadly passed away in December 2021.

In memory of Maggie, the Black family of Glenarm launched a petition to have fire and rescue services automatically routed to emergency calls in the countryside.

The initiative, which is a collaboration between the Northern Ireland Fire and Rescue Service and the Northern Ireland Ambulance Service, sees the phased deployment of on-duty firefighters trained in joint incident response to rural areas where someone has had a fire. heart failure.

In the event of a medical emergency, members of the public must still contact Ambulance on 999. Northern Ireland Ambulance crews will still be dispatched to all calls, but local firefighters can respond to an emergency before paramedics arrive.

Speaking outside the Carnlow Fire Station, Mr Swann said: “I want to pay tribute to the Black family after the tragic loss of their daughter and sister Maggie. They have shown remarkable resilience in the midst of untold grief, and I am honored to share these plans with my family today.

“Undoubtedly, there is an overlap between the skills and capabilities of firefighters and the needs of health authorities in Northern Ireland, including the ambulance service. Any opportunity for firefighters to use the existing capabilities and skills they possess to deliver better health outcomes deserves consideration.

The “Maggie’s Call” petition garnered nearly 30,000 signatures and the family’s appeal was supported by the Northern Ireland Assembly and Meade and East Antrim Borough Council.

Maggie’s mom, Sheena Black, said: “Today’s announcement, the acceptance of Maggie’s Call, and the agreed implementation plans in memory of Maggie mean a lot to all of us as a family and community. We have successfully overcome our pain and made changes that can only save lives and help support the ambulance service. Two great services work together.

“We would also like to thank Peter O’Reilly, NIFRS Chief Fire and Rescue Officer, and Michael Bloomfield, NIAS Executive Director, for their commitment to Maggie’s cause. Finally, I would like to thank our Minister of Health, Robin Swan, for accepting our petition and putting in place a policy to ensure that more people can benefit from the services we received on the morning of December 1st.”

Fire Chief Peter O’Reilly said: “First, I want to express my condolences to Sheena, Brian and Maggie’s entire family on my own behalf and to the entire Fire and Rescue Service of Northern Ireland. Their strength and determination in this heartbreaking time is truly admirable.

“As an organization, we are committed to working in partnership with the Northern Ireland Ambulance Service to jointly respond to out-of-hospital cardiac arrest (OHCA) calls, with a particular focus on responding to rural communities at this stage. Our firefighters will be supported and trained to provide the best possible response in the worst possible scenarios. We know that by providing the fastest possible response, we can give patients the best chance of survival.

“Maggie’s Call has accelerated our plans to improve the way we deliver our services to people in Northern Ireland and we look forward to working closely with our partner agencies as we move forward.”

Northern Ireland Ambulance Service Executive Director Michael Bloomfield said: “On behalf of the Northern Ireland Ambulance Service, I would like to acknowledge the work of the Maggie Black family who, after the tragic loss of their young daughter, showed great courage and generosity. spirit to enlist the support of the local community, whose voice is clearly heard in the petition filed today. I hope that today’s news will bring them some comfort in the coming months and years.

“Today, I am pleased that the efforts of NIAS staff and our colleagues at NIFRS have led us to the point where NIAS can now call upon appropriately trained NIFRS staff to respond to certain categories of calls. in their local communities where life is at risk. Fittingly, Carnlow Fire Station is one of the first fire stations to be included in this new initiative, which will be expanded to other areas in the coming months.

“I have no doubt that this collaboration has the potential to save lives and will greatly benefit those rural communities where ambulance arrival times remain limited.

“I also want to thank Minister Swann and the Department of Health for their continued support and assistance in making this initiative a reality.”