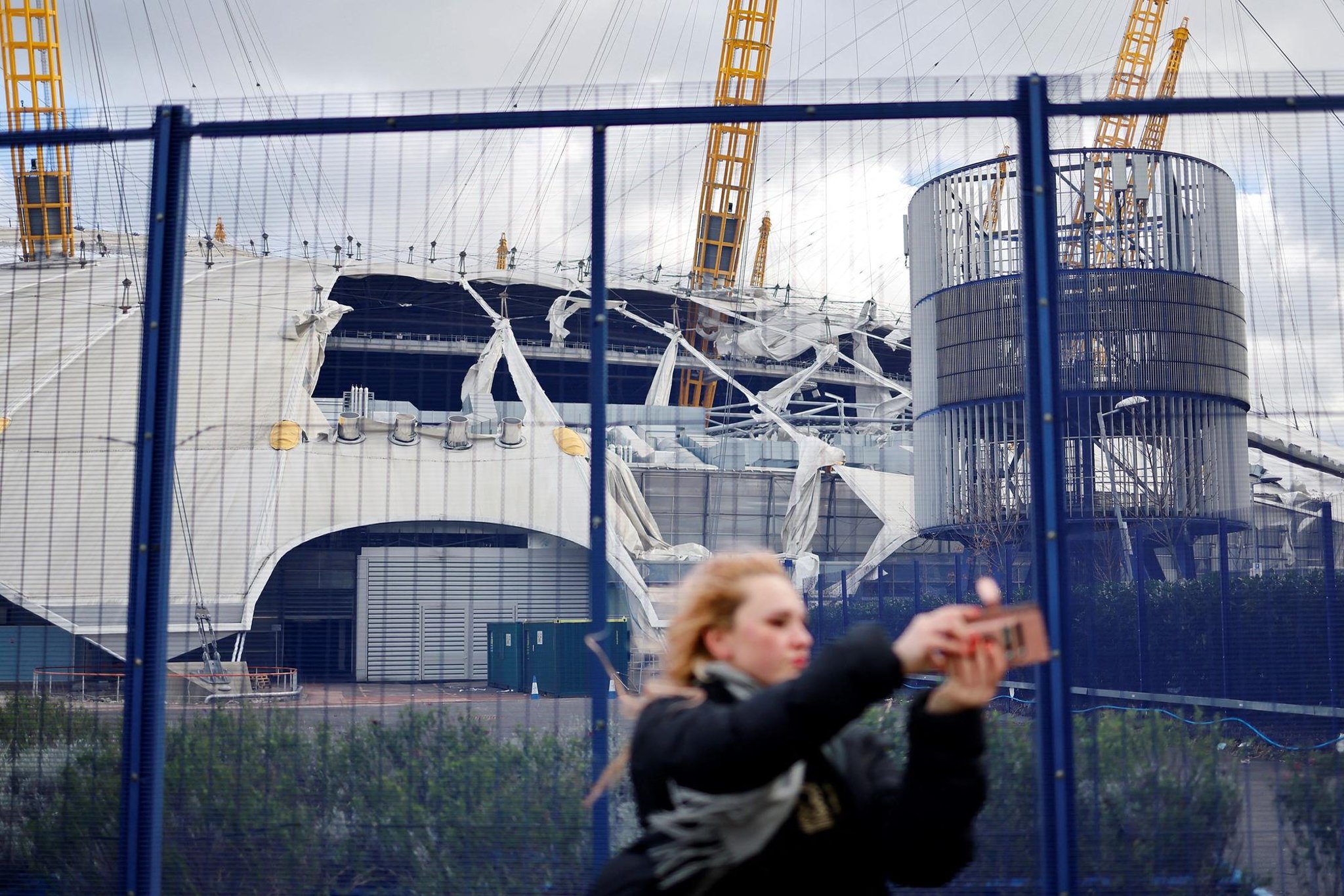 A pedestrian takes a selfie with the wind-damaged roof of London’s O2 Arena after Storm Eunice hit the country.

The practice of named storm warnings was introduced in 2014 to “make people more aware of them and how dangerous they can be”, and was modeled after an initiative by the U.S. National Hurricane Center in the 1950s to warn of potentially dangerous life and seriously destructive weather systems. Only in rare cases in the UK, such as the recent Storm Arwen, is this process fully justified.

This is not to downplay the human and financial impact or the recent turbulent weather, but by applying it to normally unstable weather systems, it dilutes the massage and treats us like children in constant need of care, guidance, and comfort.

Storm Eunice: These 20 photographs of Edinburgh from the 1950s and 1960s show the Capitol…

We are often reminded that “extreme weather events” are becoming more common due to anthropogenic climate change. This is reinforced in the minds of many by dramatic images of raging seas, flood tides, uprooted trees, and scorched, fire-ravaged landscapes. Such extremes are nothing new.

Rising CO2 levels are thought to be the main driving force behind such events, but these planetary disasters are more related to our ever-increasing population, demand for resources, deforestation, overgrazing and settlement in unsuitable areas.

At one time, the Intergovernmental Panel on Climate Change agreed that there is no significant global trend towards an increase in the frequency of storms, droughts or floods. Their interpretation has recently changed due to idiosyncratic wording of forecasts that ranged from “low confidence” to “very likely” in the 66 to 99 percent probability range. This is based on several climate computer models that do not account for many variables and do not present alarming worst-case scenarios. By redefining certain criteria, bad weather events turn into storms, thereby fanning the flames of fear and false perceptions.

It seems April Fool’s Day came early this year. RenewableUK, the voice of the wind and solar energy industry, is always keen to demonstrate that there is overwhelming public support for the development of onshore wind farms, as in their new survey (Scotsman, February 22), despite increasingly vocal host protests. communities and environmentalists are concerned about damage to peatlands, birds and other animals.

Their latest poll by YouGov did not determine the number of turbines that make up a wind farm, nor their height. There is little difference between a 15m and 260m turbine at the bottom of your garden. Respondents from rural Scottish areas were not 2 km but 8 km (5 miles) away from the wind farm. This distance likely includes rural residents who receive a “community benefit” from the wind farm developer but are too far away to be affected by any direct adverse impact, as well as landowners who are financially involved in the wind farm.

The membership of the Scotland Against Spin campaign group has more than doubled in the past two years as more wind farms are being built closer to home and more people are becoming aware of the disadvantages of living near or in their environment.

Does Renewables UK really expect us to believe this latest survey, which is not even open for review as there is currently no link to it on the Survation website?

Messrs. Grodynski and Grant lament the lack of funding given to our winter sports teams to compete against our Norwegian colleagues (letters, 23 February).

I’m afraid they don’t mention the basic ingredients for success in skiing, skating and other mountain sports.

Snow and ice are plentiful in the Arctic Circle and are easily accessible in Norway. Our winter sports centers are poorly maintained when the snow comes… our roads are closed.

Oh, let’s blame it on Westminster.

Murdo Frazier’s “memories” of protesting Nick Robinson’s report of the interrogation of Alex Salmond (Scotsman, February 23) differ from mine. I watched the related press conference live on the BBC and Nick Robinson’s coverage of it during the BBC News at Six on the same day, and I also remember the BBC’s coverage of the subsequent demonstration on BBC Pacific Quay.

While checking my memory with an internet search, I found a BBC Scotland report from 14 September 2014 of the protest, including a photo of a crowd from above. In this, the BBC reports: “A large crowd gathered outside BBC Scotland headquarters in Glasgow to protest the coverage of the referendum. Up to 1,000 people took part, police said. There is no mention of a crowd. Or torches and pitchforks.

The press conference took place on September 11, 2014. YouTube shows that Nick Robinson asked Alex Salmond two questions, one about RBS and a general one about business leaders’ comments, and that Alex Salmond answered both. This confirms my memory, as does the YouTube clip from the same day in News at Six where Nick Robinson says, “He didn’t answer.” It was this false statement that led to the peaceful protests of the people.

Nick Robinson has since said on Twitter that he worded his report poorly. Murdo Fraser should check before writing so as not to make mistakes in the wording.

Will the simple answer to Murdo Fraser’s article on IndyRef2 be splitting Scotland between Yes and No, as the current political stance is simply leading to a manageable recession for the Scottish economy.

Half a loaf is better than no bread, and it would at least allow both sides to focus on paying off the huge debts needed to finance the transition to a green economy.

Murdo Fraser’s column focuses on the administration of the SNP and its evasion of the truth. Fully agreeing with him, I feel he should also take a good look at Boris Johnson’s track record of being “economical with relevance”.

Between them, the SNP and the Tories have brought the public service into disrepute by embittering and cynical the electorate to the detriment of our democratic system.

Thank God there are people like Andy Davey and his letter on serial time (Scotsman, 23 Feb).

All other letters are full of doom and gloom, and in the middle a truly Scottish outlook on life is a feature of time and date. This made me very happy and strengthened my faith in human nature.

Vladimir Putin should not be blamed for the Ukraine crisis, which has been a three-decade failure of Western diplomacy.

The British, separated from our enemies by seas and oceans, do not understand how the long, shifting borders of this vast country give the Russians a very different idea of ​​security than we or the Americans have. Our country has been attacked by huge enemy armies more than once.

That aside, Russia has a legitimate interest in protecting the Russian minority that dominates the rebel regions and Crimea. In addition, Ukraine has no historical claims to Crimea, which was transferred to it only administratively by Nikita Khrushchev in the 1950s.

We must not forget that the Euromaidan revolution of 2014, which provoked the current division of Ukraine, led to the overthrow of the elected president, not the dictator. We also must not ignore the fact that the US State Department, the German Foreign Office and Western non-governmental organizations, especially the Open Society Foundation, sponsored the opposition and this revolution. The real way out of this crisis is negotiations. Both sides must agree on a new border that recognizes Crimea and the breakaway eastern regions as Russian. For their part, the Russians should drop further claims against Ukraine. Ukraine must also agree to neutrality between NATO and Russia.

Once again, there is a feeling that sport is separated from politics, as rugby and football are silent on the issue of sanctions.

Why not be very clear: any sport that allows Russian teams to participate will face immediate sanctions, including the removal of all tax breaks and government support and recognition.

If you need Russian money, limit yourself and your team/sport to competitions in Russia only.

On my very busy train from Edinburgh to Glasgow yesterday, about 50 percent of passengers were exempted from the requirement to wear masks, making public transport an even more desirable way to get around.

A lawsuit that I was supposed to take this week in the High Court of Edinburgh had to be postponed because my client has Covid. Client visits at Sawton and Greenock Prisons cannot take place today because my clients are in isolation.

It would seem that this is the perfect time to remove all restrictions on the transmission of Covid, it seems that it has almost disappeared…