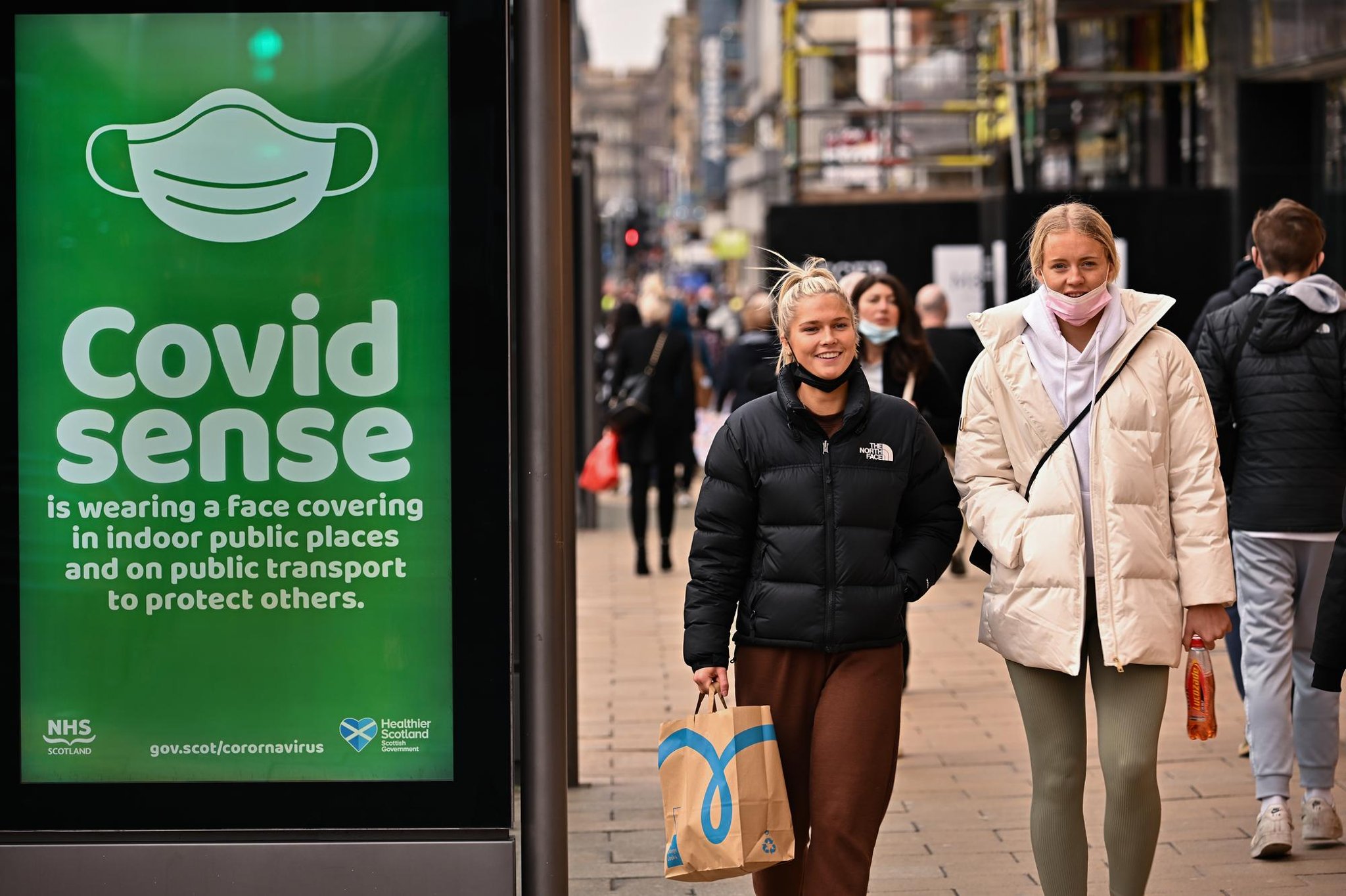 Current rules requiring face coverings in stores and on public transport are due to be reviewed by the First Minister on April 4 (Photo: Jeff J. Mitchell/Getty Images)

At the time, this level of Covid-19 occupancy was considered a cause for serious concern, and First Minister Nicola Sturgeon went out of her way to point out the need for further measures to control the spread of the disease.

In comparison, fears that the number of beds occupied by COVID-19 patients hit an all-time high of 2,128 on March 21 have been muted by reassuring assurances that the number of intensive care beds used to treat Covid-19 is significantly lower. than during a pandemic. previous peak.

The 2,128 beds currently occupied by Covid patients represent almost 17 per cent (one-sixth) of all acute care beds in Scotland. But in practice, the reduction in the availability of non-Covid care beds will be much larger than 17 percent due to the need to isolate Covid care and the number of staff illnesses that will inevitably occur among those caring for contagious patients.

The end result of this is that even so-called urgent investigations and procedures will be delayed and delayed at the last minute. Simply put, we are not in pursuit of one overarching goal that has been paramount throughout the pandemic; we are unable to protect the NHS.

Despite the attempt made to demonstrate that Scotland has responded better to the pandemic than our neighbors in England, the truth is that we are also allowing the debate about whether and when to lift the few remaining restrictions to be framed in terms of “getting our freedoms upheld” . There is a passing hint at the so-called “clinically vulnerable”, but in practice nothing is suggested to reduce the risk to which people in this “category” should be exposed.

And now to the official list of those who are considered “clinically vulnerable”, we must also add all those of us who must necessarily err on the side of caution because they had urgent investigations or procedures seriously delayed.

Each person in the expanded “vulnerable” category can choose not to go to a pub, nightclub or restaurant. But often this choice is not available in relation to other locations.

So, the Scottish Government, if despite record hospital usage and the threat of future peaks, you really need to start lifting restrictions, please consider keeping mask restrictions in place where the so-called “vulnerable” can’t make a choice – public transport. , shops and workplace.

Because just by doing this, you will demonstrate that the differences in politics between Scotland and England are not just a series of small cosmetic delays.

Covid Scotland: Why Scotland has higher Covid rates than England despite…

The plan segments the Scottish tech market but does not define which sectors are growing/shrinking both domestically and internationally. Similarly, there is no comparative analysis comparing Scotland with other countries/regions.

Consequently, the authors have no real understanding of the Scottish technology market. The result is a crude approach of unfocused initiatives. Why was the private sector avoided in formulating the strategy?

Trying to export technology is a difficult task, especially when there is no in-house customer base to rely on. Encouraging the local Scottish software industry is a fundamental first step. However, the local market does not welcome new entrants.

Try selling to the Scottish government and you’ll meet a wall of procurement “professionals” busy administering their own framework agreements. With a checklist of restrictive business practices, they suck the blood out of enterprising local businesses. Despite the buzz around fintech, accessing the B2B commercial technology market is not easy here.

The Scottish government could make a difference by limiting departmental IT budgets, instead encouraging the development of new Scottish software products. Even though billions are wasted, much of what the government itself develops is made to order and never commercialized. For example, it is Craneware that is leading the way in the export of healthcare management systems…not the NHS.

Hopeless foreign centers and the weary Global Scot initiative are a poor substitute for a thriving local market. A budding trading nation doesn’t need a business mindset based on the 1980s. The new Scottish technology export strategy should be based on less cool and more local IT.

I read with interest David Gracie’s statement on the letters page on Monday that Russia has no veto power in the Security Council as a party to the war. Surely this should initiate a process to allow other members to take over?

Never before have we seen on our television screens the daily horror that falls upon a civilized people as it happens in real time. NATO may well be right to fear a possible expansion of the war threatened by Vladimir Putin. However, the lesson is clear to everyone. Residents of the Sudetenland did indeed speak German in 1938, just as many Ukrainians today have Russian as their mother tongue.

Hitler used Western reluctance to intervene to push for his next conquest – Putin might do the same.

Does anyone remember or want to remember all those documentaries made after the revolution on the Maidan about sinister far-right militias with Nazi symbols on the streets of Ukraine? While they certainly don’t represent the 99 percent of Ukrainians, despite Putin’s absurd claims, this conflict could very well reinforce them.

The infamous Azov Brigade was included in the Ukrainian National Guard in 2014 as a reward for its role in liberating Mariupol from pro-Russian separatists, despite its involvement in some atrocities. Apparently, they are again the main defenders of this city.

It appears that some militias were greasing their bullets in anticipation of encountering Muslim Chechen soldiers fighting for the Russians.

I believe that in all wars we tend to turn a blind eye to the shortcomings of our allies in the struggle for a more important cause. I believe that mentioning Stalin’s atrocities against his own citizens during World War II would be frowned upon for fear of reinforcing Nazi propaganda.

However, the reluctance now to even mention these far-right militias, lest they help Putin’s propaganda machine, can be regrettable if the Ukrainian military reliance on their undeniable brutality and fighting skills gives them more power and influence than they can then use for their own purposes. . any post-conflict world with dangers to the tolerant, liberal-democratic outcome that we and most Ukrainians hope for.

Brian Monteith distorts Brexit. He also does not accurately represent what is happening in Ukraine, or the reaction of the UK (Perspective, March 21).

Brexit campaigners supported an anti-immigration and anti-refugee stance to regain control of the borders, even though the UK already had control. As a result, the Citizenship and Borders Bill is before Parliament. If it is not amended, it would allow Home Secretary Priti Patel to ignore the Geneva Convention signed by the UK in 1951, according to the UNHCR. It will be able to send people on the run, including children, to offshore prisons indefinitely.

This can apply to anyone, for example, spontaneously arrived Ukrainians who will be prosecuted. The Australian example of offshore detention in Nauru shows serious abuse and cruelty. It’s also prohibitively expensive.

Human rights law protects the common man from government excesses and is threatened after Brexit. It enshrines basic human rights for all of us, such as the right to life and freedom from the degrading and cruel treatment likely to take place in an offshore detention center. We are already seeing the effect of the lack of rights of European Union workers in P&O layoffs, as P&O did not lay off its workers in the EU.

Ukraine is being invaded by Russia, which supported Brexit and divided the EU. Russia is forcibly destroying cities and culture in Ukraine, even deporting Ukrainians to Russia in a horrific and sinister act. A quarter of the population has been displaced, and yet the UK exits the Geneva Convention with an inadequate visa approach to refugee security.

I was chatting with a friend about the current trend of games like Wordle. He mentioned geographic, Globle. I just tried it but it seems that Scotland is not a valid country.

I wonder if Nicola Sturgeon has tried this game?