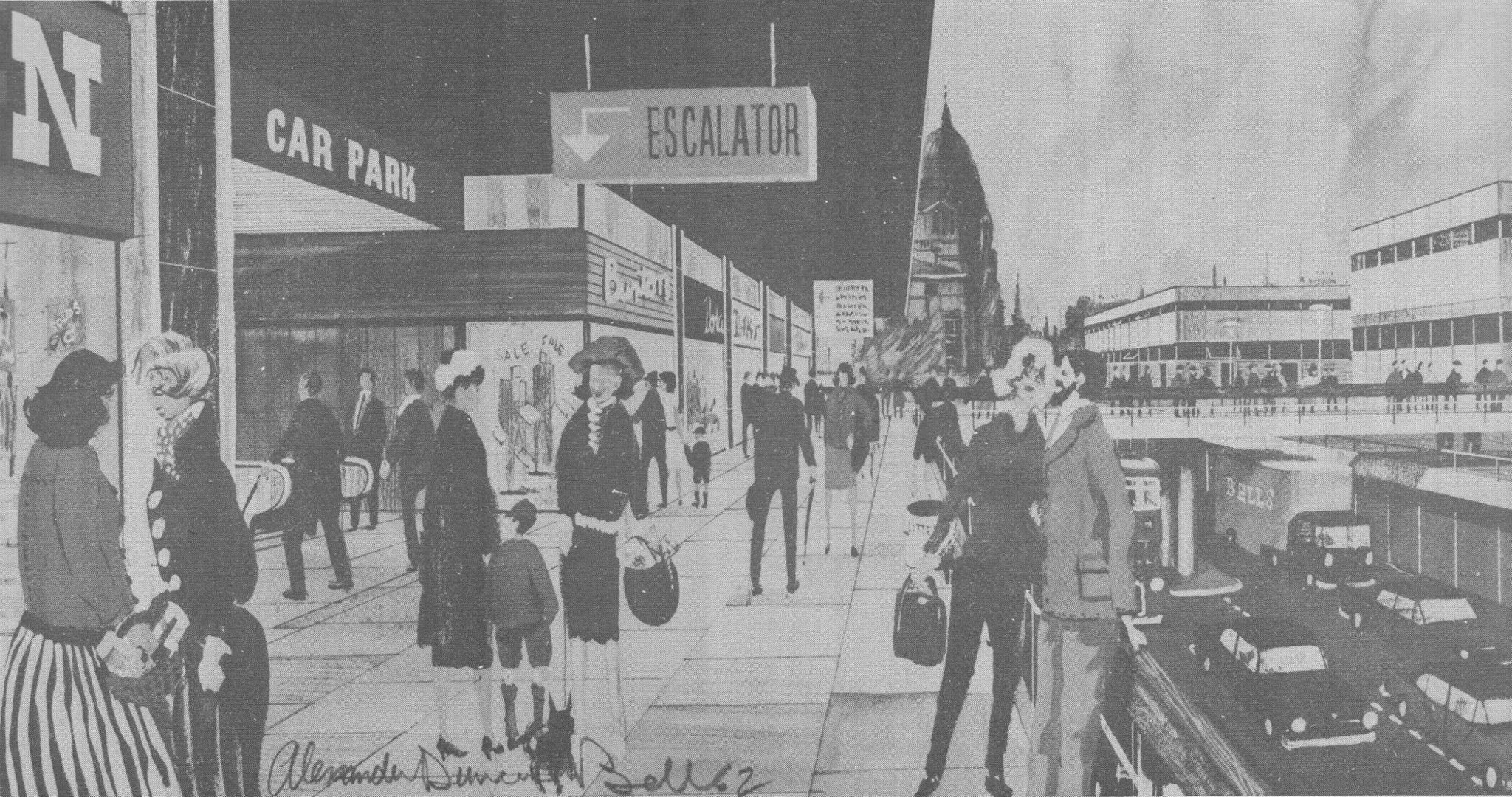 The new pedestrian platform is above Nicholson Street in Edinburgh, overlooking the University’s Old College in this artist’s view of the abandoned plans. Illustration by Alexander Duncan Bell from the Clive Fenton Collection, University of Edinburgh.

To the credit of my beloved Edinburgh professor, Percy Johnson-Marshall, he eventually turned down a massive proposal to demolish many of the historic buildings and replace them with faceless modern structures, connected by intrusive pedestrian decks.

One of the great results of this misguided plan is that it has ignited the conservation community and prompted it to redouble its support for the delicate rehabilitation of old buildings of architectural merit.

In June 1973, I was a member of a group of graduate students from the Department of Urban Design and Regional Planning (at 57 George Square) that produced a detailed report recommending an approach to preserving the Southside, as opposed to leveling the hard 18th and 19th century estimates. buildings that simply needed reinvestment to bring them up to modern standards. Surprisingly (to us students), our report caught the public’s attention and became the subject of an article in The Scotsman.

Four months later, similar recommendations were made by the Edinburgh Improvement and Transport Association, followed in March 1974 by Forgotten Southside, prepared by the University Provost’s Planning Working Group advocating the same approach. Around the same time, these efforts were supplemented by the hard work of the South Side Association.

In a happy coincidence, the approval of the huge St. James Center reduced commercial interest in redevelopment of the Nicholson Square area into a rival shopping district. Another fortunate development was the decision of the Crown Estate Commissioners in October 1977 to provide the necessary funding for the restoration of many of the buildings in the study area. Luckily for the Southside and the city as a whole, many historic buildings have been spared from unnecessary demolition, and the idea of ​​flooding streets under elevated walkways has become too big of a leap from reality for municipal officials to accept.

It was reassuring that Christine Jardine was generous enough to acknowledge that online insults to political opponents can take place across any party spectrum (Scotsman, February 21).

She is on less firm ground when she attributes the rise of this abuse to “identity politics.” It’s more of an idea that winning at any cost is in the nature of a campaign. If some activists believe that exposing personal weakness, past wrongdoing or duplicity can lead to victory, they resort to it. Of course, online abuse, sadly reinforced by anonymity, is now part of the lexicon. But vitriol has always been a tactic that could be used, even when the standard method of persuasion was chalk drawing on sidewalks or long speeches in town halls.

It is sad that outgoing BBC Scotland political editor Sarah Smith faced hostile criticism during the 2014 independence referendum. But I doubt her new role as a broadcast correspondent in North America will give her the anonymity she craves.

The events on Capitol Hill about 13 months ago should remind her of that. The attempted physical intimidation of the United States legislature has earned worldwide notoriety. The BBC was under an obligation to provide full coverage of this event and its aftermath. His reputation would have ensured that both sides of the dispute would keep a close eye on how the issue was covered. It would be wrong for Sarah Smith or any other correspondent to be condemned for reporting on this. It would be realistic to note that American politics may be even more hectic than that in Scotland, which presents a challenge for journalists from all over the world.

Christine Jardine complains of horrendous insults to Sarah Smith, but turns an otherwise fair analysis on its head, placing most of the blame on the first minister and her party.

By stating that the very nature of nationalism is to be personal and therefore seemingly offensive, she demonstrates an inability to see the reality of the situation. Every day, The Scotsman prints rude and nasty online comments attacking the Scottish government and the First Minister in particular, much more often than from independence supporters. It can be assumed that the really unpleasant ones are cut out.

The reality is that both sides of the discussion need to change their language, and both sides need to rein in their irritability. However, bleating about how one side is more offensive than the other, and that only opposing views are venomous, is completely pointless and shows the opposition’s inability to do anything other than counteract mindlessly.

Presumably Sturgeon did this because they were Scottish, but being British in and of itself was clearly unacceptable to the more bigoted “Cybernates”, causing Sturgeon to be pilloried on social media. What place has Scotland become since nationalist dogma has dominated Scottish politics?

Why can’t we celebrate the victory of women’s curlers at the Winter Olympics without arguing whether they’re British or Scottish? I remember watching Allan Wells in Moscow in 1980 as a teenager and celebrating its success. I knew he was Scottish, but he had the Union flag on his jersey because he represented Great Britain (then we didn’t have a Great Britain team). He would later represent Scotland at the Commonwealth Games. It was simple and non-controversial.

It’s been 40 years and now some people in Scotland can’t get over the fact that the athletes represent the UK and not Scotland. I even saw a journalist’s tweet about the “Scotland team” at the Olympics.

These were the athletes who chose to represent Great Britain, wearing the colors of Great Britain and wearing the Union Flag. It’s disrespectful to curlers when individuals try to claim victory for Scotland. We do not know how they feel about their nationality, but no one should try to manipulate their success in line with the political agenda.

Recent severe storms have highlighted our vulnerability to power outages. Turn off not only the light, but everything else. Heating, cooking, freezers, internet, mobile phone charging and of course electric cars all need this precious “juice” to function.

I learned about the risks associated with this recently when, hallelujah, we were connected to a high-speed fiber optic broadband network. However, at the same time, the engineers switched off our fixed telephone line with copper wire. Calls now go through the Internet. When this was turned off due to a power outage, the advice was “use your cell phone in an emergency”. But in our hilly countryside, none of the networks give a signal inside the house. In a real emergency, this is a problem.

Which got me thinking. I understand that electricity is better for us when we aim for “net zero”, but doesn’t dependence on one source of energy make us more vulnerable? If climate change means more unstable environments, network damage, crashes and failures, we are facing widespread multi-system failures and all the consequences that come with it. Talk to good people in Aberdeenshire to find out what it’s like.

If you want to further cloud this risk assessment, consider a well-planned cyberattack against our country. Destroy the grid and you’ll create as much havoc as a few well-placed bombs.

So my answer? I’m as energy sustainable as possible – electricity, yes, but also gas and a wood burner, among other things. Not ideal, I know, but a more reliable way to get around. I will conserve my carbon in other ways.

The current average wage in Russia today is around £14,000. The current pension payable is £140 per month. Meanwhile, under Putin, a large number of billionaire oligarchs have been created, benefiting from the “privatization” of former state assets.

It seems to me that the best way to contain Putin is to go against the oligarchs by freezing their assets and revoking their visas. This will cause a negative reaction to the current policy of the Kremlin.

If we look at the recent history of Russian adventurism, from the war in Chechnya, the illegal annexation of Crimea, the poisoning of people on the streets of the UK, the interventions of cybercriminals, etc., it becomes clear that such behavior must be decisively stopped, and every act of appeasement or closure an eye on the atrocities will simply give the Kremlin the courage to go even further.

Putin doesn’t need to invade Ukraine. If a third of Ukraine secedes and becomes a separate independent state, then Russia can tell the West that if they don’t interfere, then neither will it.

The presence of the Russian army nearby on maneuvers will help the West make a decision.