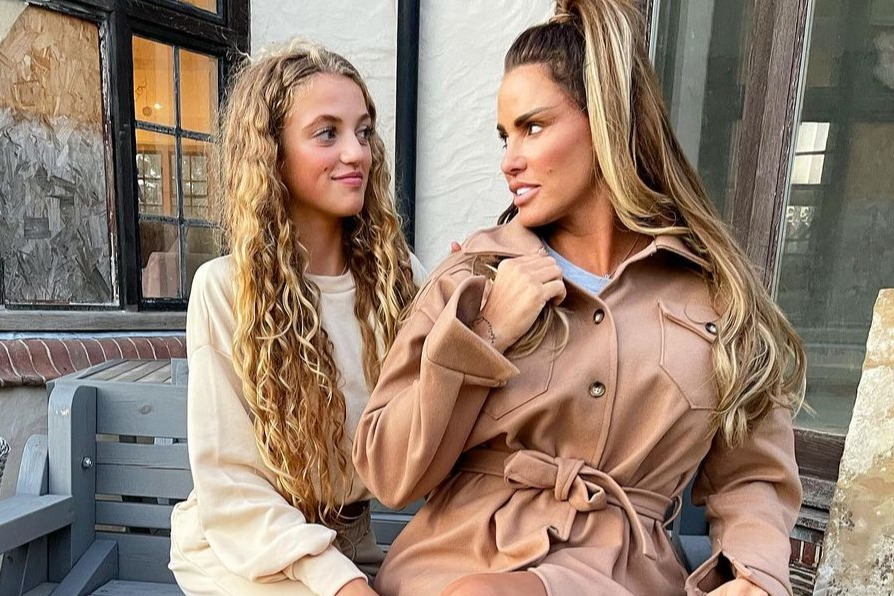 The mother-of-five posted a cute photo of herself and the princess’s 14-year-old daughter on Instagram in matching dresses.

Katy, 43, posted a picture of herself holding hands with her daughter, like a cute little baby looking into her eyes as she offered her a kiss.

Looking completely different in her days before she had multiple breast augmentations and facelifts, the star let her long dark hair fall down her back.

Along with a large pair of false lashes, the star opted for a dramatic makeup palette, including smokey eyes and nude lips.

Meanwhile, the princess was dressed in the same dress as her adoring mother, with a small diamond-encrusted hairpin holding her blonde curls in place.

“The way my gorgeous daughter princess looks at me and me, this love is unconditional and so strong,” Katie wrote in the caption.

Fans immediately flooded the comments section to admire the picture.

“What a beautiful photo you have, I can’t believe how much it has grown lately,” one fan wrote under the picture.

“Nice picture,” said the second, and the third intervened: “This is so cute.”

It comes after Katy wowed fans by looking completely different in a snap taken staggeringly 27 years ago, before she launched her glamorous career.

The former model, who rose to fame as a page 3 girl at The Sun, has been smiling at the camera in the young snap since the beginning of her career.

Katie could be seen with her naturally curly hair flowing down her shoulders and beaming smile in the 1994 picture.

Dressed in a red t-shirt and a blue and red plaid blazer, the then 16-year-old kept it natural with minimal make-up, wearing only mascara and nude lipstick.

So much like her eldest daughter the princess, Katy looked fresh and innocent before her modeling career.

The picture was taken before Katie, who was named Katrina Amy Alexandra Alexis Infield at birth, later taking her stepfather’s surname Paul Price, changed her name to Jordan as part of her early career.

Under the name Jordan, she continued to compete in the third series of I’m a Celebrity Get Me Out of Here ten years later in 2004.

There she met her first husband, Peter Andre, who during their four-year marriage had two teenage children – a princess and 16-year-old Junior.