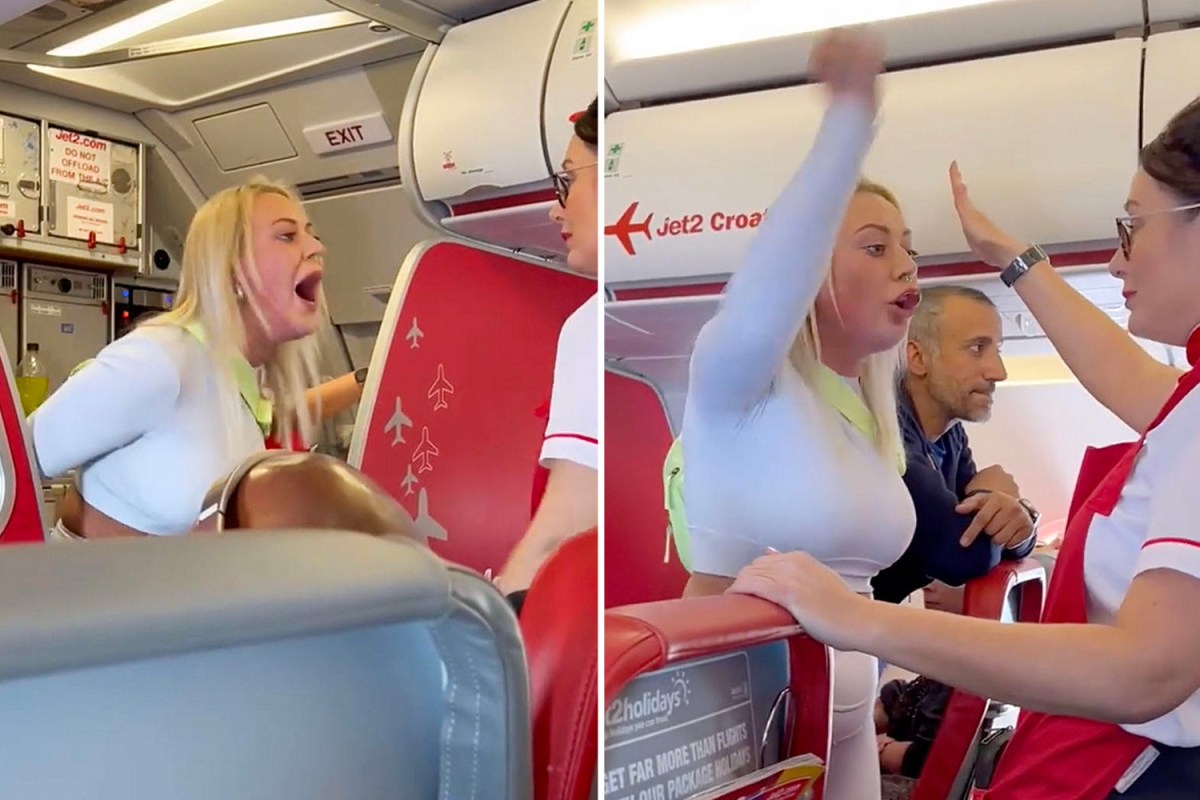 The pilots of JET2 erupted in applause as a woman who was yelling at a flight attendant and allegedly slapping passengers was kicked off the plane.

A noisy woman was taken off a flight from Manchester to Turkey and removed from the plane after the plane was diverted to Vienna.

Shortly after boarding a crowded flight on Monday, she caused a commotion in the air at thousands of feet.

The shocking footage shows the blonde, believed to be from Kirklees in West Yorkshire, pacing up and down the cabin before yelling at crew members.

She can be heard repeatedly yelling, “What did I do wrong on this flight?”

The woman then proceeds to yell at the members of the Jet2 crew and approaches the flight attendant, who is trying to handle the situation.

The footage shows a member of the crew telling her to “get away”, to which the angry woman replies, “I’m back. Deal with yourself.”

The airline worker then tells her, “You’re not doing yourself any favors.”

But the restless passenger replied, “You don’t do favors either.

The shocked pilots watched as the line unfolded just inches away, and one person seen in the video shook his head in disbelief.

The plane took off from Manchester Airport around 9:15 am on Monday for a four-hour flight to Antalya.

But the pilots were forced to make an unplanned maneuver in Vienna after the woman went on a rampage.

One passenger claimed that she even physically attacked other travelers before an explosive confrontation with a flight attendant.

Around 11:40 a.m., the woman was escorted off the Jet2 aircraft, where officers were waiting for her.

Shortly before lunch, the airline sent a text message to passengers on board apologizing for the incident.

It read: “Hello, we are sorry that due to the disruptive behavior of your fellow traveler, your flight has been redirected to Vienna.

“We are working on the situation to get you on your way as soon as possible.”

Triumphant travelers then applauded as she was taken away by the police, and shouts of “goodbye” were heard.

Another passenger joked: “Wait until you get the bill, my love!”

One passenger on board the plane, who asked not to be named, said a female passenger began to interfere “after about an hour and 20 minutes” of the flight.

They told the Manchester Evening News: “There was a lot of noise. Then she went to the nose of the plane.

She was very angry with the Jet2 staff and could not calm down. Her voice became louder and more aggressive – she screamed into people’s faces.

“She was very angry with the Jet2 employees and could not calm down. Her voice became louder and more aggressive – she screamed into people’s faces.

“People said that she started at the airport even before she got on the plane. Then some people said that it was because of the children crying in flight.

“The client said something and she punched him in the face. A man then stood up to try to mediate the situation before taking her to the back of the plane.”

The passenger claimed that the staff had decided to divert the flight to Vienna.

When the plane landed, the woman allegedly hit another passenger as she exited the airline.

The passenger added that the Jet2 staff handled the whole situation “very well”.

A spokesman for Jet2 said of the incident: “We can confirm that flight LS895 from Manchester to Antalya was diverted to Vienna this morning so that the offending passenger could be dropped off.

“As a family friendly airline, we have zero tolerance for disruptive behavior.”