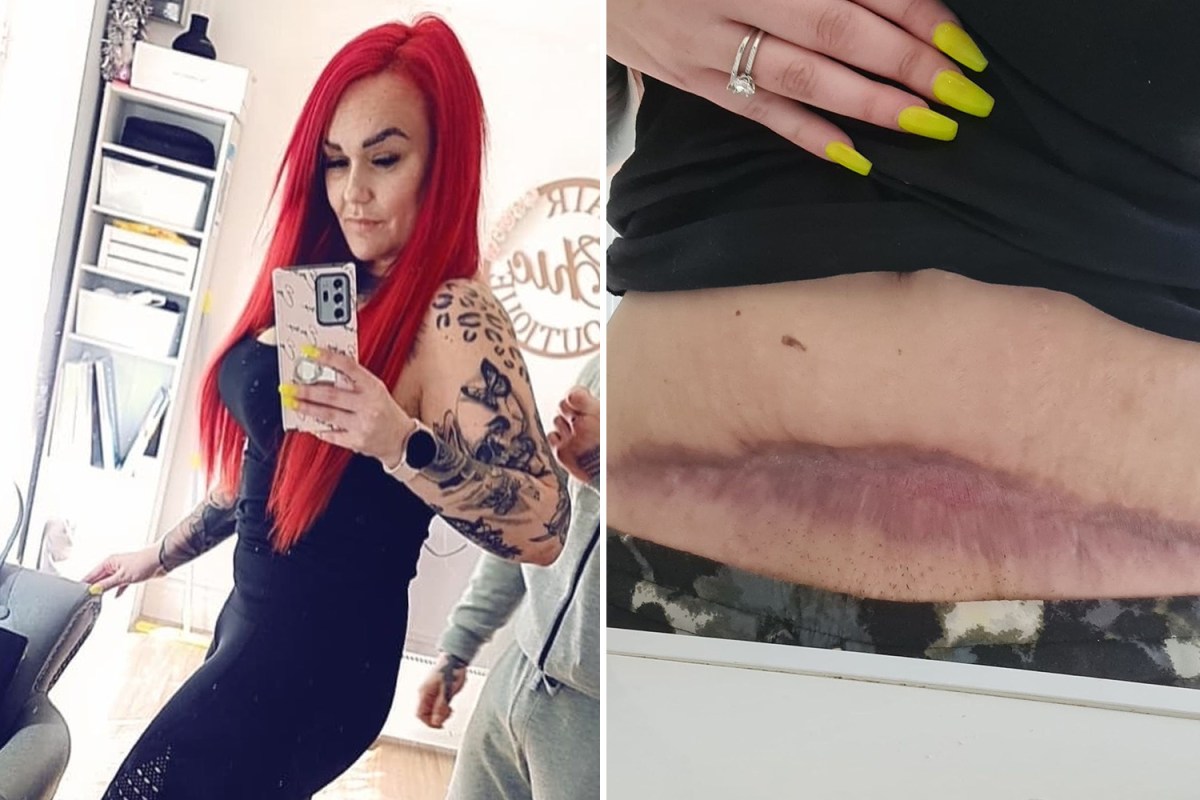 Mom claimed she was ‘stabbed to death’ by a £3,500 tummy tuck and now has a scar from her thigh to her thigh.

34-year-old Emma Bestol turned to a surgeon abroad, in Eastern Europe, to get rid of her “extra weight”.

The owner of the salon wanted to lose her mother’s belly after she gave birth to three children and subsequently lost 4.5 stone.

But her dreams of a washboard belly turned into a nightmare when, 10 days after returning to the UK, she was hospitalized due to an infection in her surgical wound.

The medics had no choice but to cut open Emma’s stomach from thigh to thigh to remove the infection.

She was left with such a large incision that she needed a skin graft from her thigh to close it, and now she has a thick band of scars on her thighs.

Emma says that although her partner, Liam Thomas, 37, tries to calm her down, she doesn’t love her body any more than she did before the surgery.

Emma from Sleaford, Lincolnshire, said: “I wanted to get a tummy tuck because I had three children, I lost four and a half stones and my stomach was not very beautiful. I had a speech.

“I was hoping it would shape my body a bit, I wanted a flat tummy.

“I was expecting a scar, but this scar is about two and a half inches wide and fits snugly around my belly.

“I’m uncomfortable in my skin and I feel like I’m wrapped in duct tape.

“I’m fighting with my body, it’s terrible. People compliment me and it makes me sad because they don’t know what it looks like inside.

“It doesn’t hurt, but it feels tight and uncomfortable, just massive and ugly.

Emma researched a clinic in Eastern Europe for three years before deciding to have the surgery and says she saved up for years.

As soon as she got off the plane, Emma claims she went straight to the clinic and had surgery shortly after.

Emma said: “As soon as we got off the plane, we drove to the clinic and I was in the operating room about two hours later, so it was a bit rushed.

“I was very excited and upset when they put me to bed because I was very nervous.

“As soon as I woke up, I just couldn’t believe what I had done to myself. I was in so much pain that I couldn’t walk or go to the toilet.

“I woke up in agony and cried until they gave me morphine.

Emma, ​​the mother of 14-year-old Harley Connell, 12-year-old Tilly-Mae Connell and six-year-old Oakley Thomas, has returned to the UK after being discharged from an Eastern European clinic.

Emma continued to clean the wound, but noticed that the infection was seeping through her bandages.

She said: “At first everything looked normal, but within a week my tummy started to open up.

“When I changed the bandages, I noticed that they were leaking, but I had never had operations before, so I thought it was normal.”

But luckily, Emma decided to go to the Lincolnshire County Emergency Department, where doctors told her she was badly infected and transferred her to Nottingham City Hospital.

There, the medics opened up Emma’s stomach and washed out the infection.

She was given a VAC (Vacuum Assisted Closure), a type of dressing that sucks air out of the wound, helping it stay clean and heal faster.

The wound was so wide that Emma’s thigh had to be skinned to cover it, leaving a scar two and a half inches thick.

Emma said: “They couldn’t close me properly because it’s so wide and I still have to go to Nottingham every week for checkups.”

Six months after the operation, Emma is still undergoing examinations at the hospital and now urges anyone who has plastic surgery abroad to look into the matter carefully.

Emma said: “The scar has healed but it has affected my mental health more than I could imagine, I don’t like looking at it.

“My other half comforts me, but I don’t care what they say to me.

“I saved up for years and it cost £3500 which is good compared to other places.

“If you’re thinking about getting any kind of surgery, please make sure you do your research first.”