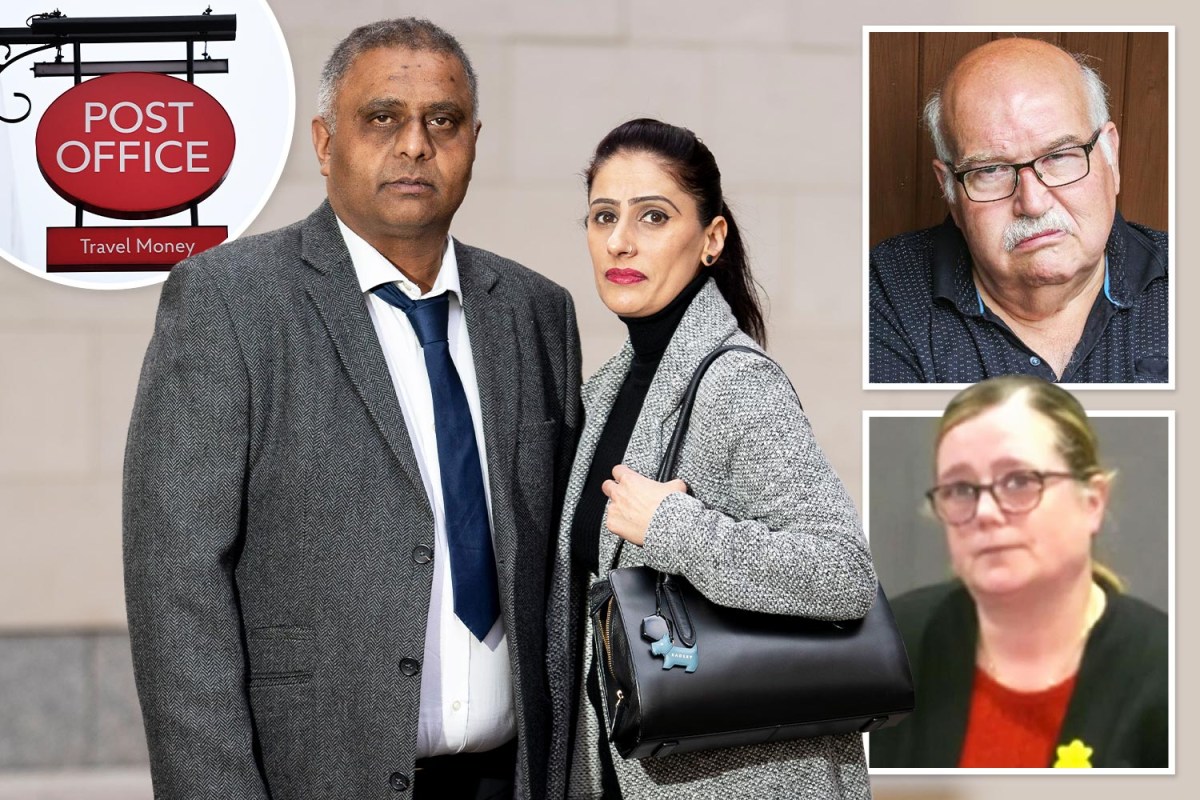 THEY lost everything – their homes, their savings, their reputation and even their freedom.

But the more than 700 falsely convicted junior postmasters, now recognized as the victims of the biggest miscarriage of justice in British history, have not seen anyone pay for the terrible atrocities they inflicted.

This week began a public inquiry into convictions for fraud, theft and false reporting between 2000 and 2014.

It was all due to data provided by a faulty Horizon computer system developed by Fujitsu and imposed on post offices by senior management.

More than 2,000 other workers were falsely accused of taking money from the cash register and having to pay it back out of their own pocket, often resulting in financial ruin.

To date, NOBODY from the Post Office, Fujitsu, or government officials in charge of post office oversight has been held accountable.

Now the sub-postmasters are demanding that the investigation change this.

They hope that they will finally find out who was hiding the truth about computer malfunctions and who ordered the destruction of documents related to the Fujitsu product.

So far, most of the anger has come from Paula Vennells, the post office’s chief executive from 2012 to 2019, who spent millions hiring legal advisers in a failed attempt to prevent deputy postmasters from overturning convictions. She is now an Anglican priest.

The investigation, led by retired High Court Judge Sir Wyn Williams, will also examine whether the politicians and civil servants who oversaw the post office should be held accountable.

Among them was the current leader of the Liberal Democrats, Sir Ed Davey, Minister of Posts in the Tory-Liberal Democrat coalition government at the time.

Some 2,500 junior postmasters have already applied for compensation and the total cost is expected to be around £1bn.

The post office says it can’t afford to pay, so the taxpayer will have to collect the bill.

A Post Office spokesman said: “We have no illusions about the damage done to the lives of the victims of this scandal and we have changed our work practices to ensure this does not happen again.

“A public inquiry is investigating what exactly went wrong and why, and we will await its results.

“We are fully cooperating with the investigation and expect a number of current and former employees to be called to testify in due course.”

Below, we share the heartbreaking stories of three junior postmasters who were wrongly sentenced to prison and ordered to pay huge sums, and who hope that justice will finally be served.

CHURCH OFFICER Tom went from a pillar of society to an outcast after receiving a seven-month suspended prison sentence.

The 68-year-old father of two has campaigned to have former Post Office CEO turned clergyman Paula Vennells stripped of both her CBE and her position in the clergy.

He also wants to prosecute former FA CEO Adam Crozier, who ran Royal Mail from 2003 to 2010.

He claims, “Crosier has had a brilliant career, but he is equally as guilty as Vennells.”

Tom was accused of taking £23,500 from his cash register. As one of the first to use the Horizon computer system, he claimed it was the culprit, but his pleas went unheeded.

Tom from Chapel St Leonards, Lincs, whose name has now been justified, says: “I was suspended from my job on the spot, three weeks later I was fired without delay, and a few weeks later I was called for an interview under caution.”

Although many other junior postmasters suffered the same fate, he was told that this was the only post office where such a sum was missing.

Like many wrongly convicted, he faced a significant prison term if he did not plead guilty.

It was a case for him to admit to something he didn’t do or risk his life as he needed a car to prevent the risk of a heart attack or stroke while sleeping and that was not guaranteed in prison.

He says: “I was so afraid of going to jail that it was almost like a death sentence for me.”

The father of three, Harjinder, was falsely accused of stealing £208,000 from the post office and received one of the longest prison sentences of three years and three months of anyone wrongly convicted.

There was no evidence that the 45-year-old man pictured with his wife, Balbinder, lived a life of luxury on the money he allegedly stole, but that didn’t stop him from ending up behind bars along with violent criminals.

He was unable to see his sick son, was declared bankrupt and lost his shop, home and two properties bought for rent, which were selected to pay the amount he was accused of stealing.

Having been unable to find work for the past 14 years due to a criminal record that was finally vacated last year, Harjinder is one of many former junior postmasters demanding that police investigate postmasters.

Harjinder of Chesterfield says: “The police should be making arrests, they should be questioning the postmasters.

“We don’t understand why the police haven’t intervened since we were acquitted because there is evidence.

“I want justice. I want someone to be blamed.

“I’m sick of hearing ‘Sorry’ and that we’ll be compensated. I want to hear how they say they will go after the people who hid the evidence.”

Harjinder is still unable to find a job and now lives in a rented house despite proudly owning his first home at 18.

He adds: “The government knows there’s more to come. The post office is run by the government.

“I have no confidence in the public inquiry. This should be a police investigation.”

Lorraine Williams, wrongly accused of stealing £14,600, is given a one-year suspended prison sentence.

LORRAIN still suffers from a form of post-traumatic stress disorder (PTSD) after her conviction.

The fear of going to jail in 2011 after she was falsely accused of stealing £14,600 from her small village’s post office left her under so much stress that her hair began to fall out.

The soft-spoken mother of a 56-year-old boy whose sentence was subsequently vacated talks tearfully about her ordeal.

Lorraine, from Llanddaniel, Anglesey, northwest Wales, says: “I had a ten year old daughter. I didn’t want to go to jail. I was an emotional collapse.”

When she went to the royal court, she pleaded not guilty because she was innocent of any crime.

But the judge told her to leave and “rethink” the decision, and Lorraine reluctantly agreed to a plea deal.

A year of probation plus 200 hours of community service is only part of her punishment.

Lorraine says: “I was shunned. My daughter was bullied. When I was walking her to school, someone came up to me and said, “I don’t like what you did.”

Prior to her conviction, she helped run a rural youth club, raised children, and was a caretaker of an orphanage.

She says: “I lost ten years of my life. I am a different person now. I’m angry and worried.”