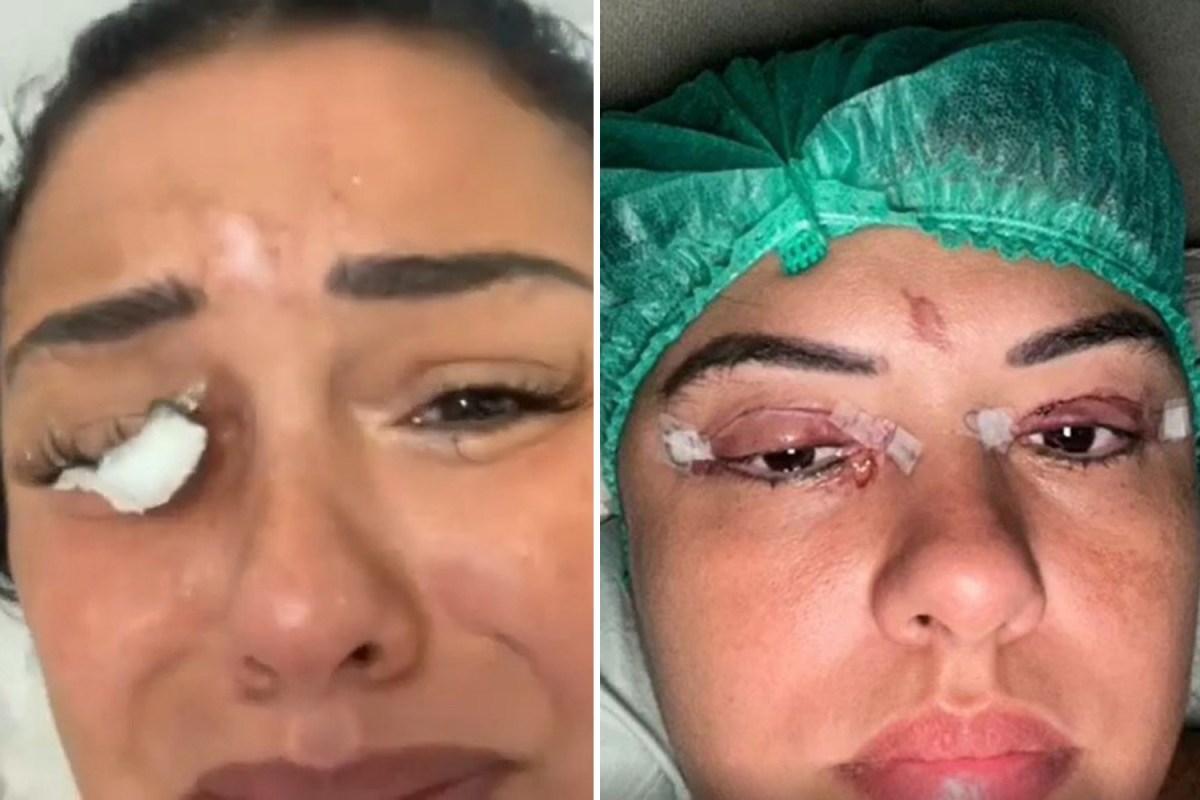 A WOMAN was seriously injured after a beautician allegedly stuck superglue on her eye.

Deusa Cannon do Amarante Calife from Brazil needed surgery and could have been blinded by the ingenious procedure.

The video, filmed at the salon, shows her crying as the clumsy lash technician tries to fix the mess.

The footage shows that cotton or a napkin stuck to the glue on one eye, and the woman cannot open it.

The incident took place in the city of Niteroi in the southeast of the Brazilian state of Rio de Janeiro in December 2021.

The case was only solved now, after Deusa went public.

She reportedly went to Werner Coiffeur to have her eyelash extensions applied with a semi-permanent glue.

But things went wrong when a beautician named Fabiana allegedly sealed her client’s eyes with superglue.

A trained lash extensionist must carefully adhere the false lashes to the real lashes and never allow the adhesive to touch the skin or get into the eyes.

The client claims that this resulted in second-degree burns and an ulcer, and the doctors had to operate.

The photos show the shocking result of the surgery on both of Deusa’s eyes, which were swollen, teary and red.

She had to put on a bandage over her eye, which was taped shut.

Doctors have said that there is a risk of damage to her cornea, however it is not clear how Deuza recovers.

Her partner, who was named Lucien Assis, claimed that no one from the beauty salon offered to call the doctors.

Speaking about the incident on social media, she said: “It was inhuman, they didn’t even call to offer any help.

“She was in despair, in pain, she felt very sick, with a glued eye and could not see.

The beautician also said that she used her forehead as a bath, applying three jars of glue mixed with a superbonder, because she learned how to do the procedure that way.

“She admitted that the glue was mixed with a strong binder when asked about the severity of the injuries.”

Lucien said other clients have also complained that “the lashes came off quickly right after getting the extensions.”

She added that the beautician supposedly “blames everything on his clients” and stated: “I will publish and publish what happened, I publish and will publish countless more publications, I just want justice.

“I won’t shut up even if they threaten to pour eyelash glue mixed with superbonder on my face. They won’t shut me up.”

It is currently unclear whether the alleged victim has filed a complaint with the authorities.

It is also unclear whether authorities have launched an investigation into the matter at the time of this writing.