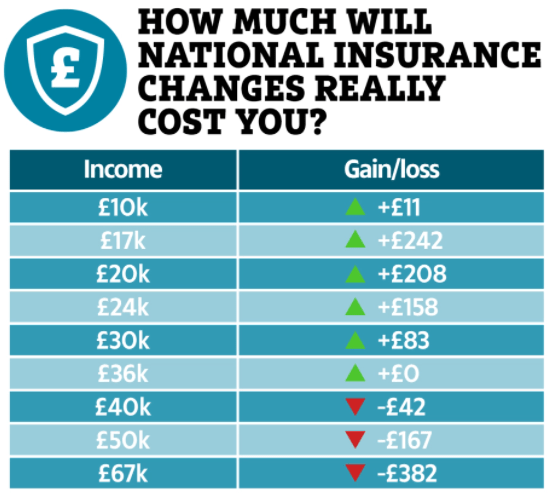 RISHI Sunak said today that he has saved workers £330 by increasing the amount people start paying in national insurance.

But we show how much you REALLY save – or lose – after also absorbing next month’s pending tax hike.

By issuing his spring announcement, the chancellor ignored a legion of calls to backtrack on the NIC’s controversial 1.25 percentage point rise.

This means that hundreds of thousands of families will pay less, and some of the poorest will not pay at all.

Mr Sunak welcomed: “This is a £6 billion personal tax cut for 30 million people in the United Kingdom.

“Tax cuts for employees of over £330 a year. The largest increase in the base rate threshold in history. And the biggest personal tax cut in a decade.”

But the £330 doesn’t account for the actual tax increase, which means people’s bottom line will be much less.

Calculations show that someone who earns £10,000 will be £11 better overall. Although they will be worse off by £1 due to the NIC increase, this is more than offset by the increase in thresholds, giving them £11 more.

The more you earn, the less you get from changes to the National Insurance system, because the tax increase outweighs the increased threshold.

The £36,000 mark is the point where there is no net gain from customization.

The Chancellor has resisted calls from many Conservative and Labor MPs to stop raising the national insurance rate entirely.

An increase of 1.25 percentage points is expected to raise £36bn over the next three years.

Ministers say the money will initially go towards addressing the huge NHS backlog caused by the Covid pandemic.

Once this is resolved, the money raised will be used to repair the broken British welfare system.

But the tax was invented before the cost of living crisis, which was exacerbated by the war in Ukraine.

The British are facing soaring prices for food, energy and gasoline, with inflation outpacing income.

Mr Sunak is increasingly insisting that Britain needs to balance the books after the huge costs of mass Covid testing and layoffs.

But inflation has skyrocketed tax revenues and eats away at the public debt, leaving the chancellor room to maneuver.

New data yesterday showed that the Treasury will now have to borrow £30bn less than forecast this year.