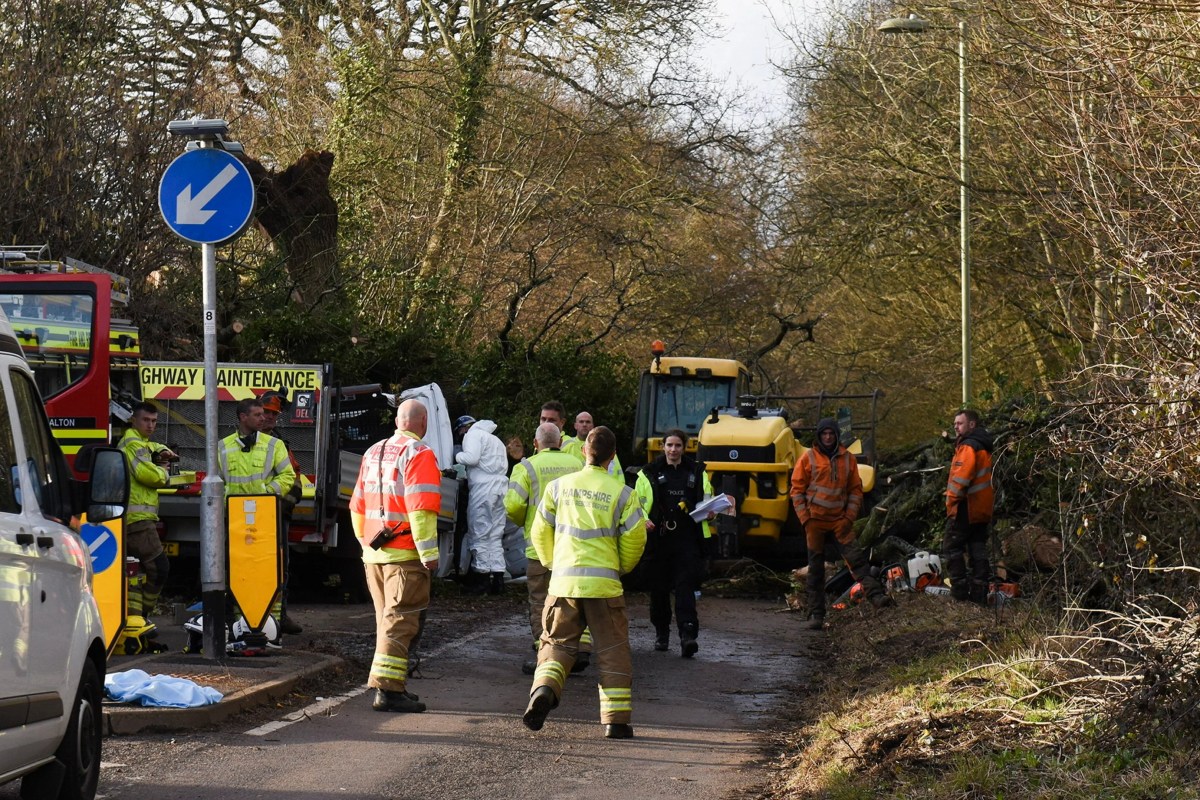 FOUR people have died after killer Storm Eunice hit the UK today in a 122 mph storm.

A man in his 60s was killed in County Wexford, Ireland while clearing rubble, and a woman in her 30s died in London.

The victim, aged 30, died in Alton, Hampshire, and the man was fatally shot in a car in Merseyside.

The woman who died was a passenger in a car on Muswell Hill Road, Haringey, when she was fatally injured by a fallen tree just after 4:00 pm.

The driver, a 30-year-old man, was hospitalized. His condition is not considered life-threatening.

A Metropolitan Police official said: “Officers believe they know the identity of the woman and her family has been informed.

“They will be supported by specialist officers.”

In Netherton, Merseyside, a man in his 50s died when debris hit the windshield of the car he was traveling in.

Another tragedy occurred in the trading town of Alton just before noon.

A tree at least 10 feet high fell on Old Odyham Road, a predominantly residential street with speed bumps and a 30 mph speed limit.

One person died, the second was seriously injured. Both were driving in a Mercedes-Benz Sprinter.

According to eyewitnesses, a white sheet was pulled over the badly damaged car.

The fire engine, two police cars and a JCB excavator remained at the site until noon.

Emergency workers were seen wearing bloody clothing as they rescued a victim.

A Hampshire police spokesman said: “Police were called at 11:49 am on Friday, February 18th about a collision between a Mercedes-Benz Sprinter pickup truck and a tree on Old Odyham Road.

“The officers were present at the incident along with colleagues from the Hampshire Fire and Rescue Service and South Central Ambulance Service.

“There were two men in the car, about 30 years old.

“Unfortunately, the passenger died at the scene. The driver was taken to Southampton General Hospital with serious injuries.

“The closest relatives of both men have been informed and supported by specialists.

“The police are investigating the exact circumstances of the incident.

The first victim died in Ireland while working with a colleague in Ballithomas this morning.

A council spokesman said: “It is with deep regret and sadness that Wexford County Council confirms that one of our employees was fatally injured today in a workplace accident.

“The accident occurred while an employee was driving to the site of a fallen tree in the North Wexford area.

“The employee’s family, An Garda Siochana and the Health and Safety Authority have been informed.

“Our thoughts and prayers are with the employee’s family, work colleagues and friends during this very difficult time.”

Police confirmed that the man was pronounced dead at the scene and an autopsy will be performed in due course.

According to the Met Office, today’s storms are considered the most severe ever recorded in England.

Roads were closed across the country after trees fell onto the roadway.

Airports have canceled hundreds of flights and the port of Dover has been temporarily closed due to bad weather.

The South Western Railway said at least 30 fallen trees are blocking key routes, causing all services to be suspended until tonight.

Both red warnings that were in effect over southern England and Wales have now expired, meaning that the strongest gusts of wind have likely ended.

London was for the first time seized with such anxiety.

The hardest-hit region, the Isle of Wight, recorded wind gusts of 122 mph this morning.

In the meantime, a major incident has been declared in Suffolk, while power went out to 55,000 homes, farms and businesses in Ireland this morning, and another 85,000 homes were left without power across England and Wales.

And more than 100 people were trapped on a ferry in the middle of the sea off the coast of Portsmouth.

About 90 passengers and 13 crew members are on board the Wightlink ferry, which was forced to anchor in dangerous conditions.

Yellow Warning in effect until 9:00 PM.

Yellow warnings for snow and ice in Scotland, Northern Ireland and the north of England will end tonight.

Yellow warnings for ice, wind and rain were issued over the weekend and on Monday.

Tomorrow the houses in the south will face beatings again.

Winds are expected to reach 60 mph across the Bristol Strait and along the south coast of England, and around 50 mph inland.