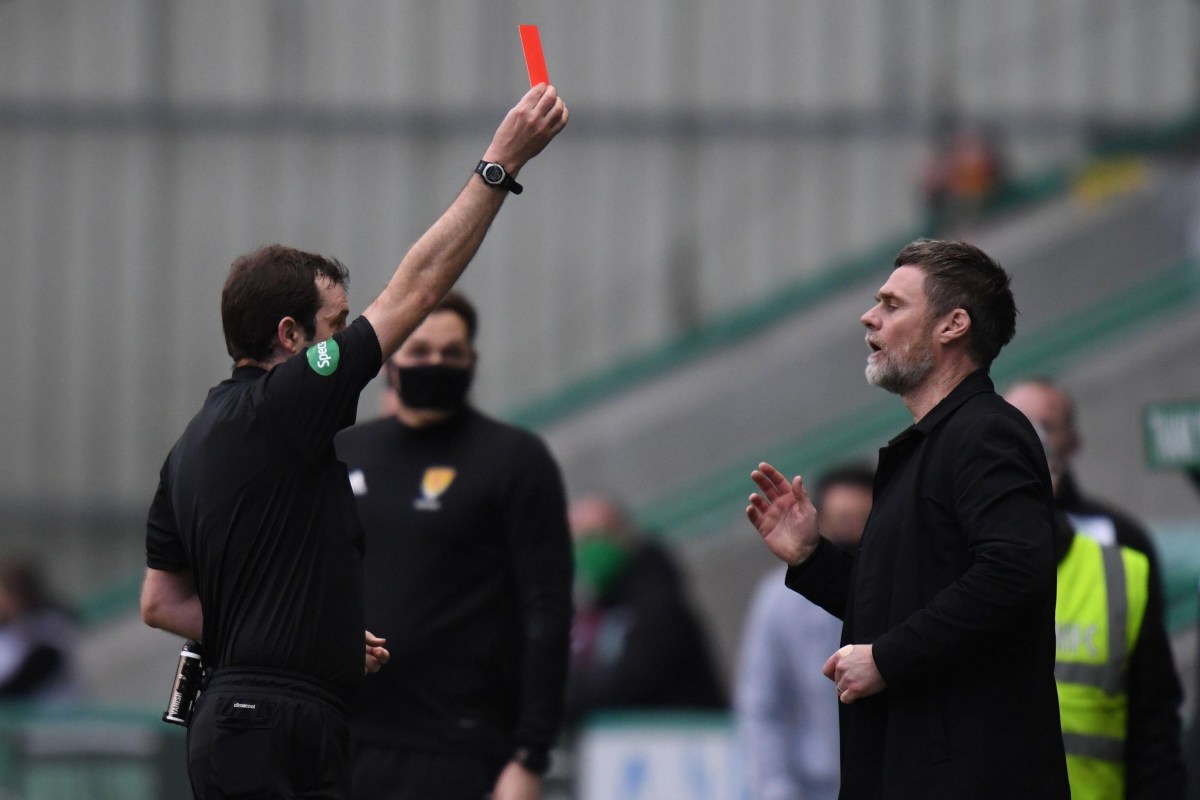 TELL any man who asks you a question to go away and be quiet, and he won’t like it.

In one sentence, Graham Alexander pretty much touched on the gulf that exists between the referees and the rest of the game.

On one side of this yawning chasm are players, managers, and coaches who exist in the real world, where bad decisions can cost points that can cost jobs. On the other hand?

Unfortunately, we are seeing a new breed of whistleblowers who seem to be floating in the clouds, where what they say, where they are always, always right – even when they are wrong – and where no one can question their authority.

It wasn’t always like that. We had a lot of referees who liked to have a little chat with the guys on the field and in the dugout – provided that everyone knew who was responsible for them.

The managers liked it. Players have stumbled upon it. It made everyone’s job more fun, even if a deadly business was at stake.

But lately, we seem to have released a generation whose key quality is the ability to support everyone – professionals, players and experts.

Pathetic men with a call center mindset. Everything they do is scripted, they all seem to be afraid of their superiors, and they are not allowed to put common sense over stupid rules.

And most of all, woe to the one who gets upset and raises his voice at them.

Yes, there’s also the fact that they’re making way too many game-changing mistakes these days – and there were a few absolute roars just this weekend.

It’s easy for me to accept this level of human error because we all make mistakes sometimes.

But it’s much harder to accept their dismissive attitude, this refusal to admit that sometimes they are wrong, and when they do, the people who are affected by their decisions sometimes raise their voices and become a little irrational.

This inability to deal with the reaction of the shop floor in heated situations is a serious shortcoming inherent in today’s match officials.

However, those who train them not only don’t try to change it, they seem to revel in it.

This is where Motherwell boss Alexander’s eloquent quote comes in. After 34 years in the game, he’s not half as angry about being kicked out to the stands for two games as he is about the way the punishment was handed down.

He describes his experience calling beaks on Zoom like this: “I was a schoolboy who didn’t do his homework.”

He spoke of the “brick wall” that exists between those on either side of the screen.

Also, he notes very well that the only person not on the call was referee Andrew Dallas, the person who sent him off in the first place.

This last point is meaningless, because, of course, if the defendant is to be given a fair hearing, he must be allowed to interrogate his accuser.

You know how with real, real justice. However, this is the J-word, well, no one believes what they are getting from the referee now.

I was in Fear Park on Saturday when Nick Walsh – one of our real, up-and-coming whistlers – gave a performance that epitomized everything that had gone wrong with the role.

To the whole world, it looked like he was trying to memorize so many pointless instructions, trying so hard to keep himself “right” in the eyes of his superiors, that he actually forgot to judge what was going on in front of him.

Walsh throws a punch, waves, then changes his mind and winds down the game for a foul – but not before Don left-back Johnny Hayes rushed into a tackle that caused massive handbags and left Mark O’Hara on the knee. the size of a basketball.

In the midst of this, Bates gets away with a sticky yellow stick for the initial infraction, Hayes isn’t even spoken to, and somehow Declan Gallagher and Bevis Mugabi end up getting a warning for engaging in a hand-to-hand fight that wouldn’t have happened. if he controlled the game properly.

For me, this little cameo says a lot about today’s number of referees and the instructions given to them from above.

Walsh came across as someone who didn’t “understand” the game itself at this level, who wasn’t able to handle a physical clash between two teams that were known to be in a real ding-dong state only a week prior.

It is his job, like the job of every referee, to command in the context of each individual match.

Their job is to go with the flow, to stay as long as possible in the shadows.

And when they do have to intervene, make sure everyone knows why they intervene.

Unfortunately, those further up the food chain have decided that none of these age-old givens apply anymore.

The depressing thing is that every game now has to conform to the mold they have set for their army of writers in black.

This is why you really have to laugh when we are told that the introduction of VAR will solve all the problems of Scottish football.

Because, as I have written here more than once, where the hell are we going to find even six of the best referees to sit in the truck and referee these referees?

THE Old Firm are on a double roller coaster as the season rolls on in full force.

And that doesn’t half the thrill for those of us who are watching from the sidelines.

It’s boring when they both win and it all comes down to how they play against each other.

But when are they as vulnerable as others? Now you are talking.

A couple of weeks ago, Celtic looked unbeatable and Rangers creaked.

Then Celtic had a shock against Bodo/Glimt right after Rangers produced something incredible in Dortmund.

The Rangers then came back to earth with a bang, dropping points at Tannadis before Celtic extended their lead to three points, but not for long.

I don’t know about the rest of the neutrals, but I’m quite happy with such a discrepancy from their pair.

It would be great if Rangers and Celtic could find a way to get through Thursday night’s Euro matches.

However, once they return to the home front, there will be more misses and panic as the race for the title draws to a close.

YOU WERE It’s hard to find a funnier man than the big Doug Bailey.

He was the life and soul of countless trips across Europe as I made my way in the newspaper game.

A bottomless well of anecdotes and father jokes when the nights were long and the results were rotten.

What’s more, this title-winning central midfielder-turned-sportswriter was also very kind and helpful to those who were new to what could be tough old school.

I loved the fact that as soon as he hung up his shoes – in fact, a few days after that – he made the jump to a whole new career on the other end of the interviewer’s notebook.

And yet, his words are always read as if he had been doing this all his life.

We lost this gentle giant of the game on a Saturday morning at the age of 85. I’m not sure we’ll ever find someone like him again.