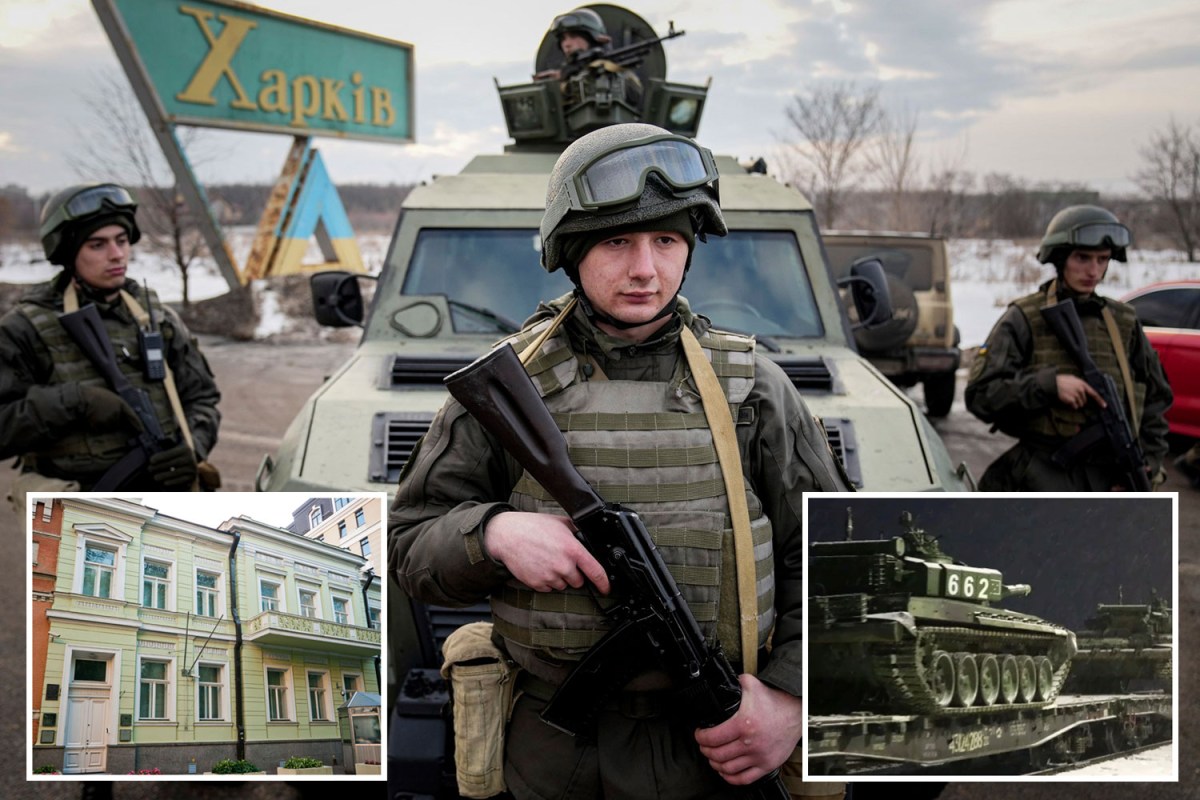 In another sign of the deepening escalation of the crisis, the British Embassy in Kiev announced that it was moving 336 miles west, closer to the Polish border.

The move was a reflection of the US embassy’s move last week and is believed to be for the protection and safety of staff amid fears of an imminent invasion.

About 6,000 British passport holders in Ukraine were forced to leave the country immediately a week ago due to rising tensions.

But most of them were thought to have stayed where they were last night after the embassy warned they could not assist in the evacuation in the event of a Russian invasion.

Putin signed a decree last night to mobilize his reserves as more than half of his army is sent to Ukraine and the West has warned that thousands will die if he unleashes the planned bloodbath.

Russian Ambassador to London Andrei Kelin warned Moscow that it “cannot stand by” if Russian speakers were killed in the Donbass, where a car bomb exploded last night.

Putin has already accused Ukraine of committing genocide on separatist territory, and both sides have accused each other of plotting terrorist attacks using chemical weapons.

This happened after the pro-Russian rebels ordered the mass evacuation of 500,000 people from the occupied territories on the edge of Ukraine.

There are fears that this could be a pretext for war, which Putin has been waiting for to send his army of 200,000 troops across the border to invade.

Rebel chief Denis Pushilin warned that it was now too dangerous for his men to stay, following claims that Ukrainian forces were trying to launch a doomsday attack on a chlorine plant.

Pushlin said the evacuation of hundreds of thousands of people from the self-proclaimed Donetsk People’s Republic must begin immediately, starting with women and children.

He urged people to leave and cross the border into Russia.

There have also been unconfirmed reports of a car bomb blowing up in Donetsk amid the unfolding chaos.

The danger of a potential attack on the chlorine plant was heightened by insurgents who claimed that explosions there could release poisonous gas, killing thousands of people.

But the evacuation order was given, despite the absence of explosions on the spot and the release of gas.

There have been concerns that the wild claims were a Kremlin-inspired scam to give Putin a long-awaited excuse to invade.

There are fears that this will be a so-called “false flag” – a fabricated pretext to give one side a casus belli.

Photographs show convoys of buses and lines of vehicles apparently trying to leave the rebel-held region, while video shows evacuation sirens blaring in the streets.

Other images show people queuing at ATMs to withdraw money and huge lines of cars at gas stations.

And Russian tanks, troops and warplanes are said to be “combat-ready” and could be brought down on Ukraine on multiple fronts “at any time.”

Pushilin said in a televised address: “From today, an evacuation has been announced, first of all, women and children are subject to evacuation.

“We kindly ask you to start evacuation, this will save your life and health.

“The evacuation will be carried out in agreement with the leadership of Russia, the evacuees will be placed in camps in the Rostov region.”

The announcement of Russia’s response was expected later today, days after wily dictator Putin claimed Ukraine was guilty of “genocide” in the Donbas.

The emergency was triggered early this morning by an attack on a chlorine plant that pro-Russian rebels blamed on Ukrainian saboteurs.

The rebels said they fought off a Ukrainian strike group as dramatic video footage was released showing it was a shootout.

They claimed that mercenaries from NATO member Poland were involved in the shootout near Gorlovka in the so-called Donetsk People’s Republic (DPR).

The militants said they had killed two members of a Ukrainian militant group and seized a body camera.

These claims could not be confirmed, but the alleged attack reflects Western intelligence predictions of an effort to provide Vladimir Putin with a pretext to invade.

The statement of the “People’s Militia” of the DPR says: “Our observers recorded the movement of two groups of special forces of the Armed Forces of Ukraine, numbering 10 and 12 people.

“Our defenders were forced to open fire from duty weapons.

“The enemy suffered losses of at least two killed and three wounded and was forced to retreat.”

The footage is reportedly taken from a body camera of a Ukrainian soldier captured by rebels near the village of Zheleznaya Balka.

The police statement added: “According to our intelligence, the saboteurs planned to blow up a container with chlorine on the territory of a sewage treatment plant near the city of Gorlovka (Gorlovka).

“Personal protective equipment and foreign-made ammunition, as well as an action camera mounted on a bulletproof vest, were found at the site of the clash.

“Earlier, we reported on the participation of Polish mercenaries on the side of Ukrainian militants.”

They claimed that the target in this alleged separate incident was an ammonia storage tank at the Stirol plant.

“The armed formations of Ukraine are deliberately trying to sow fear and panic among the civilian population of the Republic and, for this purpose, they choose vital civilian objects for strikes.”

In mid-January, Ukrainian military intelligence warned that ammonia at the Stirol plant was likely linked to the stunt.

They said it could be a chemical weapons attack and that could be used as a trigger for an invasion.

The January statement said that the ammonia containers were delivered to Gorlovka, territory occupied by Russian troops.

It also warned that “a man-made disaster caused by the actions of the Russian occupation forces could be used to accuse Ukraine of using pesticides as a pretext for expanding armed aggression.”

The latest and most serious false flag warning comes just 24 hours after Prime Minister Boris Johnson called an artillery attack on a kindergarten in Lugansk a staged stunt.

This raised tensions to a new level when Putin was given a clearly fabricated pretext to finally order an invasion that could escalate into a World War III bloodbath.

A similar evacuation order was issued in separatist Lugansk on the orders of rebel leader Leonid Pasechnik.

And within hours, buses began arriving to ferry out families in the event of a potential exodus of half a million people from the strife-torn enclave.

Long queues began to form at ATMs and ATMs as families prepared to leave as air raid sirens wailed over downtown Donetsk.

Both Pushilin and Pasechnik blame Kiev for the war, but Ukrainian leaders insist they have no intention of attacking separatist regions and that the attack was rigged.

A spokesman for the Ukrainian government said of the evacuation: “Perhaps this is preparation for the start of large-scale provocations against Ukraine. including massive shelling.”