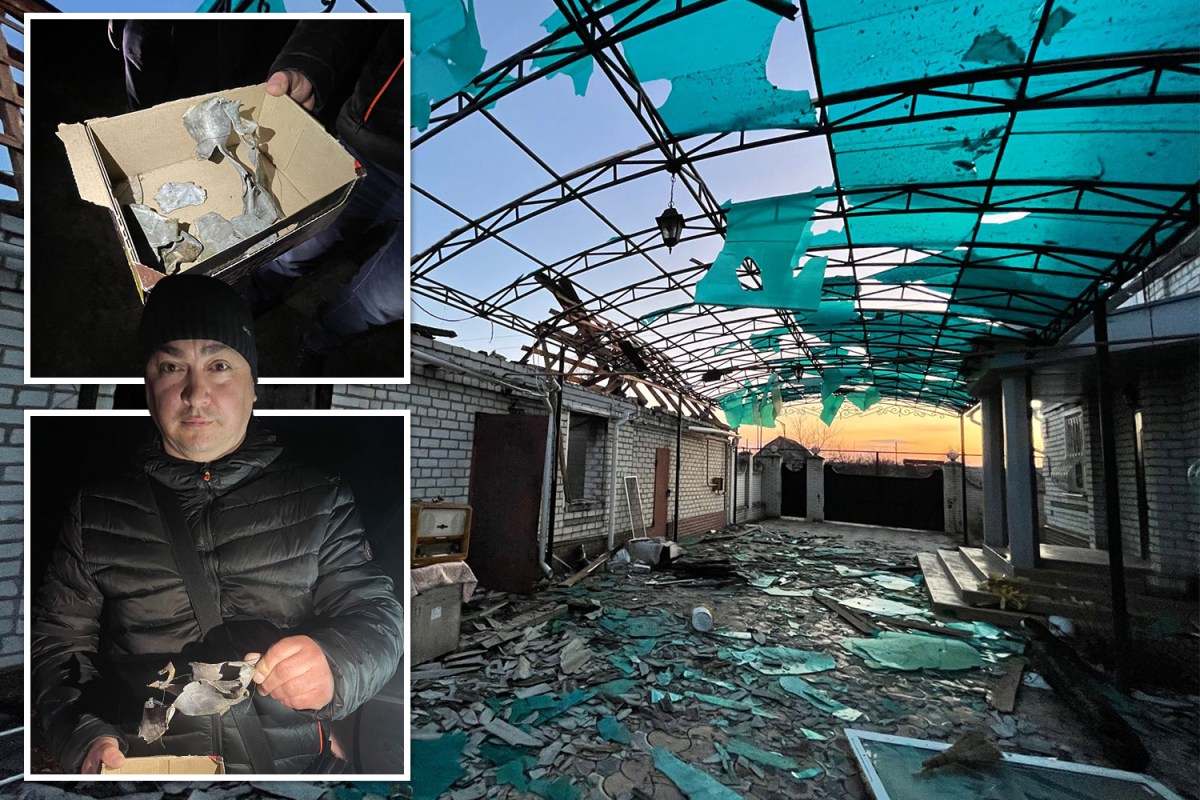 The sun met grandmothers hiding in basements and others resigned to their fate as artillery and machine-gun fire echoed through empty courtyards littered with shrapnel.

“This is the worst thing that has happened since 2014,” said 83-year-old Svetlana Kovalova.

In the tiny village of Muratovo, less than three miles from the front, a dacha has been reduced to rubble by a nighttime rocket attack.

The explosion tore off the roof of the building and ignited the mangled wreckage.

Residents claimed that a barrage of 20 Russian Grads hit their farms from the rebel-held Luhansk enclave.

It was the first Gradov strike since 2015, when the political leaders of the capital Kiev were ready to declare martial law.

Miraculously, no one was hurt in the attack, as most of the rockets landed on farmland. But world leaders have warned of a bloodbath when the 190,000 Russian soldiers camped on Ukraine’s borders are ordered to invade.

Last night, there were rumors of an airstrike being prepared against Kiev, and journalists were ordered to stay in hotels for security reasons.

This came at a time when the prospect of all-out war in the region looked increasingly daunting.

According to the Minister of Digital Transformation of the country, a wave of cyber attacks hit Ukrainian banks yesterday.

Government websites, including those of the government and the Ministry of Foreign Affairs, were unavailable.

Another sign that Russian President Vladimir Putin has begun the attacks was yesterday’s Russian embassy in Kiev, which began evacuating its staff back to Russia.

Back in Muratovo, Mayor Oleg Kurilov said a third of the village’s 600 residents had fled after the Grad shelling, fearing more would follow.

In the nearby town of Shchastia, 73-year-old grandmother Nina Nikolaeva had her windows broken on Monday when a mortar hit a few meters from her house.

She said, “Now there are only old people left here.

“Most of the families and children have left.”

There are only old people here. Most of the families and children have left.

Pavel Reznichenko, 38, leaned out of a broken window on the fourth floor.

He said: “My wife was killed by a shell. I would leave if I could.”

Only the most courageous and desperate dared to go outside yesterday to draw water from communal wells.

Their homes were left without electricity and running water after shells hit a nearby power plant last week.

Olga, 68, said she spent three nights in a basement shelter because of constant shelling.

But when asked if she wanted to go somewhere safer, she gave the same answer as her neighbors: “Where would I go? That’s all what I know”.