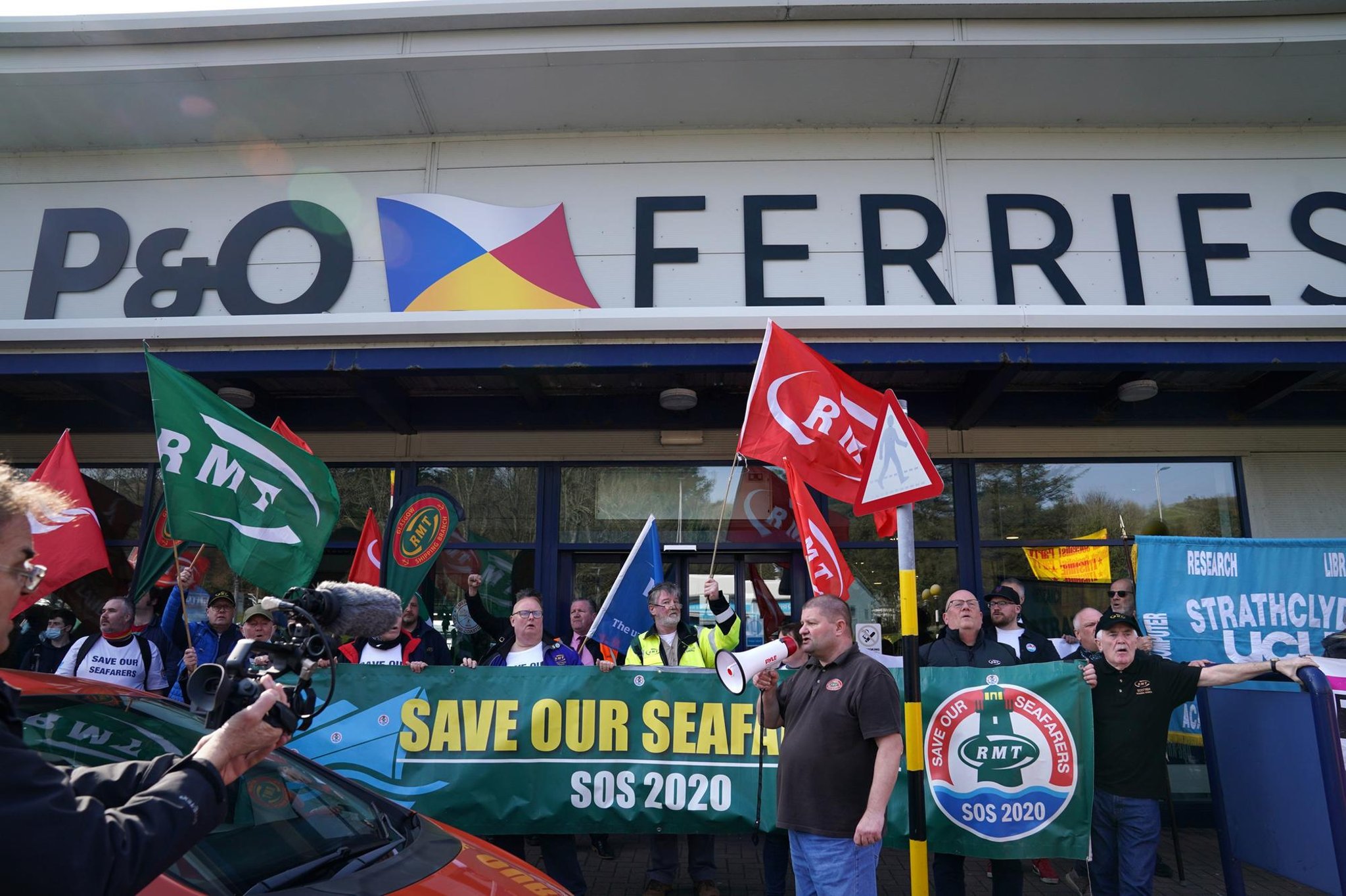 He told the House of Commons that the UK government would “take action” and urged workers to do the same.

His announcement came as the company’s chief executive apologized for the consequences of the decision to fire employees without prior notice.

Peter Hebblethwaite said he understood the “anger and shock” over the loss of his job.

People take part in a protest organized by Rail, Maritime and Transport (RMT) against layoffs of P&O workers at the P&O ferry terminal in Cairnryan. Photo: Andrew Milligan/PA Wire

His announcement comes amid continued protests from unions and workers and follows confirmation that he will appear before MPs on Thursday for questioning about the layoffs.

He said: “I want to apologize to the affected people and their families for the impact this has had on them, as well as to the 2,200 people who are still working at P&O, and they will be asked many difficult questions about this.

“Over the past week, I have spoken face to face with seafarers and their partners. They lost their jobs and it’s anger and shock and I totally understand.

“We needed fundamental changes to make us viable. It was an incredibly difficult decision that we struggled with, but once we realized that this was the only way to save the business, we had to act.

“All other routes led to the closure of P&O Ferries. I wish there was another way, and I’m sorry.”

Mr. Hebblethwaite will appear before joint hearings of the committees on transport and business, energy and industrial strategy on Thursday.

On Wednesday, protests against the layoffs took place in Dover and Liverpool, which were widely condemned by union leaders and politicians.

Hugh Merriman and Darren Jones, committee chairs, said: “The purpose of this meeting is to explore in detail the options available to the 800 workers who were laid off by P&O Ferries last week.

“The brutal nature of their dismissal has put the recruitment practices and UK plc under the microscope.

“From P&O Ferries, our members want to know why this action was taken and how it can be justified.

“We demand confirmation from the government and its agencies that our laws are not violated and the safety of our ships is not compromised.”

Rail, Marine and Transportation General Secretary Mick Lynch said: “Under pressure from Keir Starmer, the Prime Minister said P&O Ferries had broken the law by refusing to notify the government of the layoffs. In fact, he called P&O Ferries liars because the company said today that they did not break the law.

“But while the prime minister said they were suing P&O, at the same time he dropped Keir Starmer’s demand for economic sanctions against the owners of P&O, DP world, to force the reinstatement of P&O workers.”

Mr. Lynch called the P&O statement a “half-hearted apology” and again urged the company to reverse layoffs and reinstate workers.

Nautilus said in a statement: “Our members deserve a decent job with a decent employer, and our work, which has been going on for over 165 years, will continue in this direction.

“However, P&O Ferries went bankrupt from a legal and reputational point of view. They broke the law, and no amount of legal tautology will change that.

“Nautilus International now expects the government to take all possible action against these lawbreakers who think they can buy silence and intimidate seafarers into unemployment or accept lower wages and harmful and unsafe working conditions.”