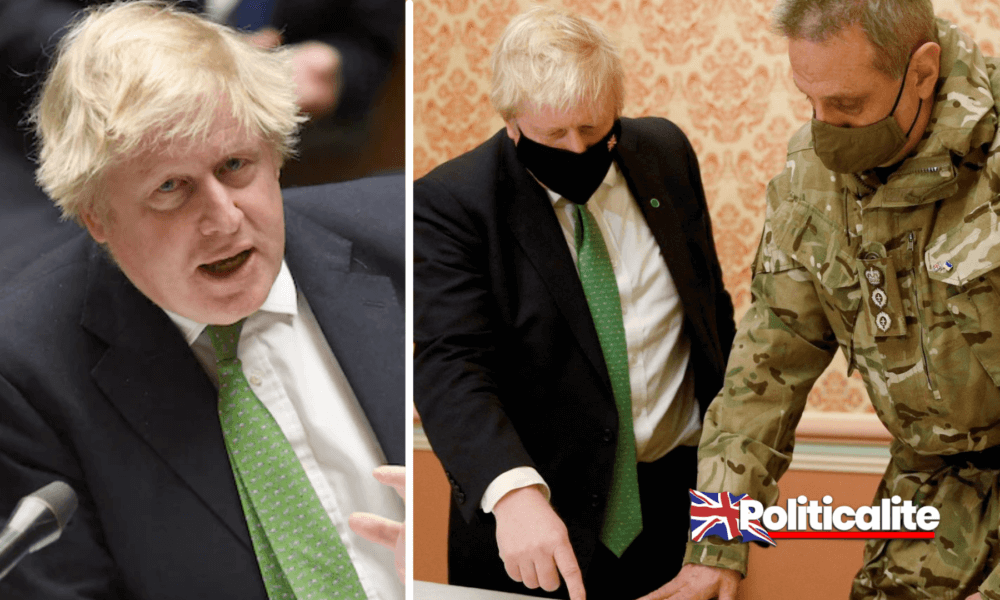 The UK will respond “strongly” to Russia’s actions in Ukraine, the prime minister said.

After the sudden Russian invasion, Johnson declared that Russian President Vladimir Putin had “chosen the path of bloodshed and destruction.” and said that the West and its allies would respond strongly.

A Downing Street spokesman said the prime minister held a Cobra meeting on Thursday morning where they discussed the response to the “terrible attacks”.

“I am shocked by the terrible events in Ukraine and I spoke with President Zelensky to discuss the next steps,” Boris said.

“President Putin has chosen the path of bloodshed and destruction by launching an unprovoked attack on Ukraine.”

“I am shocked by the terrible events in Ukraine and I spoke with President Zelensky to discuss the next steps,” he said.

“The UK and our allies will respond strongly.”

A Downing Street spokesman said Johnson assured Zelensky that the West “will not stand by while President Putin wages his campaign against the Ukrainian people.”

“The Prime Minister has said that he hopes Ukraine can resist and that Ukraine and its people are on the minds of all people in the United Kingdom during this dark time,” the spokesman said.

Putin announced the move during a televised address early Thursday morning, saying the move was in response to threats from Ukraine.

According to him, Russia has no goal of occupying Ukraine, but the responsibility for the bloodshed lies with the Ukrainian “regime”.

He also warned other countries that any attempt to interfere with Russia’s actions would lead to “consequences they have never seen.”

Putin accused the US and its allies of ignoring Russia’s demand to prevent Ukraine from joining NATO and to provide Moscow with security guarantees.

He said the Russian military operation was aimed at ensuring the “demilitarization” of Ukraine, adding that all Ukrainian servicemen who laid down their arms would be able to leave the war zone safely.

The Border Service of Ukraine said that the Russian military attacked the country from neighboring Belarus.

The agency reported that Russian troops opened artillery fire as part of an offensive backed by Belarus.

They said Ukrainian border guards returned fire, adding that there were no immediate reports of casualties.

The British Foreign Office said people should not try to get from Russia to Ukraine.

The official advice was updated on Thursday: “There are several reports of large-scale military activity in Ukraine. You should not try to enter Ukraine from Russia.”

Defense Secretary Ben Wallace described Russia’s actions as “outright aggression against a democratic country” and said no one was fooled by the Kremlin’s “false flags and false narratives.”

This is undisguised aggression against a democratic country that dared to express a desire other than to be a weak-willed neighbor of Russia.”

“No one should forget this day. Putin thinks this land grab is about preserving his legacy – it will be, but not the way he wants.”

“The Russian Federation violated the sovereignty of Ukraine once again today,” he said.

“Despite the efforts of the international community, Russia has chosen conflict. The Kremlin’s fake slogans and fake narratives didn’t fool anyone.”

US President Joe Biden condemned Russia’s decision to launch a military operation in Ukraine as “an unprovoked and unjustified attack,” saying “the world will hold Russia accountable.”

Biden tweeted: “President Zelensky contacted me tonight and we just finished talking. I condemned this unprovoked and unjustified attack by the Russian armed forces. I briefed him on the steps we are taking to provoke international condemnation, including this evening at the UN Security Council.

“He asked me to call on world leaders to speak out clearly against President Putin’s blatant aggression and stand with the people of Ukraine.

“Tomorrow I will meet with G7 leaders and the United States, our allies and partners will impose tough sanctions on Russia.”

“We will continue to provide support and assistance to Ukraine and the Ukrainian people.”

BRITISH STUDENT: I ​​WOKE UP TO EXPLOSIONS

A British-Ukrainian student living in Kiev said she woke up Thursday morning to the sound of explosions.

Valentina Butenko is studying politics at University College London but returned to Ukraine a few weeks ago to offer to help resolve the security crisis.

“I woke up this morning to the sound of an explosion,” the 19-year-old, whose mother is British but grew up in Ukraine, told the PA news agency.

“I live on the outskirts of Kiev, so I expect it to be quite loud for me to hear it.”

“Since 5 a.m., I have been hearing explosions intermittently… the sky has lit up a few times, although now it seems to have calmed down a bit.”

Ms Butenko said “a lot” of people are leaving the Ukrainian capital and roads out of the city are blocked, making it “impossible to leave.”